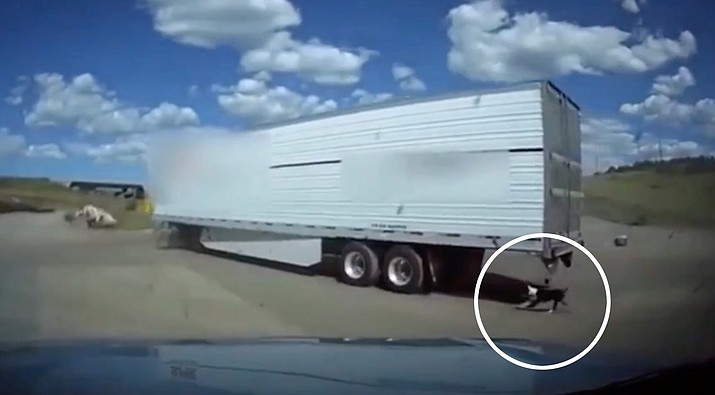 A semi-truck begins to pull out of the parking lot at Murphy's Shell Station on Sept. 8 in Ash Fork. A YCSO Patrol Volunteer in Protection (VIP) used his lights and siren to alert the driver before the dog was severely injured. (Image from YCSO video)

ASH FORK, Ariz. — A dog tied to the back of a semi-truck lived to chew another bone Sept. 8, thanks to the quick actions of a Yavapai County Sheriff’s Office volunteer, who used his patrol vehicle to signal the unknowing truck driver before leaving the parking lot of a gas station.

“(We are) fortunate to have men and women who Volunteer in Protection (Patrol VIP),” said YCSO spokesperson Dwight D'Evelyn in an email, identifying the Patrol VIP as Stephen Edgar.

A YCSO dashcam video shows Edgar leaving the parking lot behind a semi-truck slowly pulling out of Murphy’s Shell Station in Ash Fork to enter Interstate 40.

“He quickly activated his lights and siren to alert the driver, who stopped and was notified about the dog in tow,” D’Evelyn said. “A very grateful owner retrieved his pet and expressed deep appreciation for the VIP’s efforts.”

D’Evelyn said Patrol VIPs act only as eyes and ears when they are in the field, but in this exception, used the lights and siren to save the dog’s life. The action was deemed warranted by YCSO command staff, D'Evelyn added.

“The driver was simply distracted and headed towards the interstate forgetting to unleash his dog. No charges are being sought,” he said.