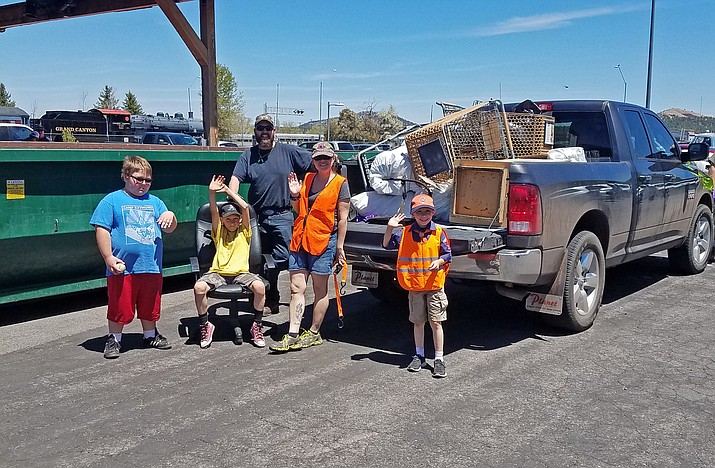 WILLIAMS, Ariz. — Grab your hats and gloves, because it’s time for the fall Community Cleanup Day.

Volunteers will spread out to pick up trash all over town, including at the rodeo grounds, transfer station, schools, along Railroad Avenue, near the cemetery and in the Highland Meadows area. Volunteers should bring gloves and wear a hat and sunscreen. Vests will be provided.

The purpose of the cleanup is to help make the community look better and to instill pride in its citizens.

“Taking some ownership,” said Kerry-Lynn Moede, who helps organize the cleanup. “It’s a lot more fun than people might give it credit for if they’ve never done it and I think they end up getting more out of it than they put into it.”

Arizona Public Service (APS) will provide trash bags for volunteers to use.

Coffee and pastry will be provided in the morning and volunteers can enjoy free hamburgers and hot dogs grilled by American Legion Cordova Post #13 and donated by the city of Williams. The Williams Fire Department will pick up bags along road sides.

Along the cleanup route, volunteers should be on the lookout for Easter eggs containing coupons for cash prizes. Volunteers can also play “You Found WHAT?” game that Moede said this game is especially popular with children.

Formerly the Williams Clean and Beautiful committee organized two cleanup days each year, one in the fall and one in the spring. Moede said the group is a now a non-committee and is a group of volunteers. Roger Ely, a former member of the group said the volunteer group is continuing on with its momentum. He said it involves active members of the community whose goal is to help clean the city.

“The group currently is not officially recognized as the Williams Clean and Beautiful group but considers themselves a group of volunteers who help the community and keep it clean,” he said. “The emphasis is keeping our city clean. We are still attempting to keep it going and we are still planning on doing this twice a year — just as concerned citizens. It’s a core group of people who are always there to help the city.”

This year Moede said a group from the Williams Middle School plan to participate in the event. Additionally, anyone who wants to volunteer but can’t make it that day can agree to pick up trash at a later day.

Finally, residents can get rid of large appliances. Those interested may call the city at (928) 635-4451 to schedule a free appliance pick up or take the appliance to the transfer station themselves.