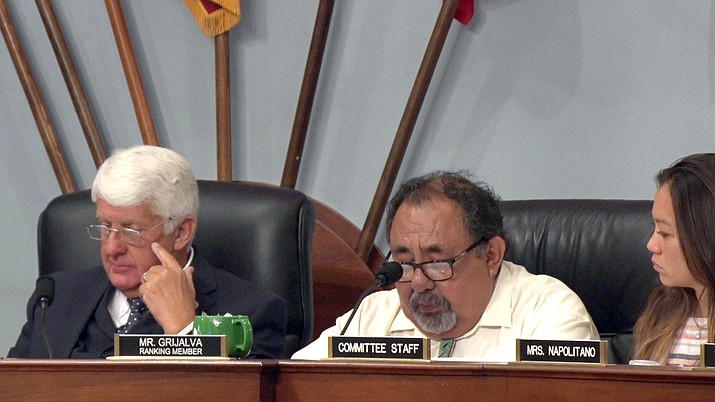 Rep. Rob Bishop, R-Utah, left, and Rep. Raul. Grijalva, D-Tucson, are usually on opposite sides of an issue, but they worked together over the summer to iron out differences on a plan to save the Land and Water Conservation Fund. (Imani Stephens/Cronkite News) 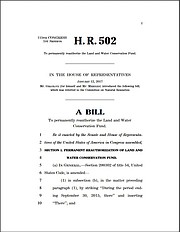 WASHINGTON — A House committee unanimously approved a surprise, bipartisan plan to save a popular land conservation fund Sept. 13, just weeks before it was set to expire.

Reauthorization of the $900 million Land and Water Conservation Fund had stalled as the Republican chairman of the House Natural Resources Committee and the panel’s senior Democrat locked horns over it.

But Rep. Rob Bishop, R-Utah, and Rep. Raul Grijalva, D-Tucson, came together this summer to begin hammering out the agreement that was approved by the committee Sept. 13.

“I was tired of it,” Bishop said after the vote. “I wanted to get it done.”

The bill still needs to work its way through the House and Senate before Sept. 30, when the current fund is set to expire, but lawmakers said they are optimistic that they can make a deal.

But Republicans complained that it had turned into a slush fund over the years for federal land acquisition, mostly in the West, and that local governments were increasingly shoved aside.

Bishop said he has always supported the original idea behind the fund, but he was calling for it to be replaced or removed as far back as 2015, when he wrote a Politico editorial that said the program had been broken for years.

Bishop had been pushing a replacement that would have limited federal land acquisition to a small portion of the fund, with most of the money dedicated to everything from park maintenance to offshore energy exploration to protection of historic battlefields.

That plan also would have limited the amount of land the government could buy in Western states.

But the compromise unveiled did away with most of those restrictions. Instead, it requires that states and the federal government each get 40 percent of the fund and the remaining 20 percent be unallocated, to be used for whatever is needed in a given year.

The measure also restores the fund permanently, removing expiration dates that were in previous bills.

Some committee Republicans were still concerned about the continuing federal acquisition of land at a time when the National Park Service’s maintenance backlog is in the billions of dollars. If the government cannot maintain the land it has now, they said, it shouldn’t be buying more.

“When we hit the $1 billion and $10 billion in deferred maintenance, it seemed clear that we should not be buying land until we get this backlog down,” said Rep. Louie Gohmert, R-Texas.

He was one of several Republicans who tried, unsuccessfully, to amend the bill. Gohmert’s amendment would have required that the government use the fund to chip away at the backlog, rather than buying new land, and another, by Rep. Paul Gosar, R-Prescott, would have forced the federal government to sell an acre of land for every acre it bought.

Bishop agreed that the backlog needs to be dealt with sooner rather than later, but said he could not support the amendments. He said the flexibility of the unallocated 20 percent of the fund is key to a successful, bipartisan reauthorization.

“The fact that we’re not specifying it helps the bill move forward, but gives the flexibility of using it as needs develop,” Bishop said. “And let’s face it — if you’re doing this permanently, needs will change.”

Democrats like Rep. Ruben Gallego, D-Phoenix, agreed that land acquisition needs to be monitored. He said it was important to him that more money be released to the states to complete construction projects that have been left unfinished.

“We’ve had billions of dollars worth of backlog in terms of construction projects that we need to fulfill,” Gallego said. “We’re going to start fulfilling them.”

The LWCF was not the only bipartisan bill approved by the committee. Bishop and Grijalva, typically foes on any issue, crafted the Restore Our Parks and Public Lands Act, which creates funding stream for park maintenance.

Chances for both measures are good: The parks maintenance bill has 130 co-sponsors and the Land and Water Conservation Fund renewal has 232.

“We should be very proud,” Gallego said after the votes. “This is one of our best bipartisan efforts so far.”