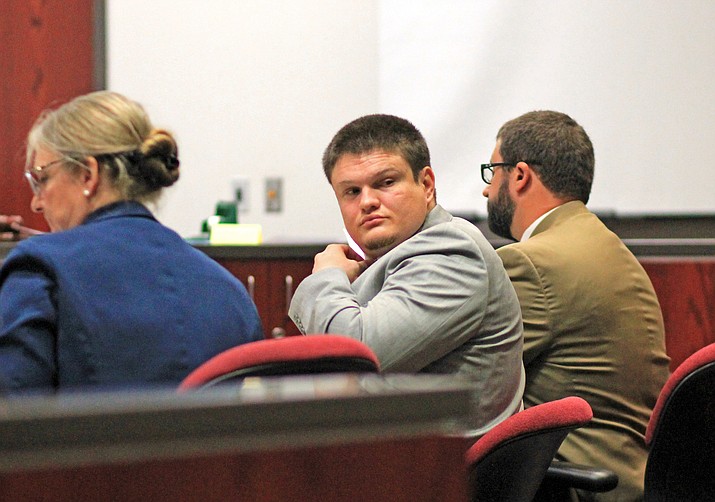 A jury has found Derrick Barnett guilty on all counts in the murder trial of Williams residents Nora and Michael DiMuria.

Barnett was accused of killing the DiMurias in their home on Spring Valley Road in Red Lake, north of Williams May 2, 2017. According to official reports, Barnett broke into the couple’s home, shot them and their dog, and burglarized their home.

Barnett is believed to have stolen the DiMurias’ vehicle and driven it to Cortez, Colorado where he abandoned the vehicle at a campground. On the morning of May 5, the sheriff’s office received a tip from an area resident and Barnett was arrested later that day by Dolores and Montezuma County Sheriff’s deputies after a 30-mile high speed chase.

On Sept. 11, the prosecution and defense presented closing arguments in Barnett’s trial which lasted most of the day.

The prosecution readdressed the timeline of events surrounding the DiMuria’s murders and reminded jurors of the evidence presented during the trial, which included witness testimony and physical evidence.

Barker connected a trail for jurors that began with Barnett leaving Colorado because of domestic troubles which led him to seek help from family in Williams. When his family found out he had violated his probation, a dispute ensued and Barnett struck out on his own in the forest north of Williams. As things became desperate for Barnett, he encountered the community of Red Lake.

“Seeing the DiMuria’s household must have seemed like an oasis in the desert,” said Deputy County Attorney Ammon Barker referring to the items inside the home as motive for the murders.

Although Public Defender Roberta McVickers reiterated that no physical evidence placed Barnett at the scene of the crime, Barker reminded jurors of Barnett’s DNA found on a spoon at a campsite not far from the DiMuria’s home, and a black backpack found nearby with a spatula, .22 caliber ammunition, a Bible with Barnett’s children’s names in it and black latex gloves.

“The black latex gloves are what experts testified would impede or hinder the ability to find DNA or fingerprints,” Barker said.

Barker also reminded jurors of the brass casings found at the scene of the crime that matched the ammunition found in the black backpack. He said experts believe the bullet found in Michael’s neck came from the Marlin rifle that Barnett carried onto the property.

As Barnett burglarized the DiMuria’s home after Michael was killed, Nora returned from work. Barker said it appeared that Nora entered the guest house on the property first, where she left her purse and retrieved a flashlight. Barker said it was unclear whether Nora knew something was amiss at the time.

He said as Nora left the guest house and entered the main residence, she was ambushed by Barnett, who began shooting at her through the back window of the home using the DiMuria’s own 9mm handgun.

“After a 12-hour nursing shift where she is helping people, she is attacked,” Barker said.

Experts said this was an ambush and pursuit, Barker told the jury.

“She was killed with that black flashlight still in her hand and her keys in the other hand,” he said. “She was shot with her husband’s handgun, no more than two feet away.”

He said seven casings and four bullets from the DiMuria’s 9mm handgun were recovered at the home, and the handgun was later found with Barnett in Colorado. A fingerprint on the gun was identified as Barnett’s.

When McVickers began her closing statements, she told the jurors that the prosecution was basing their case on feelings and speculation, not facts.

“What we have is a big guess,” she said.

McVickers said the state stopped investigating once they had a suspect. She said it was inherent bias and the prosecution got tunnel vision. She then pointed out how the state failed to investigate potential leads and could have expanded their DNA testing. She presented other scenarios for how the murders occurred.

She also said the state had no proof that Barnett fired any of the weapons — his DNA was not at the scene and there was no motive to kill the DiMurias.

“There’s no proof he walked on to their property, he could have just hitched a ride with someone to Colorado,” she said.

McVickers said Barnett’s actions in Colorado were not the actions of someone who had just murdered two people.

“He drives in and parks right in front of Shane’s (Gore),” she said. “It’s one block from the police department.”

Barker alleged that Barnett incriminated himself several times in his conversations with family and friends following the murders. He told his uncle that “he is in trouble” and then told his half-brother that he “came into a lot of cash recently and will be going to jail for a long time.”

Barker finished his closing statement with a recorded jailhouse conversation between Barnett and his mother played for jurors and the large crowd gathered at the trial.

In the recording, Barnett suggested that his actions were based on his father removing the trailer from the forest and leaving him alone.

“Everybody abandoned me, what are you talking about? My dad left me in the forest,” he said.

He then continued, “I didn’t have any other way. When people are alone this is what they do. This is how they feel, how they act.”

When his mother asked him if he thought it was everyone else’s fault he said, “No, I’m ready to accept my responsibility, I’m ready to die.”