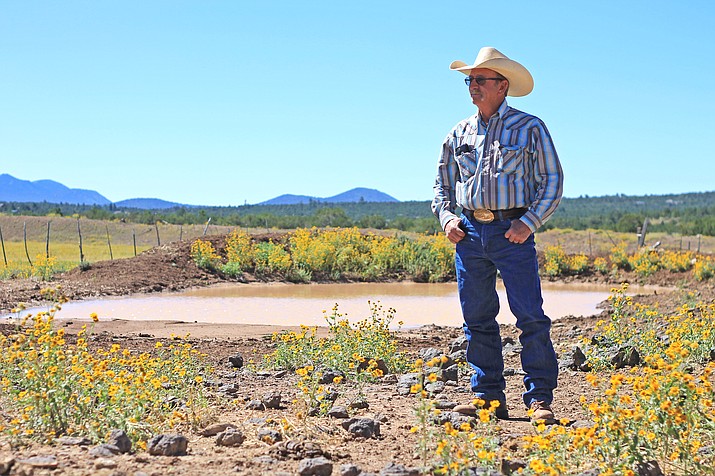 John Mahan looks out over his ranch north of Williams. Mahan found two of his cattle dead under suspicious circumstances Sept. 10, 2018. (Wendy Howell/WGCN)

John Mahan adjusts his well-worn cowboy hat as he leans against his dust-covered Jeep and points toward some juniper trees where, several days ago, he found two of his cattle mysteriously slaughtered. 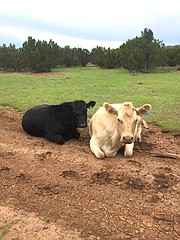 This bull and cow were brutally killed on John Mahan's ranch north of Williams the week of Sept. 2

“I thought they’d been shot. I didn’t realize what had happened,” he said. “There were parts missing — they were mutilated.”

A cow and a bull were both killed overnight. An ear cut off. A section of hide detached. The scrotum and penis carefully removed. The vaginal cavity gone. The blood drained.

No discernible tracks were found near the carcasses, which were lying near an infrequently traveled road. Little blood was found on the ground and the cow was wedged up into a tree as if trying to escape from something.

In his decades of living in the scrubby pinyon-juniper forests north of Williams, the 66-year-old Mahan has raised horses and small herds of cattle and seen animals killed by predators such as mountain lions and coyotes. He has witnessed scavengers such as ravens and vultures picking at carrion, but never has he witnessed the deliberate dismemberment he saw last week.

“For people to come out and purposely kill and mutilate an animal for their own pleasure is just unreal. It’s sickening,” he said as he tucked his weather-beaten hands into his well-worn pockets.

On Sept. 8, Mahan went out to his pasture 20 minutes north of Williams to round up his small herd of 15 cows, including an 18-month-old Angus bull, to begin branding. The bull had not been seen since the previous Wednesday and also missing was a pregnant cow.

With the alarm raised, Mahan and other family members began searching for the missing cattle.

“This was our first bull and our first cow, we were just getting started on building this herd,” Mahan said.

After searching over the weekend, Mahan said they were alerted by swarming birds and a putrid smell Sept. 10 that led to the dead bull hidden from the main road in a maze of juniper trees. A few yards away from the bull was the dead cow, visible from an unmaintained road on the Mahan’s ranch.

“I just assumed they had been shot,” Mahan said. “I didn’t realize what had happened to them until the inspector showed me. They didn’t take any edible meat, just the genitals.”

The Mahan family has held the lease to the state land parcels for nearly 70 years, mostly raising horses and just a few cattle on the pastures.

The family had collaborated on purchasing the animals with extended family members, pooling together to build the herd. The bull and cow were purchased last summer.

“We had raised them all winter — the bull was really coming into his own,” Mahan said. “He’s a purebred Angus with papers.”

Because of the late monsoon arrival, the small herd had only been moved to the pasture in mid-July, and had been hand raised before being turned out.

“It seems really weird they would go after such a small herd,” Mahan said. “I don’t know if they travel those roads or what, but those cows had been hanging out right there for the last week or so, staying right near a little pond of water on that side of the road.”

After Mahan discovered the dead cattle, he put a call into Arizona Livestock Inspector Royal Reidhead, who met Mahan the afternoon of Sept. 11 on the ranch. Reidhead lives nearby; the cattle would be the latest in a string of strangely mutilated cattle that he has investigated in the two years he has been on the job. 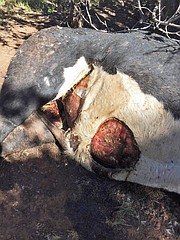 An investigation revealed that John Mahan's bull died after being tranquilized and dismembered.

“I know these people, I’ve been around this area for a really long time,” Reidhead said. “I’m close friends with many of the ranchers out here.”

When Reidhead arrived at the site of the killings, he said he knew right away something was amiss. The cow was driven up into a tree and appeared to have been spooked, he said.

Using a metal detector, Reidhead looked for any sign of shell casings or bullet fragments on the ground or in the animals. He also noticed few signs of scavenging.

“These animals were killed by a drug, they were not killed by any kind of bullet,” he said. “They were basically killed for their body parts.”

Reidhead said the lack of scavengers on the carcasses was a clue.

“We found the cattle almost a week after they were dead and not a single coyote, not a single bird, squirrel, chipmunk or whatever has even gotten near them,” he said. “Animals that have any kind of bad toxins inside their blood and inside their meat —most predators won’t touch them.”

Reidhead said he is continuing his investigation but so far has found limited signs of human activity at the sites.

“The people who are doing this, I would say are professionals,” he said. “They know what they are doing.”

Reidhead said cattle inspectors have been investigating cattle mutilations for decades in Arizona, and he has investigated several since he began the job in 2016.

“The people who are doing this, I would say are professionals. They know

what they are doing.”

“My area is from Winslow to the east, Clint’s Well to the south, Grand Canyon to the north and parts of Seligman to the west,” he said. “I’ve investigated these types of incidents in Ash Fork, Paulden, Winslow near Twin Arrows and north of Metzgers.”

In Flagstaff, the 90,000-acre Flying M Ranch reported similar style mutilations on their cattle. In a 2016 Arizona Daily Sun article, Kit Metzger said her ranch has seen killings like this for nearly 30 years.

“It seems that once they went public, the mutilations stopped,” Reidhead said about the Flying M Ranch.

Reidhead said the cuts seen on the mutilated animals in northern Arizona are precise.

Reidhead said most of the mutilation types of killings he has seen are on smaller hobby farms and small ranches.

“A lot of times on big ranches, the ranchers don’t suspect this is happening,” he said. “These ranches are so big that they might not even find the missing animals, or when they are found there is no evidence left.”

Frank McNelly’s family has been ranching in the Williams are since the 1950s with a cow-calf operation that supports three families.

McNelly said they occasionally have animals go missing and will find a random dead animal on the ranch, but have yet to notice if one has been mutilated like the Mahan’s cattle.

“They die sometimes, and you wonder what happened,” he said. “Sometimes they get run over, there is lightning and there are also poisonous weeds. Once the critters get them, it can be hard to tell. Animals die sometimes, that’s just the way it goes.”

Reidhead believes that whoever mutilated and killed Mahan’s cattle has a local connection.

“These cows haven’t been here but eight or nine weeks,” Reidhead said. “It took somebody who knew they were in here to find them. These cows weren’t advertised, you don’t see them every day. There is so much vegetation that your visibility is 30 to 40 feet.”

Reidhead said the value of the bull, cow and unborn calf is close to $7,000, and he is asking for the public’s help in solving the case. He believes somebody knows something about the crime.

“The people who are doing this to these animals, to these beef cows, are taking clothes off people’s backs and food off their table. That’s a big hit,” he said. “It’s unreal. It’s sickening.”

Anyone with information about this incident or any other concerns about livestock in the area is asked to call Reidhead through the Arizona Department of Livestock dispatch number at (623) 445-0281.