Vikings crush Bagdad in redemption game, 65-12
Vikings make it three-in-a-row with overpowering win over Bagdad Sept. 6, move to 3-0 on the season 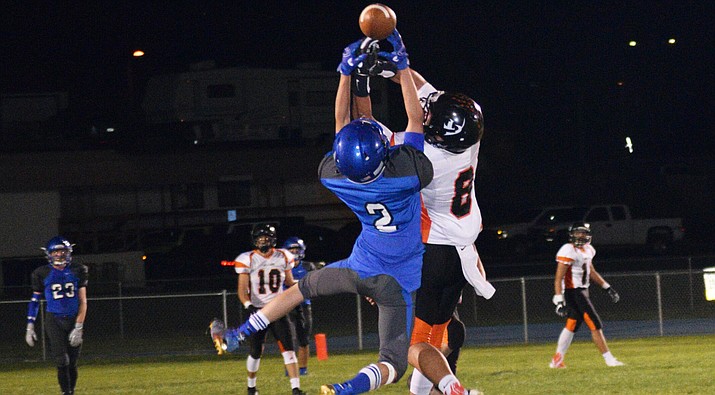 Viking David Lozano intercepts the ball during a game with the Bagdad Sultans. The Vikings beat the Sultans 65-12 Sept. 8. (Photo/Sylvia Andrews)

WILLIAMS, Ariz. — The Bagdad Sultans took a thumping on their home turf Sept. 7, when the Williams Vikings rolled-over the Sultans 65-12, avenging a 2017 loss still in the memory of the players and fans who witnessed it.

The Vikings appeared to barely notice the Sultans defense as they brought in touchdown after touchdown in the lop-sided game. The Vikings’ offense pulled in 29 in the first quarter, 22 in the second and 14 in the third, all but finishing the contest before Bagdad finally scored in the fourth quarter against the Viking’s second team.

“We’re rolling on all cylinders now,” said head coach Jeff Brownlee. “We always want to give Bagdad a good game and obviously this was our year and we took advantage of it.”

Brownlee said he is proud of all three phases of the Viking’s game, but especially the performance of the special teams.

“David Lozano is a guy who can kick the ball and pin teams deep in their area,” Brownlee said. “That is just a big factor.”

With Bagdad pinned back, the Vikings defense was able to overwhelm the Sultan’s offense and keep them from moving the ball, Brownlee said.

“They play very well as a unit, they play great gap-controlled football and are very disciplined,” he said.

Because of the defense, Williams’ offensive leaders were able to capitalize on short yardage and explosive touchdowns.

“We don’t have to do long drives,” Brownlee said.

“How would you like to handle Chance Pearson and Alex Garrett in the backfield?” Brownlee said. “It’s hard for teams to handle that one-two punch.

Payne connected on four of six passes for 71 yards.

Brownlee’s Vikings returned in 2017 with a goal of returning to the state championship, which they did in style.

However, early in the season the Sultans again dealt the Vikings a blow when they beat the team with a desperation pass from Israel Loveall to Scott Finnerty with 3 seconds left in the game.

Expecting a rematch with the Sultans at the state championship, the Bagdad team was surprisingly eliminated in the semifinals by Superior.

That semifinal loss allowed the Vikings to face the Panthers and bring home the title, but many still yearned for a rematch with the Sultans.

“There is no question that Bagdad has had our number for the two years in-a-row,” Brownlee said.

Bagdad has made it to the state championship every year since 2012, except for 2017 when they lost to Superior 44-34 at the state semifinals. Bagdad brought home the title in 2013 with a 44-20 win over Mogollon and the 2016 win over Williams.

Williams has moved between 8-man and 11-man football over the years, but has been in 8-man since 2015. The Vikings made it to the state championships in 2016 and 2017, bringing home the championship trophy in 2017.