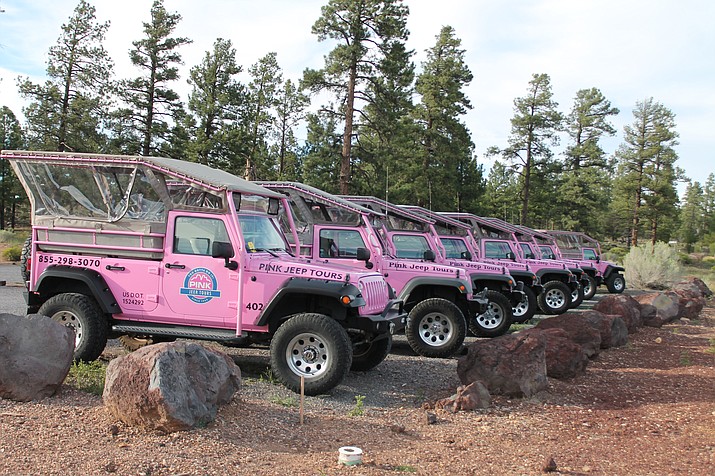 Pink Jeep tour vehicles were moved to the property in from of the National Geographic Visitor Center to deter vandalism. (Erin Ford/WGCN)

TUSAYAN, Ariz. — Pink Jeep employees in Tusayan found a surprise waiting for them as they prepared for tours Aug. 25.

Suspects went onto the property behind the National Geographic Visitor Center and punctured gas lines in four vehicles to steal gasoline.

Romy Murphy, Pink Jeep Tours’ general manager, said there were security cameras in the area, but the vandals chose four vehicles in an area where the camera was not directly pointed. Murphy said the theft went unnoticed in the initial inspection but was discovered when employees attempted to put fuel in the vehicles.

According to Murphy, siphoning gas out of the tanks is difficult, thanks to a theft deterrent system built into the tank.

“The way the tanks are made, it’s not easy to get much suction,” she said. “When we looked at it, we figured they knew something, but they learned along the way. Each tank was tampered with in a slightly different way.”

Murphy said in total, about a quarter of a tank of fuel was taken from each affected vehicle.

“We got really lucky with where they tampered with it,” Murphy said. “It could have been very dangerous.”

Although Murphy said it was likely a one-time occurrence and the thieves have moved on, the tour provider has stepped up security to prevent further incidents. The vehicles have all been moved to the front of the property where there is more visibility, Murphy said, and new security cameras have been added around the area.

Anyone with information about the vandalism is encouraged to call the Coconino County Silent Witness tip line at (877) 292-7463.