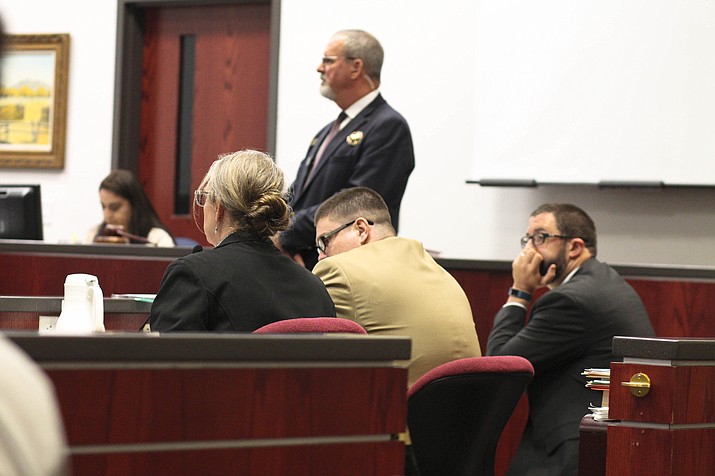 Derrick Barnett is on trial for the 2017 murders of Michael and Nora DiMuria. (Photo/WGCN)

Barnett is accused of killing 67-year-old Michael DiMuria and 64-year-old Nora DiMuria at their home in the Red Lake area of Williams in May 2017.

Brandon Nabozny, an expert witness from Forza Forensics in Phoenix, provided a lengthy testimony Aug. 24 to the 15 jurors at the trial regarding evidence found at the scene.

Nabozny specializes in forensic photography, crime scene, latent prints and forensic chemistry, and provided a detailed analysis of the evidence collected at the DiMuria home following the murders.

Nabozny said he was called to the home at the request of Coconino County Sheriff’s Office and became the head of the crime scene investigation. Most of his time was spent collecting evidence from the interior of the home.

Nabozny described finding numerous tools — including hammers, a chisel and bolt cutters — in the entry way and living room of the home. He found red liquid he believed to be wine dripped across the living room floor and kitchen. Broken glass was found in the kitchen and living room, mixed in with numerous metal fragments he believed were from firearms. He identified numerous household items with broken fragments and chips, and various holes in furnishings throughout the home.

Dr. Larry Czarnecki, Coconino County Medical Examiner, testified Aug. 30 regarding the cause of death for Michael and Nora, and their dog T.C.

Czarnecki has been a medical examiner for 13 years and said most exams he performs are typically done away from the scene, but in the case of the DiMurias he was asked to come to the scene since a suspect had not been found.

“In some cases, if there is imminent danger to the community, I will go to the scene,” he said. “I felt like there was a potential danger and thought there might be something I saw that could help them.”

Czarnecki said he began with a necropsy of the DiMurias’ dog. He said based on initial x-rays, he could see metal fragments and a large object at the front of the dog’s neck. Upon his exam, he found the dog had been shot at the top of the head and the bullet lodged in the front of the neck. He said although he is not a firearms expert, he believed the bullet was a .22-.25 caliber.

Czarnecki next examined Michael and found three gunshot wounds to the head. He said one appeared to have entered the left cheek, one under his chin and one at the back of his head. Based on his internal and external exams, he determined the cause of death for Michael was the gunshot wounds.

Czarnecki said he was unable to determine the sequence or time between the gunshots, although he determined the caliber of the bullet fragments to be .22 - .25 caliber also.

“On closer examination, I looked at these little marks and found particles consistent with gunpowder in those injuries and this gives me an idea of how far that muzzle was when it was fired,” he said.

Czarnecki said all other wounds on Nora and Michael did not reveal any evidence to suggest how close the firearm was when fired.

“So these injuries were not associated with the gunshot wounds to the top of the head or to the arm,” Czarnecki said. “That being said, I can’t say much about those gunshot wounds, but the fact this is on the wrist indicates that the muzzle of that weapon was at the most two feet away when fired.”

Czarnecki said no bullet fragments were found inside Nora’s body.

Czarnecki said the toxicology results showed that Michael and Nora both had caffeine and nicotine in their bodies at the time of death.

Barker asked Czarnecki if this could indicate that Nora had used an e-cigarette, which he said “yes.”

Public Defender Roberta McVickers cross-examined Czarnecki and asked if he was able to determine who was killed first in the home and the time of each death.

“It’s a window of time, sometimes I can narrow it down, but I cannot give an accurate time of death,” he said.

Dick was asked by Nabozny to assist with the crime scene. She said she looked at approximately 30 items for DNA evidence.

“That is a lot, we usually keep it five per case or less,” she said.

Dick said from each item she would generate the DNA profile and chart it on a spreadsheet and do the same with the known reference samples of the case — the victim, suspect and anyone else involved in the case.

She then compares the question sample to the known sample and goes through each location.

She used DNA reference samples from both Michael and Nora and Derrick Barnett.

Dick said she looks at 23 locations in the DNA profile and found that Barnett’s DNA matched all 23 locations for the swab taken from the Jeep Liberty steering wheel and the vehicle’s gear shift.

Barnett’s DNA was also found on a water bottle left in the Jeep Liberty and a plastic spoon found at a campsite in Williams.

Barnett’s DNA was also found on an e-cigarette in a backpack in Colorado, along with the DNA from Nora.

Starr Douglas, a latent print expert with the Arizona DPS, testified Sept. 6. She said she examined over 16 items, and made identifications on four of them. She said one item, a 9mm handgun, had the fingerprint of Barnett.

The trial is set continues this week, with closing arguments set for Sept. 11.