Northern Arizona Astronomy: The changing history of planets in our solar system 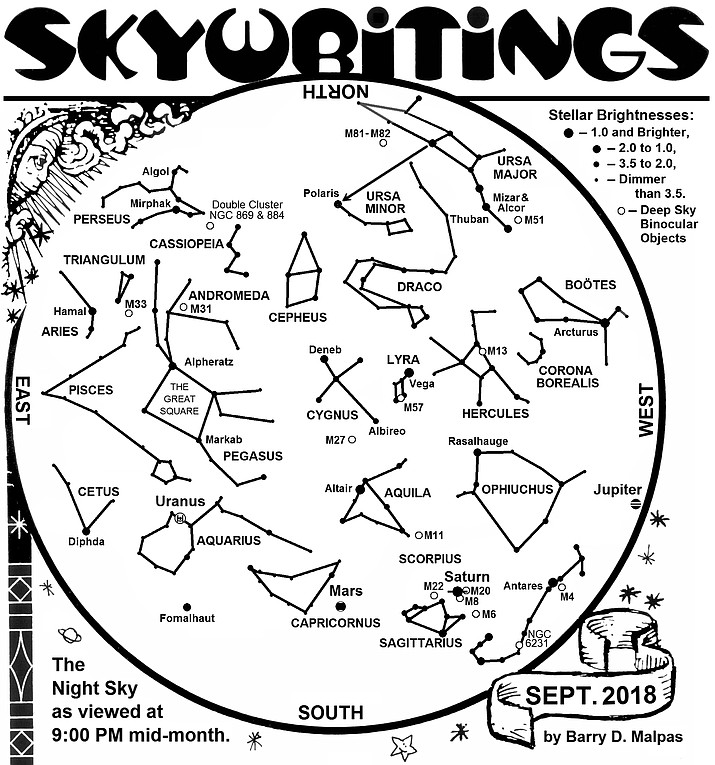 While I was growing up in the 1960’s, astronomy seemed to have most of the basic answers, especially concerning our solar system.

There was the sun, and it’s easy to remember nine planets, but in 2006 the International Astronomical Union updated the definition of planet, which demoted Pluto to what they now call a dwarf planet.

However, the planets (from Greek, meaning “wanderer”) for most of human history included seven celestial objects — Mercury, Venus, Mars, Jupiter, Saturn, the sun and moon — because, unlike stars, they were the worlds that wandered across the skies.

The seven days of the week are named for them — Sunday (Sun), Monday (Moon), Tuesday (Tiw or Mars), Wednesday (Woden, or Mercury), Thursday (Thor or Jupiter), Friday (Frigg or Venus) and Saturday (Saturn) — their etymologies originating from either Latin or Norse-Germanic.

The seven planets residing in the celestial domain of the gods is the reason for the seven -day week.

It was realized from the works and observations of Nicholas Copernicus, Johannes Kepler and Galileo Galilee that the sun and moon were unlike the other planets, and Earth itself was a planet. The list was changed to include Mercury, Venus, Earth, Mars, Jupiter and Saturn, and remained so for about two centuries.

In 1596, while analyzing the astronomical data of Tycho Brahe, Kepler noticed a wide gap between the orbits of Mars and Jupiter and suggested there should be a planet there.

By the early 1700s it was noted that there seemed to be a numeric pattern that described the planetary orbital distances, which also suggested a missing planet between Mars and Jupiter.

In 1781, British astronomer William Herschel reported the appearance of a new comet. But other observers noted it had no tail and appeared disk-like in their telescopes, making it the first planet to be discovered since antiquity.

Herschel named it Georgium Sidus, after his benefactor, King George III. However, other Europeans were against naming a planet after a living monarch and wanted to call it Herschel, after its discoverer.

Continuing the Roman god nomenclature, it was eventually named Uranus. This new seventh planet’s orbit matched the Titus-Bode Law almost perfectly and an international hunt for the missing planet between Mars and Jupiter began.

In 1801, astronomer Giuseppe Piazzi observed a dim object which he named Ceres, after the Roman goddess of Agriculture. Pallas was then discovered in 1802 by Heinrich Olbers of Germany.

A third object, Juno, was located by German observer Karl Harding in 1804, and a fourth in 1807 (Vesta) again by Olbers, each one adding to the planetary count. But it became clear that they were not planets in the traditional sense as they all resided in approximately the same orbital region around the sun. They were relegated to being called asteroids, and the planetary count went from more than eleven back to seven.

Though Uranus was in the correct place according to the Titus-Bode Law, over time it did not seem to obey Newton’s orbital laws. It was postulated there might be another large planet further out whose gravitational forces might be tugging on Uranus.

The mathematician Urbain Le Verrier made calculations as to where to look and sent the coordinates to astronomer Johann Galle, who located the eighth planet, Neptune, in 1846 within one degree of the predicted position.

But Neptune as well seemed to have a gravitational tugging problem, so observers continued the quest. In 1930, after a systematic search revealed what seemed to be a ninth planet (though measurements showed it to be much smaller than the other outer worlds), because it orbited the sun, it was classified a planet and named Pluto, after the Roman god of the underworld.

In 1995, astronomers began discovering several more worlds beyond Neptune as large as Pluto, and in 2003 they identified one a bit larger, now called Eris. Since then, over a thousand objects have been identified orbiting the sun beyond Neptune and, like the asteroid belt, the region where these bodies orbit is now called the Kuiper Belt. It is home to Pluto, Eris, other Dwarf Planets and more asteroids.

So, we are now back having eight planets, several Dwarf Planets and two asteroid regions. But Neptune is still being tugged at, so the quest continues.

Members of the Coconino Astronomical Society, in conjunction with the city of Williams, will host its monthly Star Party Sept. 14 from 7:30 to 9:30 p.m., at Glassburn Park, in the natural area west of Rod’s Steakhouse parking lot. Several large telescopes will be on hand to view the moon, planets and other celestial objects.