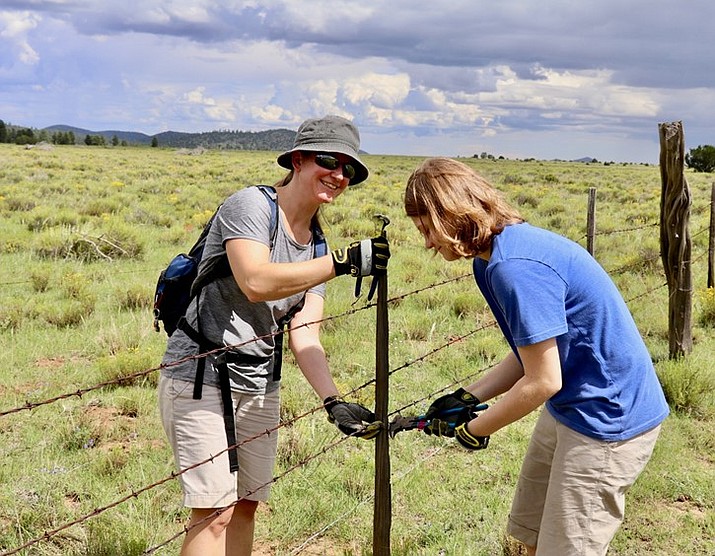 The volunteers, largely brought together through the dedication and focus of the Arizona Antelope Foundation, modified more than four miles of fencing in an area on the Williams Ranger District about eight miles north of the community of Parks. The fence modification work included removing the bottom barbed wires and replacing them with smooth wire at a height of 18 inches from the ground. This height allows pronghorn to easily slip under the fences without the risk of injury. Pronghorn rarely jump fences, rather preferring to go underneath them.

“Multiple research studies in northern Arizona have shown that pronghorn populations are being fragmented by fences and roads to the point that populations are suffering genetic consequences,” said Jeff Gagnon, statewide research biologist with the Arizona Game and Fish Department. “While the fragmentation of habitat affects many wildlife species, pronghorn are particularly vulnerable in our state. It is important that we take steps to ensure pronghorn population persistence.”

The project uses GPS locations from collared pronghorn to identify barriers and potential corridors for improvements. On the Kaibab National Forest, the team of partners and volunteers has modified nearly 18 miles of fence since the effort began. Similar work has been accomplished on the Coconino National Forest and state and private lands.

“To help our current pronghorn populations persist, fences can be modified, grasslands can be restored, water can be made available, and the list goes on,” states an article entitled “A Data-Driven Approach to Reconnecting Pronghorn Populations North of I-40; Collaboration at its Best,” which was written by Gagnon and his colleagues Chad Loberger and Scott Sprague of the Arizona Game and Fish Department. “In all cases, the cooperation and collaboration of multiple stakeholders is required to help get today’s pronghorn to tomorrow.”

Not only is the GPS collar data collected from this project used to identify and correct barriers to pronghorn movement, but it is also made available to inform the planning and implementation of forest and grassland restoration work, such as that associated with the Four Forest Restoration Initiative.

“We are grateful to have partners and volunteers who care as deeply about the health of our forests and wildlife populations as we do,” said Roger Joos, wildlife biologist with the Kaibab National Forest. “We have been partnering on these efforts for many years and have had incredible successes not only in terms of the number of miles of fence modified but also in the acres of grasslands and savannas restored. We could not achieve these results without the continued commitment of our partners.”

The efforts earlier this month were just one example of ongoing work to promote healthy pronghorn populations in northern Arizona. The work will continue indefinitely, with upcoming volunteer and partner projects to shift south of Interstate 40 over the next several years.

More information or to become an Arizona Antelope Foundation volunteer or member is available at https://azantelope.org/. The Arizona Antelope Foundation’s mission is to actively seek to increase pronghorn populations in Arizona through habitat improvements, habitat acquisition, the translocation of animals to historic range, and public comment on activities affecting pronghorn and their habitat.