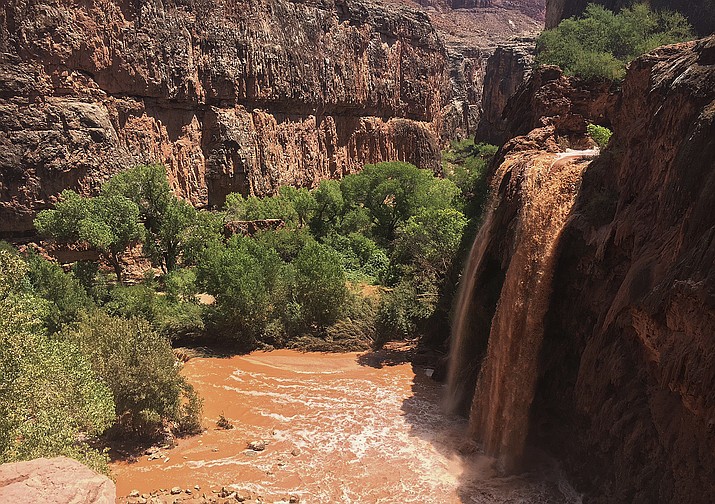 SUPAI, Ariz. — Lodging and tourism facilities will reopen on the Havasupai Reservation more than a month after a catastrophic flash flood tore through the campground.

Several waves of flooding hit Supai village and Havasu campground July 10 and 11, stranding 200 tourists and washing out trails and footbridges. The storm caused thousands of dollars’ worth of damage to facilities, forcing the tribe to close down all tourism, the main driver of its economy. Supai was cut off from most necessities, such as food, mail and medical supplies, for several weeks as tribal and National Park Service crews worked to removed large boulders blocking the only trail into and out of the village.

The tribe reported Aug. 29, however, that all necessary repairs have been completed and the campground and lodge will reopen as planned Sept. 1. Tribal officials advise visitors to be prepared for rain storms typically associated with monsoon season, which can last through the end of September.

Tourists and tribal members weren’t the only ones affected by July’s floods — animals on the reservation were also impacted. To help replenish food stores for the animals, the Humane Society of the United States donated about $5,000 worth of food and supplies.

“We were saddened to learn of the recent damage from flooding in Supai, a village we visit several times a year to provide care and treatment to area animals as a part of our partnership with the Havasupai Tribe,” said Kellye Pinkleton, Arizona’s senior state director for HSUS.  “We were honored to provide feed and hay to area horses, dogs and cats to assist in their disaster recovery efforts.”

Among the items delivered were 20 50-pound bags of dog food; 10 40-pound bags of cat food; 40 salt blocks; 12 bales of Bermuda hay; 12 bales of alfalfa hay and 320 50-pound bags of horse feed. The supplies were purchased from Olsen’s Grain in Flagstaff and were transported by the Coconino County Emergency Management Department to a storage warehouse maintained by the tribe, whose animal control office will be responsible for distribution of the items to tribal members.

“The unstable and dangerous conditions of the affected areas make it difficult for us to get the needed supplies for our animals in Supai,” said Havasupai Chairwoman Muriel Coochwytewa.  “We are grateful for the ongoing support from the Humane Society of the United States.”