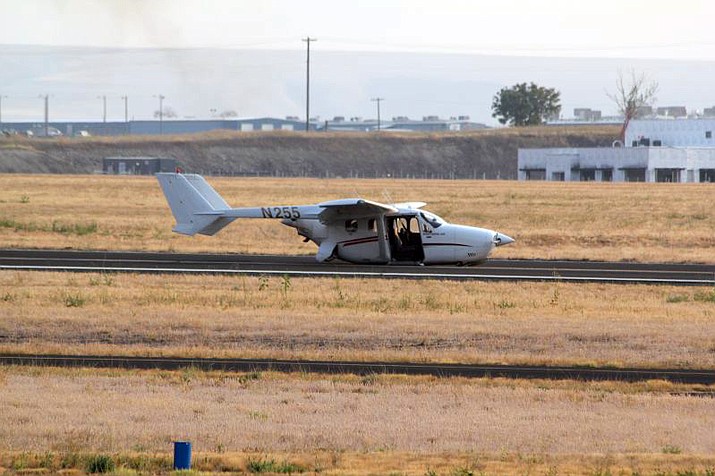 The pilot and passenger avoided injuries after their plane was forced to land on its belly following a landing-gear malfunction Aug. 8. (Photo/Greg Craber)

LEWISTON, Idaho — A plane that came down Aug. 8 with no landing gear was part of the team fighting the Rattlesnake Creek Fire.  The pilot was contracted to work with the team, and the passenger was a Forest Service air tactical supervisor.

As if fighting a fire isn’t stressful enough, the pilot radioed the Lewiston Nez Perce County Airport well ahead of the landing notifying them that he was having mechanical issues and couldn’t get the landing gear to come down.

He and his passenger flew to the airport, circled once, and then skidded to a stop on the belly of the plane on an empty runway at about 6:15 p.m.  A release from the Lewiston Fire Department shows that both men were checked out and were medically fine.  The Rattlesnake Creek Fire crew does not know who the men are.  A new team just took control of the fire.

A preliminary report issued by the National Transportation Safety Board indicated that the circlips — small, flexible metal rings that hold the landing gear’s actuator rods in place near the door — had come loose, allowing the rods to hyperextend and spill the gear’s hydraulic fluid.

After attempts to correct the problem failed, the pilot circled to burn excess fuel to help prevent a fire during the gear-up landing. The pilot was able to land the plane on its belly and both he and his passenger exited the plane without injuries. According to NTSB investigators, the plane sustained substantial damage.