What happens to the forest after a wildfire?
A special team of soil scientists assess the Kaibab's ability to recover following wildfires 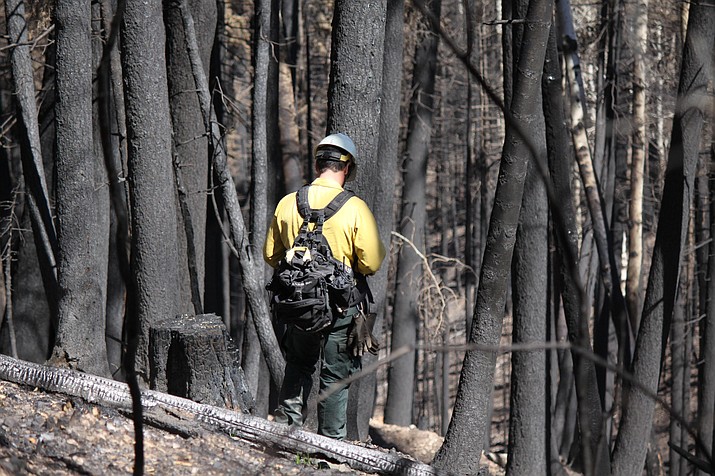 GRAND CANYON, Ariz. — As wildfires tear through acres and acres of forest, onlookers are often horrified when they see the charred remains of a once-lush landscape.

But in order for that landscape to thrive, fire is crucial – long before mankind was hacking out its early existence in the forests of northern Arizona, lighting-caused fires were molding the vast stretches of ponderosa pine and scrub-covered outcroppings.

Kiesow conducts a soil water repellency test to to assess burn severity of soils and assess the viability of roots to help mitigate erosion from potential damaging rain events. (Photo/KNF)

According to Kaibab National Forest spokeswoman Jackie Banks, only a very small percentage of fires on the Kaibab are actively suppressed. In 2017, for example, out of the roughly 13,000 acres that burned, only about 300 were managed with an objective to suppress the flames – that’s just over 2 percent. The rest, Banks said, were allowed to burn in order to benefit the forest ecosystem.

“Many wildfires cause minimal damage and pose few, if any, threats to land or people,” Banks said. “The Kaibab National Forest and neighboring forests are part of a fire-adapted ecosystem and … they are dependent on fire to play a natural role in in maintaining forest health.”

Some fires, however, need to be suppressed because threats to nearby communities, cultural resources or regional water supplies outweigh the benefits to forest health.

That’s where Micah Kiesow and Kit Macdonald come in.

Kiesow and Macdonald are part of the Burned Area Emergency Response (BAER) team. Once a fire has been contained, the BAER team visits the site, often before the flames are even extinguished to assess the situation and determine of action is needed.

At the same time, a local fire organization is on the ground repairing damage to the landscape caused by suppression. For example, a forest road may be widened to accommodate more vehicles, dozer lines may need to be filled in, and water control features could be put in place to control the amount of water that can traverse the burned ground.

As it turns out, in northern Arizona, water is the worst enemy of wildfire recovery. Kiesow said areas like the Kaibab are particularly vulnerable, since monsoonal rains often come right after burn events. Kit Macdonald, soils and watershed program manager for the Kaibab and Coconino National Forests, said getting water diversion methods in place is integral to repair operations. It’s also a major cost-saving exercise to keep erosion from destroying roads, which would then need to be repaired themselves.

“In fire suppression repair, the local fire shop will put in water bars to capture any water that comes on to the road and divert it quickly and frequently so we don’t have erosion of the road’s surface and diminished water quality,” he said. “We’re trying to get the water to go where we want it to go.”

Macdonald said crews might also spread mulch to help stabilize the ground where a fire line was created, or on the slope of a hill to prevent more water from running onto the road. Crews could also bring in heavy equipment to till up the ground if it was used for a helispot — this helps decompact the ground and prevent more water damage.

This process is made more complicated by the fact that most wildfires are immediately followed by monsoon season, Banks said.

“In our area, we get wildfires and then we go right into monsoon season, so it makes for a more complex and potentially more challenging situation,” she said.

“We’re right up against the monsoon, the clock is really ticking on us to get fire suppression repair done and any BAER treatments,” Macdonald added.

BAER’s responsibility is to assess the damage to the area and determine if repair work is needed to prevent more severe damage from the next major water event, or storm. Each BAER team comprises experts who carefully assess potential risks to their field, such as archaeologists searching for cultural sites or resources that may be compromised or need special attention. Hydrologists are often on site to pinpoint areas where a high occurrence of erosion is possible or likely.

To test the burn severity of an area, Kiesow or Macdonald look to the ground for answers. While most people noticed blackened tree trunks or widespread deforestation, the soil holds the key to the area’s recovery.

When he travels to a burn site, such as the Cat or Stina fires on the North Rim, Kiesow tests the soil for various factors that will determine how the ecosystem recovers. Damage may range from low, which would likely not require any BAER intervention, to severe, which may require seeding or other projects to help to ground recover.

Kiesow performs water repellency tests by pouring a small amount of water on the soil and noting how it behaves. The more damaged the soil, the more it will repel the water, leading to potentially catastrophic erosion problems. If the soil absorbs some or all of the water, then the timeline for recovery is faster and it’s likely that at least some roots survived to help hold the soil in place and provide stabilizing ground cover once the rains arrive.

Macdonald said burn severity is usually determined by the intensity of the fire — whether it rushed across grasses or settled in for a long, heat-intensive fire on a downed log.

“”If a fire just really sits on an area and just cooks and cooks like a big log, for example, organic materials in the soil are consumed and you lose soil structure,” he said. “Then it tends to behave like beach sand, where your feet really sink in.”

Kiesow emphasized the window for deciding on and implementing BAER treatments is very short.

“We have to get those treatments implemented before the very first damaging event,” he said. “You’re really up against that clock because you know the rains are coming. We’re usually on the ground before the fire is even contained.”

“If those values aren’t out there, the BAER assessment is wrapped up pretty quickly,” he said.

If any of those criteria are present, Kiesow and his team will identify threats — mainly erosion or a path of potential debris flow from a flood — and makes recommendations to curtail those before the next storm. If the forest service signs off, a budget request is then submitted.

Some of the treatments can be costly — mulching or seeding, for instance — so Kiesow and other forest staff look at many factors to determine if it will be successful before requesting sought-after funds.