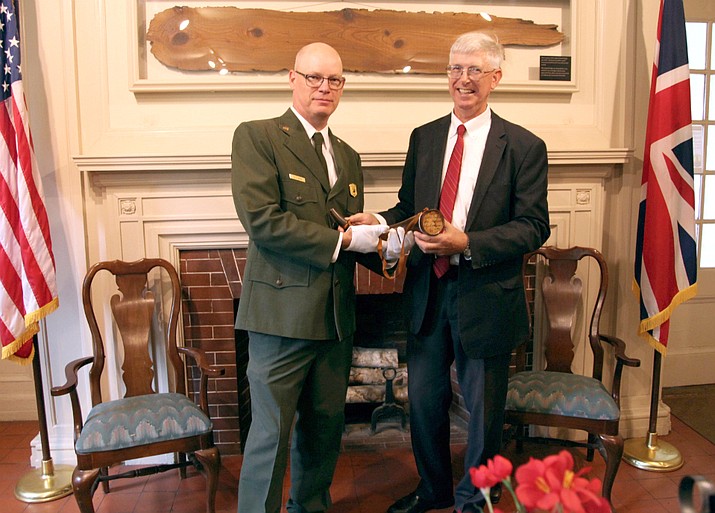 CONCORD, Mass. — A black powder horn used by Patriot and minuteman Willard Buttrick during the Revolutionary War in 1775 has been returned to Concord, Massachusetts.

On Sept. 15, members of the Buttrick family arrived at the Minute Man National Historical Park in Concord and signed over a powder horn, owned by Willard Buttrick who carried it with his rifle almost 250 years ago.

The powder horn returns to the location where it all began, North Bridge in Concord, just yards from the home he occupied. In front of the North Bridge Visitor Center, the former home of Stedman Buttrick, sits a foundation which was the home of Willard.

Marshall Buttrick, spokesperson for the Buttrick family and the official keeper of the powder horn, had spent many years, proudly showing the powder horn off and keeping it’s story a part of Buttrick lore.

When Buttrick and his siblings had to decide what the future of the powder horn would be, it was unanimous that the horn should be seen by the American public and the best way to do that would be to donate it to the park. Now, the personal story of the day will be displayed in the near future for all to understand and enjoy what the artifact can tell us about a patriot from almost 250 years ago.

On the morning of April 19, 1775, Buttrick, along with the Concord Militia, who turned out to defend their homes, families and ideals of self determination, they held dear. Like numerous citizen/soldiers of Concord and Middlesex County, they encountered the British army and fought with them at Concord’s North Bridge and later on the road to Boston. This was the start of the American Revolution.

During the 1875 Centennial celebration, artifacts connected with the day’s events were put on display for guests to witness. Then President Ulysses S. Grant had seen the powder horn, which was listed in a souvenir program issued for the occasion along with other witness artifacts to the days events.