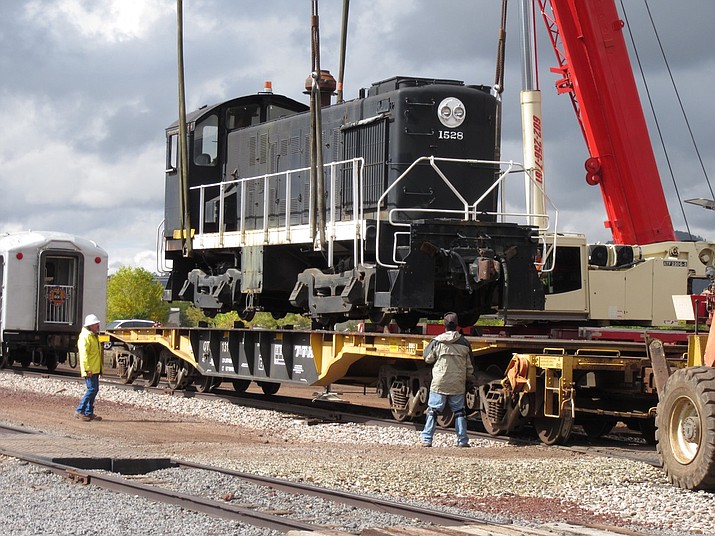 Engine No. 1528 arrives in Williams earlier this year. The engine will be part of exhibits on display at the Arizona State Railroad Museum in Williams. (Submitted photo)

WILLIAMS, Ariz. — The newest acquisition for the Arizona State Railroad Museum (ASRM) arrived in Williams recently, completing a journey that began in 1952.

Engine No. 1528 arrives in Williams earlier this year. (Submitted photo)

Built by Alco, No. 1528 was shipped to the Santa Fe Railway in Phoenix where it served in the yards there for more than 20 years. When declared surplus by the railroad, it was sold to Continental Grain in Gilman, Illinois. This company was later sold to Cargill Inc. and No. 1528 continued to work at their large grain operation in Gilman until acquired by the railroad museum in 2017.

In August, the museum began the process to return No. 1528 to her home in Arizona. This was a two month long odyssey that took it to Chicago, through Illinois, Missouri, Kansas, Texas, New Mexico and finally to Arizona on three different railroads. Once in Williams the Grand Canyon Railway assisted by moving it to a track where Southwest Industrial Rigging’s cranes accomplished the offload and once again set the car on Arizona rails.

No. 1528 will be restored to her original 1952 Santa Fe livery and serve as a backdrop for the people stories of yard service in Phoenix.