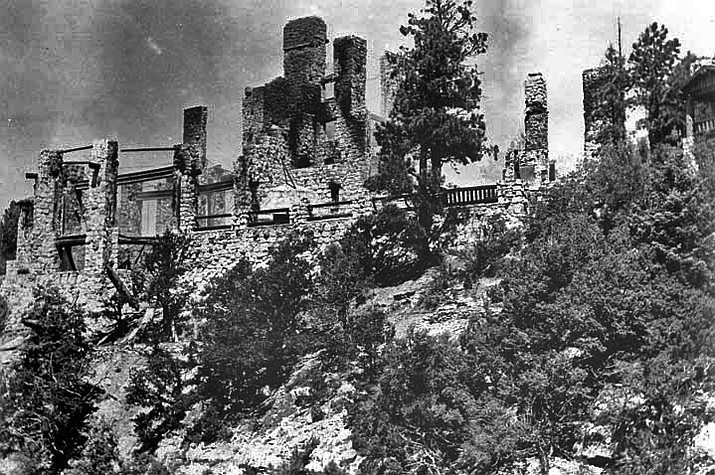 The original Grand Canyon Lodge was completed on the North Rim in 1928. It burned after a kitchen fire in September 1932. (Photo/NPS)

NORTH RIM — Like many of the world’s most beautiful places, Grand Canyon’s history is filled with life, prosperity, a billion breaths caught short and, inevitably, death.

For every tragedy reported since the mid-1800s, there are most certainly a few that were not – including the legend of a young woman, so stricken with grief at the loss of a husband and son that she ended her life in a historic lodge on the North Rim.

Although not documented like so many lost or missing in one of America’s most wild places, the most prominent local stories suggest the young woman may have traveled to the North Rim sometime between 1928, when the lodge was built, and 1932, when an early morning kitchen fire burned it to the ground.

While she waited at the lodge, her husband and son went for a hike along the Transept Trail, a three-and-a-half mile trail that runs between the lodge and the North Rim campground. While they were out hiking, the weather took a sudden turn for the worse. Caught in the storm, the two lost their footing and fell to their deaths. When they didn’t return, the young woman, in all accounts dressed in a white dress with blue flowers and scarf on her head, took to the trail herself, searching for her family. When she was unable to find them, she returned to her room in the lodge and ended her own life.

In her book “Haunted Hikes: Spine-Tingling Tales and Trails from North America’s National Parks,” author Andrea Lankford, writes that Ranger Stu Fritts said though there is little evidence, the story of the wailing woman is compelling, and many credible witnesses her reported sightings. many hikers and even some seasonal park rangers have reported seeing the young woman’s apparition, either wandering the Transept Trail or in the lodge, which was rebuilt in 1936 in the footprint of the old building. Even some who have not seen her have reported hearing an eerily loud weeping or wailing sound coming from areas around the trail, at the lodge and at the campground.

Creepier still, a number of witnesses reported seeing the woman’s face in the flames as the lodge burned in 1932.

The woman also reportedly takes issue with open doors at the current Grand Canyon Lodge, with former employees and caretakers saying that she will not allow a certain door to remain open. Whenever she finds it open, she reportedly slams it shut.

Others believe the North Rim’s wailing woman could be La Llorona, a pitiful figure in Latin American folklore who committed a heinous crime, only to take her own life in remorse moments later.

According to legends, La Llorona’s name was Maria. She was a beautiful woman with flowing black hair who married into a wealthy family and had twins, a boy and a girl. As Maria was walking with her children one day, she saw her husband with a younger woman. She flew into a rage and pushed both of her children into the river, realizing only moments later what she had done. She jumped into the river after them, but legends say that she may not enter the afterlife until she reconciles with them, leading her to wander forever in search of her lost children.

La Llorona, Spanish for “weeping woman” wails in the night as she searches, and most legends associate her cries with misfortune or even death, much like the Irish banshee. In Guatemala, La Llorona is a tricky spirit — when her wails sound very close, she is actually far away, and when they sound quite distant, she is reportedly near, waiting to cause harm to those who don’t immediately flee. Some of the darker stories say La Llorona steals other children who resemble her own to beg forgiveness, but throws them into the river instead when they cannot give it. The tale is often told to children in Latin American countries to prevent them from venturing out after dark.

No tales, however, have associated the North Rim’s wailing woman with any harm or malevolence.

The Transept Trail is a 3.4 mile out-and-back rim trail leading from the Grand Canyon Lodge to the North Rim Campground. It is child and dog-friendly (leashed only — don’t forget to clean up). The North Rim is considered closed for the season Nov. 1, although day-use hiking is still permitted and camping is allowed with a valid backcountry permit. Visitors should come prepared with food and water. Nearby, year-round lodging, food services and fuel is located 45 miles north of the North Rim at Jacob Lake.

Additional lodging and guest services are available in Fredonia, Arizona and Kanab, Utah. The North Rim Lodge Gift Shop will remain open through Nov. 30 offering limited snacks and souvenirs. As of Dec. 1, the road to the North Rim will close, with vehicle access becoming available again May 15, 2019.