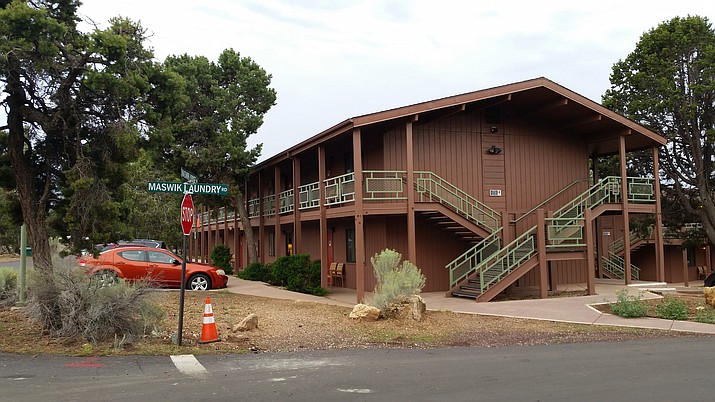 Built in 1971, guest room buildings at Maswik South, located behind the lodge, are scheduled to be demolished and replaced beginning in January 2019. (Erin Ford/WGCN)

Maswik South is located in Grand Canyon Village on the South Rim. The lodging complex consists of six prefabricated, motel-style lodging buildings that provide 90 guest rooms. The buildings were constructed in 1971 and have exceeded their expected useful life of 40 years. Other existing infrastructure at Maswik South, such as sidewalks and roads, is also aging, in poor condition, or not compliant with current laws, codes and regulations, including the Americans with Disabilities Act of 1990. Additionally, the configuration of the Maswik South site contributes to poor traffic circulation and conflicts between pedestrians and vehicles.

To correct these issues, the NPS is proposing to demolish the existing Maswik South buildings and construct four new buildings within the existing site footprint. The new buildings would provide 120 rooms, including some rooms with kitchenettes. The proposal also includes reconfiguring the site; improving aging infrastructure, such as roads, parking, and sidewalks; and improving pedestrian and vehicular circulation to address safety concerns. Additionally, the NPS is proposing to construct up to three new sections of road (approximately 0.7 miles total) in the vicinity of Maswik South to provide an alternate route from Grand Canyon Village to Rowe Well Road and reduce traffic at Maswik South.

Xanterra South Rim, LLC currently operates Maswik South under a concessions contract with the NPS and would complete the Maswik South rebuild under the terms of that contract.

The Maswik South Rebuild EA is available on the NPS Planning, Environment and Public Comment (PEPC) website at http://parkplanning.nps.gov/MaswikSouth. Public comments on the EA will be accepted for 30 days (closing Nov. 25, 2018). During this time, any individual or group can submit comments electronically at the PEPC website, in person at the public review meeting, or via mail to Superintendent, Grand Canyon National Park, Attn: Maswik South EA, PO Box 129, Grand Canyon, AZ 86023. The preferred method for submitting comments is on the PEPC website listed above.

Interested parties can participate a public review meeting from 4 to 6 p.m. Nov. 8 at Shrine of the Ages auditorium. Following the public review period, the NPS will consider all feedback and make a final decision as to which alternative (or variation of an alternative) will be implemented.

Located at the southeast edge of Grand Canyon National Park, Desert View is at the east entrance to the park. Desert View provides many visitors with their first introduction and orientation to some of the park’s most significant resources, including the Desert View Watchtower and its surrounding historic district. The area also offers spectacular views of the Painted Desert and the Little Colorado River Gorge.

Given the significance of the site, its infrastructure, and proximity to neighboring tribal lands, the NPS is proposing to transform Desert View from a traditional scenic overlook and visitor services area into an Inter-tribal Cultural Heritage Site. This will provide opportunities for first-voice cultural interpretation from associated American Indian Tribes-including cultural demonstrations-and enhance visitor orientation to the cultural significance of the site and park while helping inform visitors about tourism opportunities on surrounding tribal lands.

To accomplish these goals, the NPS is proposing modifications to existing infrastructure, relocation of underutilized facilities, and potential new construction within the existing developed footprint at Desert View. Additional information, including a newsletter on the specifics of the proposed action is available on the NPS Planning, Environment and Public Comment (PEPC) website at http://parkplanning.nps.gov/DesertViewICHS.

Interested parties can participate in a public review meeting from 6 to 8 p.m. Nov. 7 at DoubleTree Hotel, 1175 W. Route 66, Flagstaff, Arizona. Information will also be available at the Nov. 8 meeting regarding the Maswik South rebuild. A webinar is scheduled for Nov. 8 from 12:30 pm to 1:30 pm. More information about the webinar can be found at http://parkplanning.nps.gov/DesertViewICHS.

Public comments on the proposed action will be accepted for 30 days (closing Nov. 24). During this time, any individual or group can submit scoping comments electronically at the PEPC website, in person at public review meetings, or via mail. Following the public review period, the NPS will consider all feedback and make a final decision as to which alternative (or variation of an alternative) will be implemented. This final decision document, a Finding of No Significant Impact (FONSI), will be reviewed by the superintendent of Grand Canyon National Park and, if appropriate, approved by the NPS Intermountain Regional Director.

The NPS is working cooperatively with a number of partners, including representatives from the Kaibab Band of Paiute Indians, Havasupai, Hopi, Hualapai, Navajo, Zuni, and Yavapai-Apache tribes, the Grand Canyon Association, the American Indian Alaska Native Tourism Association (AIANTA), the Bureau of Indian Affairs and park concessioners.