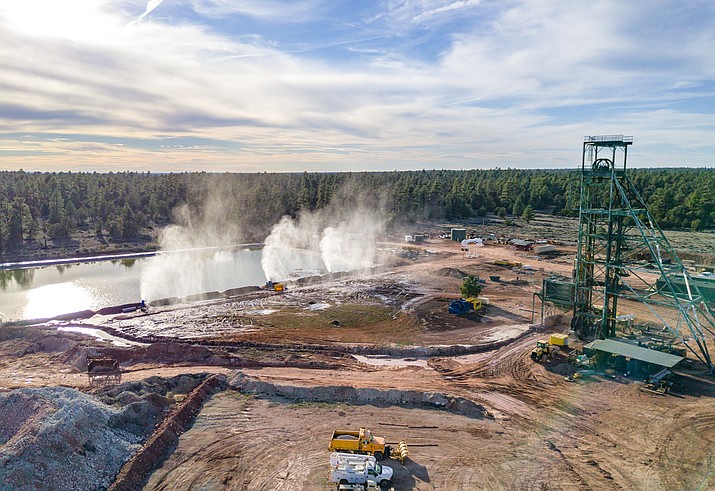 Canyon Mine uses water cannons to evaporate water from its holding pond near the mine shaft. (Blake McCord/Grand Canyon Trust)

WASHINGTON — A federal appeals court said Oct. 25 that the Havasupai tribe and environmental advocates can challenge an existing uranium mine on land near the Grand Canyon where mining was recently banned.

The decision by a three-judge panel of the 9th U.S. Circuit Court of Appeals is a partial reversal of its own December decision that said the Canyon Mine, approved in 1988, was grandfathered in and could not now be challenged.

“This decision is a victory for public lands everywhere,” said Amber Reimondo, energy program director for the Grand Canyon Trust, one of the advocacy groups challenging the mine. “It recognizes that those of us who want to protect public lands can go to court to help put teeth into safeguards like the Grand Canyon mining ban.”

But a spokesman for mine owner Energy Fuels Resources said the company is committed to continuing the fight to open the mine, which he said poses no threat to the environment.

“It’s a minor setback, but I don’t think it’s going to impact anything we’re doing up there. So we’ll see what happens,” said Curtis Moore, the spokesman.

The ruling is the latest in a years-long fight that began in 1988, when the Forest Service approved plans to build and operate the mine around Red Butte, just miles from the Grand Canyon and the Havasupai lands. Construction began on Canyon Mine but was put on hold in 1992 when the market for uranium faltered.

The mine was still shuttered in 2012 when then-Interior Secretary Ken Salazar imposed a 20-year moratorium on new mining claims — a “mineral withdrawal” — on more than 1 million acres of public lands around the Grand Canyon.

A few months before the ban took effect, Energy Fuels Resources told the Forest Service that it planned to reopen Canyon Mine. After a review, the Forest Service determined that the company had “valid existing rights that were established prior to the mineral withdrawal.”

Even though it determined that the mine did not need new environmental or historic site approvals to operate, the Forest Service contacted the tribe to negotiate possible changes to protect Red Butte, which was declared a historic place in 2010.

The court said those negotiations continued until 2013, when the Havasupai sued, along with the Grand Canyon Trust, the Center for Biological Diversity and the Sierra Club. The suit demanded new reviews of the mine under the National Environmental Policy Act, the National Historical Preservation Act and the Federal Land Policy and Management Act.

“There is potential for contaminating the groundwater,” said Sandy Bahr, director of the Sierra Club’s Grand Canyon chapter. “That’s part of the reason why the Havasupai tribe has challenged this mine — in fact, has been challenging this mine since the 1980s.”

Taylor McKinnon of the Center for Biological Diversity said that neither the miners nor the government “can ensure protection against permanently damaging the Grand Canyon’s aquifers and springs.”

“It will not be disruptive to the environment,” he said of the mine. “There’s a 40-year history of mining these types of deposits in northern Arizona, where there’s been no adverse environmental impact. Their fears are unfounded.”

The suit also said the Havasupai consider Red Butte a sacred place, and Bahr said the government is “ignoring the concerns of the Havasupai and a number of other tribal nations regarding what the impact of this mine is or could be.”

A federal district court last year sided with the government, and that ruling was upheld by the 9th Circuit in December. But the court revisited its ruling and said Oct. 23 that while the mine approval could not be challenged under the environmental or historical laws, there could be a challenge under the Federal Land Policy Management Act.

“The original three judges who reviewed this took another look at it and said, ‘We changed our mind at one of these points, and we’re going to send it back to the district court so we can get a ruling at that level,'” said Roger Clark, director of the Grand Canyon Trust’s Grand Canyon Program.

The court ordered the case back to district court to reconsider the challenge on those grounds.

“Theoretically, this mine that’s already been developed … if it is subject to the Mineral Withdrawal, nothing could be mined out of there until after the moratorium is lifted in 2032,” Clark said.

Both sides agree that there is still a long legal battle ahead. But Moore said the mining company is confident that it will emerge successful.

“We’re unsure what exactly our next steps will be, but presuming that we do have to go back to the district court and argue that issue, we’re pretty confident that we’ll prevail on that issue,” he said.