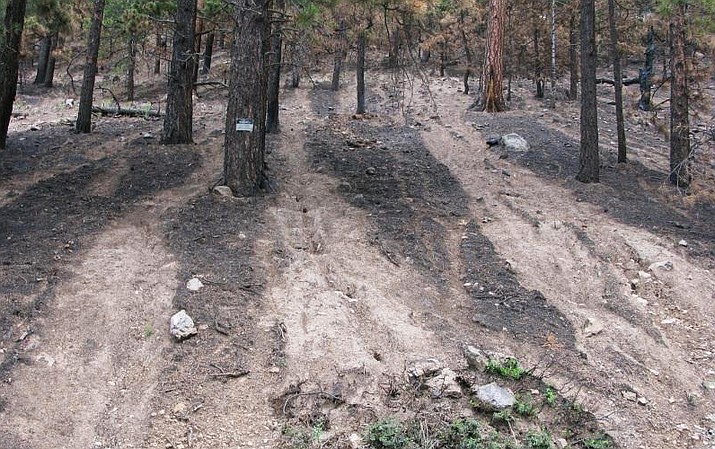 Examples of hillslope erosion along FR146 in Coconino County. The photo was taken after the Schultz Fire and shows rilling through ash. (Photo/Arizona Geological Survey)

On the Kaibab National Forest, fire managers aren’t always locked in a battle with encroaching flames — they’re out to beat the elements. In a northern Arizona landscape that sees fire and rain flare simultaneously during the three-month monsoon season, the aftermath of a fire can be like a tricky chess match.

Erosion is the name of the game, and controlling it is crucial, both to the landscape and the communities down-mountain.

According to the University of Arizona, the potential for severe erosion often exists after a wildfire because the hot-burning fire can destroy all of the roots and ground cover which stabilize the soil and slow water down, allowing it to percolate into the soil.

Kit Macdonald, soils and watershed program for the Kaibab and Coconino National Forests, said soil isn’t just made up of the dark brown stuff we see on the surface.

“If you pick it up, you’ll notice that there are all kinds of things making up that soil – roots, little grasses, organic material,” he said.

When that burns off, the soil is no longer stable, and when heavy precipitation hits the area, it heads straight downhill.

Micah Kiesow, soil scientist for the Kaibab National Forest, said the steeper the slope, the more erosion can become a serious problem.

“If you’re on a flatter slope, it’s less likely you’re going to lose a lot of soil, though it’s still possible” he said. “It’s on those steeper slopes when you lose your cover, that’s what we’re really paying a lot of attention to.”

Communities like Flagstaff have a close understanding of the disaster erosion can cause – flooding after the Shultz Fire in 2014 took the life of a young community member as the waters rushed headlong down slopes with no organic matter left to deter it.

Even the community of Payson, which sits in Arizona’s high country near the Tonto National Forest, also experienced the devastating impacts of unimpeded water – nine of 14 family members were killed when a “40-foot black wave” of water debris and mud came rushing down a sleepy mountain stream, spurred by storms they couldn’t even see.

That debris flow is just one of the most dangerous aspects of flash floods caused by flame-scorched ground. Macdonald said the forest works with surrounding communities to develop plans for mitigating food damage. For communities in the mountains, like Williams or Flagstaff, for example, the forest service works with the cities and other agencies to install barriers to keep debris flows out of towns. He said other measures might also include removing culverts if they are likely to burst or channel the water into a more destructive force. New culverts could also be installed or forest roads temporarily diverted away from danger zones.

“Another measure we can take is a hard closure, where we actually place barricades across the roads and close the gates,” he said.

“The more fire that a particular area sees, the less likely that we’re going to have those really negative outcomes,” she said. “If you look at our Tusayan Ranger District as an example, there’s been so much historic fire across that area from us managing wildfires and doing prescribed burns. When fires get started now, we tend to not see the negative outcomes because a lot of the fuel has been cleared out and it’s not burning at such a high severity. It’s moving across the landscape more naturally as it would have historically.”

See What happens after a fire? for part I of a Fostering a fire-adapted forest.