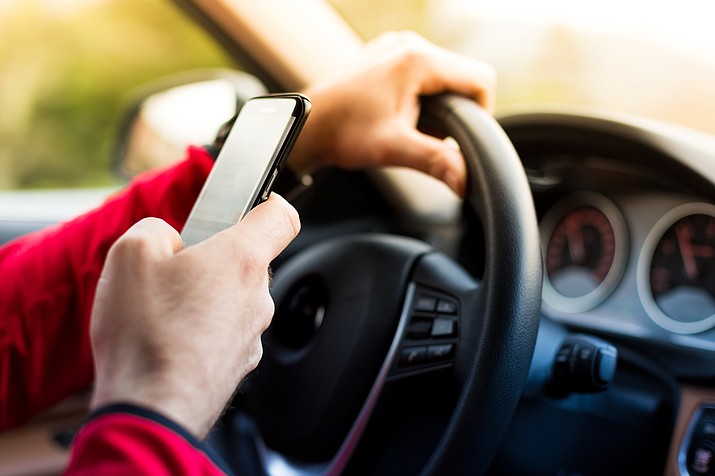 Under a new law, teens can be fined for texting while driving within the first six months of gaining their license. (Stock photo)

ASH FORK, Ariz. — The heartrending stories of family members and victims who continue to suffer after distracted driving behavior caused injury or death to a loved one convinced the Yavapai County Board of Supervisors to unanimously approve a new ordinance Oct. 3, banning the use of cell phones while driving.

The Hall family drove up from Peoria to talk about the late Tom Hall, husband, dad, and grandfather, who died when a driver took her eyes off the road to reach for a cellphone and hit him.

“What you will do today will affect everybody, positively,” Jon Hall said. He said he was dismayed that the driver who rear-ended his father, 74, who was driving a moped on Highway 69 in Prescott Valley, received only a civil traffic violation and paid $188 as a consequence.

The ordinance, which encompasses the unincorporated areas of Yavapai County, goes into effect 30 days after the board’s approval.

The ordinance states, “A person shall not drive a motor vehicle while holding in his or her hand, typing on or otherwise manually operating a portable communications device.”

Seven exemptions include an allowance for hands-free mobile devices; use while pulled off the side of the road with the vehicle in park; to communicate an emergency to law enforcement or fire agencies, ambulance, or physician’s office; and on private property. Emergency vehicle drivers may use devices in the performance of official duties.

A violation of Ordinance 2018-2 may result in a civil traffic violation that carries a $100 penalty, plus other assessments and surcharges. If the motorist is involved in a motor vehicle crash, a civil penalty of $250 could result.

Yavapai County is now the third county, joining Coconino and Pima, to approve an ordinance banning cell phone use while driving. State leaders have tried to convince the state legislature to create a state-wide band, but so far have been unsuccessful.

Arizona and Montana are the only states that don’t have a ban on texting while driving, according to the National Conference of State Legislatures.