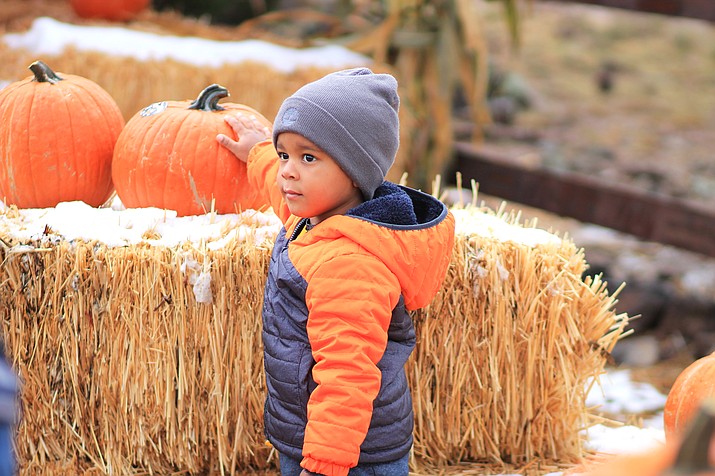 WILLIAMS, Ariz. — A couple of inches of snow failed to deter young eager railway riders Sunday morning, as they embarked on the Grand Canyon Railway’s Pumpkin Patch train in search of the perfect pumpkin.

Riders were greeted with close to 2 inches of snow as an early season snow storm rolled through northern Arizona on just the second day of the running of the Pumpkin Patch train.

Showcasing the historic Grand Canyon Railway, a small town atmosphere and a short tour of the dense ponderosa pine forests, passengers were treated to a ride to the train’s pumpkin patch where young riders selected their favorite pumpkin to bring back home.

The early season storm surprised many visitors and residents who went to sleep Saturday night to pattering of rain and woke Sunday morning to a blanket of white.

Several children donned their costumes early to take the fairy-tale ride through the forest to the private pumpkin patch, accessible only by train.

The Pumpkin Patch Train has three runs each Saturday and Sunday through October, departing from the Grand Canyon Railway train station. Tickets cost $27 for an adult, $22 for children under 15 years old and infants under two are free.

Included in the price is a train ride from the Williams Depot to the pumpkin patch as well as one pumpkin per child.

Riders disembark at the pumpkin patch and have 30 to 45 minutes to pick out their favorite pumpkin. There is also a walk-through haunted train car and a maze at the platform. At the end of the train ride there is an opportunity to decorate pumpkins.

The Grand Canyon Railway offers a number of other train experiences including the daily Williams to Grand Canyon route, Steam Train Saturdays on the first Saturday of each month March through October, and the Polar Express all of November, December and the first week of January. More information can be found at thetrain.com.

The railway to the Grand Canyon was built in 1901 by the Atchison, Topeka & Santa Fe Railway giving tourists an alternate to stagecoach travel from Flagstaff. The railway carried tourists to the rim where they stayed in tent camps until the El Tovar and other lodges were built in the early 1900s.

Ranchers and loggers contracted with the railway to transport stock and supplies including water were brought to the Grand Canyon on the train.

The railway continued to be the main passenger transport to the canyon through the 1950s but stopped service in 1968 when automobile travel became more popular.

In 1989, Max and Thelma Biegert purchased the train and brought the rail line back to life by restoring the tracks and historic depots and both ends of the line, bringing railway travel back to Williams and the Grand Canyon.