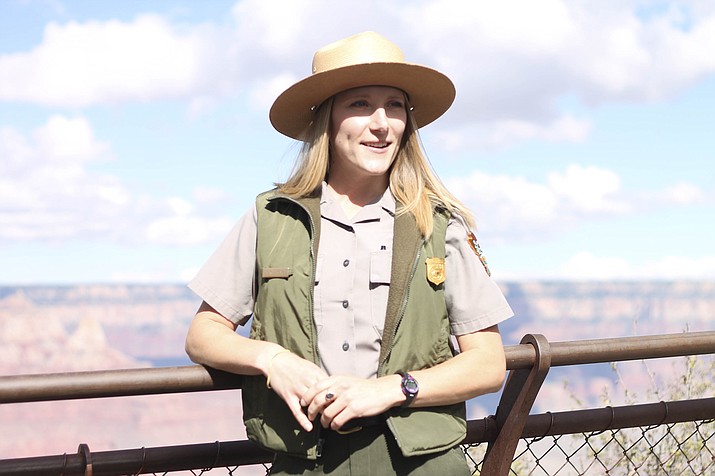 Ranger Sarah Acomb shares information about Grand Canyon with visitors from all over the world. (Loretta Yerian/WGCN)

GRAND CANYON, Ariz. — Every day Grand Canyon Park Ranger Sarah Acomb gets to see the Grand Canyon through the eyes of visitors from around the world.

As an interpretive ranger, Acomb’s job is to introduce, familiarize and navigate people around the park.

“(Grand Canyon) is one of those places people come to because they just have to see it and in my job I get to tell them, ‘yeah, you just have to see it but there’s so much more to it.’ You get to connect people to the park in that way and so they want to care about it in the future,” Acomb said.

This is Acomb’s third season working at Grand Canyon and fifth year working as a seasonal ranger with the National Park Service (NPS).

Her focus has been in environmental education where she helps coordinate field trip programs and gives educational talks.

“That means generally that you do programs for the general public,” she said.

These programs provide a slew of knowledge on a variety of subjects ranging from ecology and geology to cultural history. The programs are scheduled by NPS and occur throughout the park. They are free and open to the public.

“That’s the main interpretation part of the job — interpreting not into a different language but interpreting the meaning of the park,” she said. “So we talk about geology and how Grand Canyon formed but then there’s that so what factor and how does that apply back to the person who is coming to visit.”

One of Acomb’s favorite parts of the job is helping visitors understand the role of national parks and how they relate directly back to each individual.

Acomb likes to instill ownership of the parks with her audiences.

“If the people own the government and the park service is part of the government then who owns the parks? Who owns Grand Canyon?” she asks during her programs.

She believes teaching the public that national parks belong to them helps visitors bestow some level of ownership and can help visitors become better stewards of the park.

Acomb said visitors often ask if she gets tired of the view and she is very certain in her response.

“No, absolutely not,” she said. “I live in a travel destination. This is one of the places that people come to see out of their hundred places to visit and I get to explore it more in-depth.”

Acomb has spent the last several years getting to know not only Grand Canyon but also the west coast.

Originally from a small town an hour away from Cincinnati, Ohio, Acomb can relate to many visitors as they compare and contrast the western landscape to more familiar surroundings.

“I loved growing up in Ohio and all the seasons but the humidity in the mid-west in the summer time — I don’t miss the humidity. It’s nice too because we get so much more sun around here. Even when it’s really cold — clear blue skies,” Acomb said.

Those crystal clear blue skies were the first thing Acomb noticed when she first came to the west coast.

“It’s so much deeper than back where I’m from … everything is really different landscape wise, but look at the sky! It’s like royal blue not baby blanket blue — it’s vibrant,” she said. “There’s more sky. I know Montana claims ‘big sky country’ but goodness, the desert Southwest can claim it too.”

In addition to a diverse landscape and skyscape Acomb said the culture and lifestyle of the west is very different than in Ohio.

“It is just very different. Everything that I experience is very engaging and enthralling,” she said.

As the season draws to a close Acomb plans to stay on in Arizona where she plans to work with Grand Canyon Association (GCA), the official non-profit partner of GCNP through the winter.

Acomb is currently working with Canyon Field School, primarily a summer camp program that is put on through a partnership between GCA and NPS.

“It’s cool to see that program move forward,” she said. “I have career goals within the NPS of wanting to work for interpretation or education and both of those are just awesome jobs… but specifically that project just speaks to me. What kid doesn’t want to come to Grand Canyon and have a summer camp program or come on a field trip with their class?”

She plans to continue her work with that project through the winter and plans to return as a seasonal ranger next spring.

Interpreting the Canyon through the eyes of a ranger
Interpretation from Desert View, a closer look at a ranger's life along the Watchtower
Better late than never, a North Rim ranger finds her true calling in life
Faces at the Grand Canyon: Interpretive Park Guide Kristi Rugg
History comes alive during "Echoes from the Canyon" production
Event Calendar