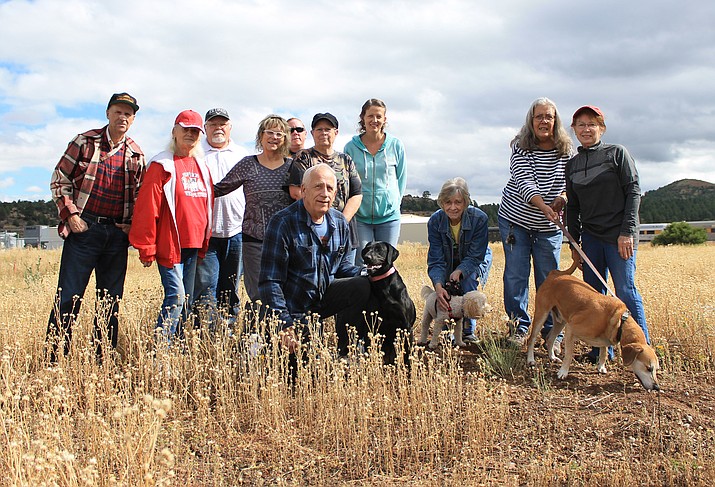 Members of SAVE Meant-To-Rescue gather at the location of the future animal shelter in Williams. The group continues to work toward raising the funds necessary to develop the land leased by the city of Williams. Pictured above: Ken Malpas, Cathy Hart, Harry Hart, Angela Price, Pat Anthony, Marie Cavaletto, Claire Grace, Diane Mansfield, Roy Mansfield and Sally Burcham. (Wendy Howell/WGCN)

WILLIAMS, Ariz. —Although it has been 10 years since the idea of building an animal shelter came before the city, construction has yet to begin on a facility to help house homeless pets in Williams.

The dedicated group of volunteers has raised nearly $250,000, according to treasurer Diane Mansfield, but site prep work on the city leased property has prevented the group from breaking ground.

“The price tag to develop the city land is nearly $100,000 for us and that is the hurdle we are working out,” said Robynn Smith-Eckel, president of SAVE Meant-to-Rescue.

According to Smith-Eckel, the concept for an animal shelter was presented to then city manager Joe Duffy in 2008.

Smith-Eckel said Duffy made an agreement with her that if a committee was formed and money was raised, the city would donate buildable land for the project. A site on Frank Way near the rodeo ground was selected as a lease option.

In 2014, city officials withdrew the property near the rodeo grounds and suggested a parcel on Ellen Way near the wastewater plant just north of I-40 off of Airport Road.

In June 2015, the Williams City Council approved a 30-year lease on the Ellen Way property for $1 per year. SAVE-MTR was responsible for the costs of building design, construction review and permit fees, construction administration and utility extensions. SAVE-MTR was also required to use licensed contractors for all construction activity.

At that time, SAVE-MTR had raised $150,000 and was ready to begin building on the site.

In June 2016, SAVE-MTR discovered that preparing the Ellen Way property for construction was going to cost much more than anticipated.

Smith-Eckel spoke to the city council at a July 2016 meeting and said exorbitant site fees were keeping the group from breaking ground.

She said excavators evaluated the property and determined it was mostly rock and would require heavy equipment for the site prep work. The property is also located farther form utilities than the group anticipated.

At the July 2016 city council meeting, councilman Don Dent said the city would need to dig a few hundred feet to get a water line in, and once that was done and fill dirt was brought in the group should be ready to build.

“The city was going to develop the property to make it as buildable as the rodeo ground property,” Smith-Eckel said, “but after (former city manager) Skylor Miller left, the project stalled out as we try to raise more money to develop the land we leased from the city.”

Bill Tocci, a member of SAVE-MTR, is taking the lead on coordinating construction with a building contractor and the city.

Tocci said he has been speaking with the original architect, Williams Building Inspector Tim Pettit and a commercial building contractor to get final numbers on construction for the site.

“We are looking at the possibility of having to do it in a couple of steps,” Tocci said. “We would first build a structure that is just an office with a few runs for dogs. Then as we advance we can expand and complete the plans. But I have to get those plans to the city and get the approval for that.”

Tocci said he doesn’t have formal construction costs yet, but said a commercial builder in Flagstaff said the site work is roughly $100,000.

“They are talking about needing to move 550,000 cubic yards of dirt to prepare the site,” Tocci said.

“If we get the city’s authority, we would like to do the construction in two phases. The office as phase one and then the back half where more dogs can be kept as phase two,” he said. “We would start with just a shell it looks like.”