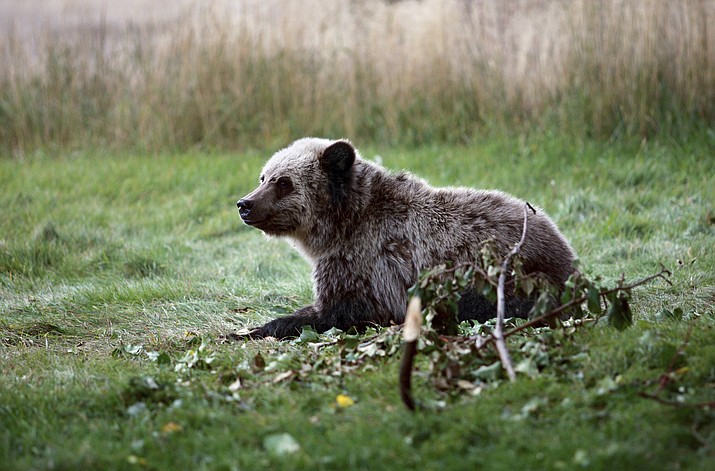 In this Sept. 25, 2013 photo, a grizzly bear cub rests near a cabin a few miles from the north entrance to Yellowstone National Park in Gardiner, Mont. A court ruling Sept. 24, that blocked grizzly bear hunts in the U.S. West carries far wider political implications amid a push by Congress for sweeping changes to how imperiled species are managed. (Alan Rogers/The Casper Star-Tribune via AP, File)

Republicans began with a morning vote in the House Natural Resource Committee to strip protections from gray wolves across the contiguous U.S.

Courts restored safeguards for wolves in the Great Lakes region in 2014, frustrating states that had been allowing hunts to control wolf populations.

Later Sept. 26, lawmakers took up changes to the endangered species law itself, with a suite of bills that supporters said would make the law work better and eliminate obstacles to economic progress.

Critics said the measures weaken the law by shifting power to state and local governments and away from federal scientists.

Momentum for change to the 1973 act has been building since President Donald Trump took office last year. Adding impetus to the effort was a court ruling Sept. 24 in Montana that restored protections for grizzly bears in and around Yellowstone National Park, putting on hold grizzly hunts that had been planned in Wyoming and Idaho.

"This ruling in Montana to me is the prime example of why Congress should modernize the Endangered Species Act," said Senate Environment and Public Works Committee Chairman John Barrasso, a Wyoming Republican. "The grizzly bear has been fully recovered for 10 years. Even the Obama administration said so."

Barrasso said he prefers broad changes to the act rather than legislation on individual species. He has drafted legislation that includes a provision to block courts from intervening in decisions to lift protections for five years after those decisions are made. That would have prevented the grizzly ruling if it had been in place. 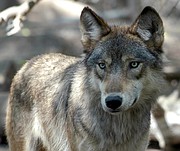 In this July 16, 2004, file photo, is a gray wolf at the Wildlife Science Center in Forest Lake, Minnesota. A court ruling that blocked grizzly bear hunts in the Northern Rockies is galvanizing Republicans eager to overhaul the Endangered Species Act, but Congress is poised first to deal with a separate animal — gray wolves. (AP Photo/Dawn Villella, File)

Other Republican proposals would speed up the process of deciding if species need protections, provide conservation incentives to landowners and give state, local and tribal governments more power in species decisions.

The hunts in Wyoming and Idaho would have been the first allowing members of the public with licenses to shoot bears in the contiguous U.S. since the 1990s. Alaska has had public grizzly bear hunting during that period.

Whether the GOP proposals ultimately succeed could hinge on who controls Congress next year. Barrasso said he does not expect significant changes to the act until after the November midterm election.

The ranking Democrat on the House Natural Resources Committee, Arizona Rep. Raul Grijalva said the Republican proposals comprised a "wish list" for industries that see the law as a barrier to development.

He said blocking lawsuits from wildlife advocates who would seek to restore protections could set a dangerous precedent, by making the government unaccountable in court for its actions.

Both species were nearly exterminated in the early 20th century but have rebounded in some areas since passage of the endangered act, which is meant to shield plants and animals from potential extinction.

Wolves in the Northern Rockies are not federally-protected and are subject to hunting.

The judge faulted federal wildlife officials for not giving enough consideration to bear populations that continue to struggle elsewhere in the Northern Rockies.

A spokeswoman for Cheney, Maddy Weast, said the lawmaker was looking for the best way to advance the measure. The grizzly hunts planned in Wyoming and Idaho this fall would have allowed up to 23 of the animals to be killed.

Hunters said that could have helped address rising numbers of grizzly-human conflicts. Bears frequently attack livestock and occasionally people, including a Wyoming hunting guide killed by a pair of grizzlies earlier this month outside Grand Teton National Park.

Defenders of Wildlife attorney Jason Rylander acknowledged grizzly bears and wolves have become a flashpoint for dispute, but said politics should not decide a species' fate.

"In both the cases of grizzly bears and wolves, work on recovering them in the Lower 48 is not complete," Rylander said. "We have to decide if we're willing as a nation to recover them beyond the pockets where they have been resurgent."

Jonathan Wood with the conservative Pacific Legal Foundation, said Monday's court ruling on grizzlies amplified "the political appeal" for changes to the law that he said were needed.

"The Obama administration had no more luck getting the gray wolf or grizzly delisted (from federal protections) than the Bush administration did. This is a consistent problem," Wood said.

Under Trump, the U.S. Interior and Commerce departments in July proposed administrative changes to the species law that would end automatic protections for threatened plants and animals and set limits on designating habitat as crucial to recovery.

Attorneys general from 10 states on Sept. 25 demanded that the administration abandon the proposals in a letter to Interior Secretary Ryan Zinke and Commerce Secretary Wilbur Ross.