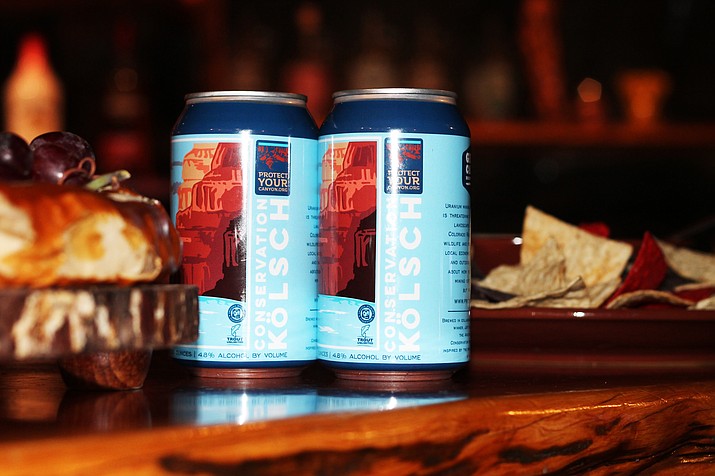 GRAND CANYON, Ariz. — The topic of uranium mining in northern Arizona is sensitive, often pitting Native tribes, conservationists and local residents against business and industry interests in what can become intense conversations.

But a local craft brewery and a coalition of sportmen’s groups are looking to change that narrative, inviting the public across Arizona to stop in, have a beer and talk about the issue in a more casual environment. Trout Unlimited, the Arizona Wildlife Federation and Grand Canyon Brewery teamed up to roll out Conservation Kolsch Sept. 28 in Williams.

While the world of outdoor sportsmen is home to an extremely diverse community, Nathan Rees, coordinator for Sportmen’s Conservation Project and Trout Unlimited, said the issue of uranium mining is one that has united that community.

“We all rally together on certain issues and support each other,” Rees said. “On issues like this, we found the need to branch out and try to reach a different audience, because when we talked about it (uranium mining) with our members, it’s kind of like preaching to the choir.”

Rees said he saw the opportunity to partner with Grand Canyon Brewery as a way to change the conversation, using a different tactic than the group has used in the past. He said the goal was not to just keep talking to members, but to raise awareness among other groups and rally the troops.

“Grand Canyon Brewery, a local, craft brewery, is a perfect fit,” he said. “There’s nothing more bipartisan than beer.”

Since 2012, regional conservation groups, the Havasupai Tribe, the U.S. Forest Service and mining industry groups have been involved in a handful of lawsuits aimed at both rescinding the ban and shutting down Canyon Mine, which is currently the only operating uranium mine on the South Rim.

On Oct. 1 the Supreme Court denied the mining industry’s petition for a writ of certiorari asking the court to revisit the December 2017 decision in the 9th Circuit upholding the 2012 Northern Arizona Mineral Withdrawal that bans new mining claims on about 1 million acres of public lands around the Grand Canyon. This decision means the 20-year ban on new mining claims put in place in 2012 will remain and marks the end of the legal battle challenging the withdrawal, according to Grand Canyon Trust (GCT).

While this marks the end of the legal challenge, the administration could still lift the ban administratively — uranium has been listed as a critical mineral, so access to it could be enhanced for reasons of national security. According to GCT, the Department of Commerce is weighing an industry petition for uranium quotas, which could make uranium deposits around the Grand Canyon more difficult to resist.

Conservation Kolsch, Rees said, is about maintaining public awareness of the issue, especially since the Department of Commerce is scheduled to release a report on mining and transporting uranium in November. After that, the group plans to host pint nights around the state to keep the conversation going.

“We produced a really great film to give a sportsman’s view of uranium mining around the Grand Canyon, so we’re going to host pint nights where we show the film and invite everyone out for a beer,” he said. “It’s a more casual opportunity to engage people.”