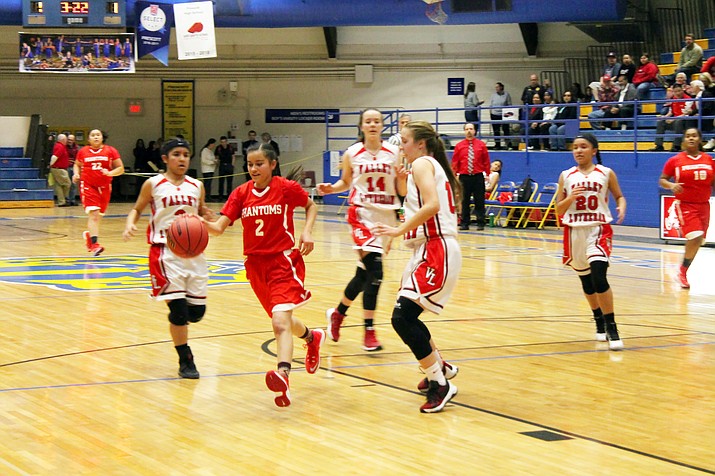 Cayli Miles dribbles through three Flames defenders in the Phantoms' loss to Valley Lutheran in the state tournament Feb. 17 at Prescott High School.

Longhoma led the team in total rebounds with 11, including 7 offensive rebounds leading to second-chance points. Keebahe pulled in 7 rebounds, followed by Smith with 6. Bob had 7 steals on the day.

The Lady Phantoms defeated the Lynx 50-21, with sophomore Savannah Longhoma (13 points) and junior Cayli Miles (12 points) leading the offense. The young team spread out the remainder of the points, with sophomores Maria Dugi, Kara Austin, Calley Scheller and Alana Keebahe chipping in 3, 4, 6 and 7 points each. Makiah Kennedy, one of the team’s two seniors, scored 5.

The team was also tough on defense, holding the Lynx to just two points in the second quarter and one point in the fourth. Austin hauled in a total of six rebounds with four assists with six steals. Miles, who has been a leader in steals the past two years, had five takeaways and four assists. Keebahe pulled down six rebounds.

The Lady Phantoms, who have gone to the state tournament the past two years, also have a unique opportunity to take their game on the road this year, traveling to a tournament in San Francisco. The team has been fundraising for the past several months through bake sales and other cash-raising opportunities like the Lions Club’s annual rummage sale.

“It’s an exciting get-together and a good team-building and togetherness activity for the girls and their families while we are working to reach our financial goal,” said Head Coach Rosie Evans. “Last month we raised $1,150 and just over $1,000 in September.”