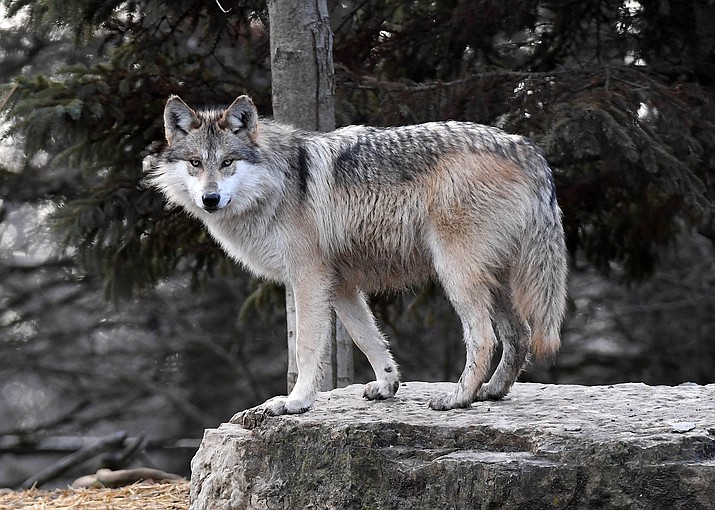 An Arizona man has pleaded guilty to shooting and killing an endangered Mexican gray wolf. (Photo courtesy of Jim Schultz)

The U.S. Fish and Wildlife Service announced Friday that Jason William Kunkel, of Peoria, Arizona, was sentenced to five years of unsupervised probation after pleading guilty to the slaying of a Mexican wolf in December 2017.

Under the terms of his probation, Kunkel is banned from hunting and banned from the National Forests of Arizona.

He also had to forfeit his Remington Model 770, bolt action rifle with a scope to the U.S. Fish and Wildlife Service.

The most recent survey showed there were at least 114 endangered Mexican wolves in the wild in Arizona and New Mexico.

An endangered Mexican wolf escaped from a Colorado wildlife center where it had been taken to breed with other captive wolves, authorities said Nov. 21.

The year-old, captive-born male got out of an enclosure at the Colorado Wolf and Wildlife Center in the town of Divide, 55 miles (90 kilometers) south of Denver.

It escaped Nov. 11, the same day it arrived in Colorado with two other wolves, all from the California Wolf Center.

Trappers from the U.S. Fish and Wildlife Service and the U.S. Agriculture Department have set out multiple traps in hopes of recapturing it.

The wolf is not considered a threat to people but could become defensive if it feels threatened, said Rob Vernon of the Association of Zoos and Aquariums. The association has a program to breed Mexican wolves in captivity in hopes they can be released into the wild.

Because Mexican wolves are endangered, it is illegal to kill them unless defending human life.

Wild wolves have been known to attack livestock, but Vernon did not know if the escaped male would do that.

"Whether it will instinctually attack something, that's hard to say," he said.

Because it has been raised in captivity and has not been taught survival skills, it may not be able to fend for itself, Vernon said.

"We're hoping the public can help us keep an eye out for the little guy," he said.

The escaped wolf is slightly smaller than a full-grown male, which typically weighs 50 to 80 pounds (22 to 36 kilograms) and is about ive and a half feet (1.3 meters) long including tail, Vernon said.

The wolf did not have a collar or ear tag but could be identifiable because it is blind in its right eye, which is mostly black, officials said.

Asked why officials waited 10 days to notify the public of the wolf's escape, Vernon said the animal was not considered a public safety threat and teams had hoped to capture it quickly.

The wolf escaped through an opening in a structure in a wolf enclosure, Vernon said. The opening had been missed during routine inspections but has since been repaired.

The Colorado Wolf and Wildlife Center referred questions to the Fish and Wildlife Service, which oversees endangered species programs. An agency spokeswoman didn't immediately respond to a phone call and email.

The Colorado center has participated in the zoo association's wolf breeding program since 2008.

The Fish and Wildlife Service is reintroducing Mexican wolves in Arizona and New Mexico, part of their original range. The most recent survey showed there were at least 114 wolves in the wild in the two states.

No wild wolves are known to live in Colorado, although they do range into the state from neighboring states, said Rebecca Ferrell, a spokeswoman for Colorado Parks and Wildlife.