Two walk away from airplane crash in Williams 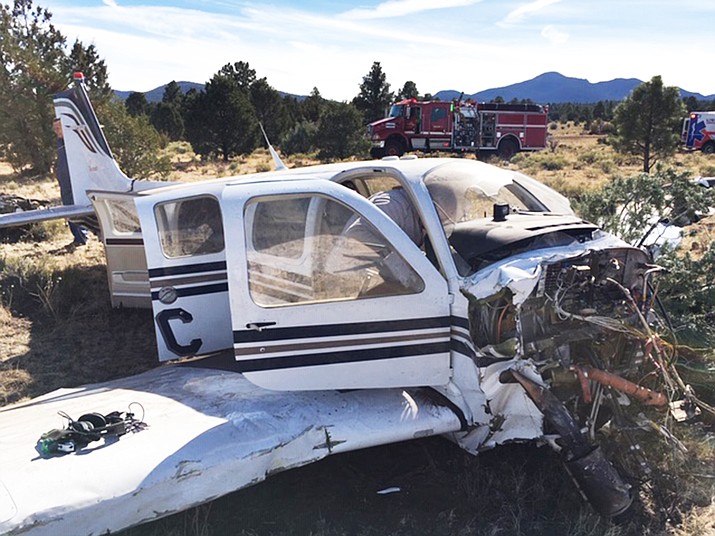 According to Assistant Fire Chief John Moede, two men were on board the Beechcraft Bonanza A36 when it crashed into trees around 2 p.m. Neither sustained serious injury.

The pilot, 75-year-old Reiner Schliett, and passenger, 73-year-old James Friel were enroute from Delaware to Catalina Island, California when they stopped at the Williams airport for fuel.

As they departed the airport, the pilot said the airplane began to stall and crashed into two trees just south of the airport, according to Moede.

The plane suffered extensive damage to the wings, nose and fuselage.

“The way I understand it is they were taking off and weren’t sure what happened,” Moede said. “The pilot said he did his calculations and said everything was good. I believe he was getting a stall indicator as he was taking off.”

The initial call came from Schliett via cell phone to the Williams Dispatch Center. Schliett said the two were trapped inside the plane.

Initially the pair were uncertain of their location. 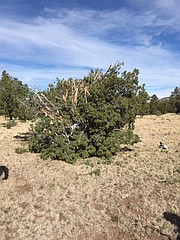 “When they were sitting on the ground they couldn’t tell where they were,” Moede said. “They knew they were south of the airport. The deputies found them first. We headed to the airport but were told to take the gas line road.”

“It seemed like they were able to maintain level and when they hit the small tree, they hit ground and slid,” Moede said. “They slid on their belly from 100-150 yards.”

Moede said the nose of the plane suffered extensive damage, which also made the doors unable to open.

“They couldn’t get out of the aircraft, but got in the back section and were finally able to get out that door,” Moede said. “The door on the passenger side was jammed.”

Moede said a major concern with an aircraft incident is fire.

“We don’t want it to get worse, we checked to see if they were ok and then made sure there wasn’t going to be a fire,” Moede said.

Moede said one fuel tank was found close to the wreckage and the pilot was able to close the fuel lines.

“We didn’t have to worry about shutting down the electrical because the engine and power unit were torn from the fuselage,” Moede said.

Life Line Ambulance also responded to the scene and checked Schliett and Friel for injuries. Both refused transport.

Moede said Schliett and Friel were wise to strap their luggage down in the fuselage.

“They had strapped all their luggage down which probably saved their lives,” he said. “Anything that’s loose back there will go everywhere.”

Nixon said since the airport is within the city limits, Williams officers took the initial report and secured the scene before turning over the incident to the FAA.

“They were very lucky,” said Williams Police Chief Herman Nixon. “I told them they should go buy lottery tickets.”