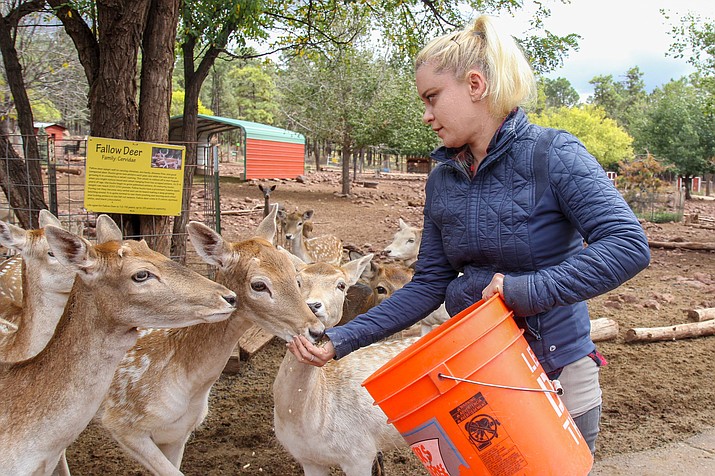 “It may be an impossible challenge, because states that we didn’t think were going to get it (CWD) now have it,” said Anne Justice-Allen, a wildlife veterinarian with the Arizona Game & Fish Department. The department hopes to test more than 1,200 samples this hunting season for chronic wasting disease. (Photo by Stephanie Morse/Cronkite News)

Gage Martinez, 14, was one of the last to return with an elk, but by midmorning, it was skinned and hanging from a tree by its hind legs.

“I was so excited, my hand was shaking,” Martinez said.

Meanwhile, three Arizona Game & Fish Department biologists gathered around the elk’s head. One of them used a small knife to cut into the animal’s cheek to remove the lymph nodes, which will be sent to a lab in Colorado to be tested for chronic wasting disease, or CWD.

So far, regular testing and strict laws have kept Arizona CWD free. But that could change quickly.

“It’s a big challenge,” said Anne Justice-Allen, a wildlife veterinarian with Arizona Game & Fish. “It may be an impossible challenge, because states that we didn’t think were going to get it now have it.”

Last year, CWD was found in Montana. The year before, it was discovered in Arkansas. The disease now has been detected in 24 states, where it has reduced herds by 20 to 40 percent.

“We need to make sure that wildlife populations are healthy because they really play an important role in keeping the landscape and the environment sustained,” Justice-Allen said.

Researchers are trying to learn more about the disease and to find a vaccine, but right now there is no cure.

Rusty Rogers, a hunter and a committee member of the White Mountain Chapter of the Rocky Mountain Elk Foundation, worries about the possibility of chronic wasting disease coming to the state. He said all it would take is one case of CWD to devastate deer and elk herds. (Photo by Stephanie Morse/Cronkite News)

“In Colorado and other states, we don’t know how to eradicate it,” said Travis Duncan, a spokesman with Colorado’s Park and Wildlife Department. “All we can do is manage it.”

Hunters are on the front line of Arizona’s efforts to keep the disease at bay.

There is no way to determine whether a deer or elk has CWD until the late stages of the disease, when physical symptoms appear.

“You may have seen signage or posters with sick-looking deer that lead us to believe anyone can visually identify it,” Duncan said. “But in reality, most deer with CWD look perfectly healthy and you would never be able to tell.”

There is no blood test for CWD, so the animal must be dead to collect and test a lymph-node sample.

“That’s part of the reason why managing it through hunting and testing the deer that people harvest is the best option we have,” Duncan said.

Hunting season is the only time of the year when Arizona Game & Fish can regularly test for CWD. The goal is to test as many animals as possible during this time.

Last year, the department tested more than 1,200 samples statewide, and officials hope to test even more this year.

“Our goal is to test enough animals on an annual basis to try and make sure we can detect it if it’s present in even just 1 percent of the population,” Justice-Allen said.

Arizona Game & Fish opened a new testing center in Springerville to help with this goal, and Justice-Allen and her team are going to more hunting camps this season to collect samples and spread awareness.

“We’re talking to hunters and letting them know what we’re doing out here and why it’s important that we’re doing the disease-monitoring project and taking samples,” said David Drever, a biologist intern with Game & Fish.

Not all hunters, however, process the meat themselves or take the time to voluntarily provide their animal for testing, so the department pays professional taxidermists and meat processors to fill in the gaps. Justice-Allen said about half of the samples Game & Fish tests are collected from these sources.

Beyond testing, Arizona has strict laws related to captive deer management and how deer meat is handled. Experts say these measures are another key part of the state’s success at keeping CWD out of the state.

Arizona has banned traditional deer farms where private owners raise deer to hunt or sell byproducts because of concerns about the potential role these farms could have in spreading CWD.

But zoos and animal sanctuaries, such as Grand Canyon Deer Farm near Williams, are allowed to keep captive deer.

Amy Kravitz, a biologist at the deer farm, said the farm submits deer for disease testing anytime one dies. The farm also needs special permission from Game & Fish to import deer, she said, and can only bring in animals from CWD-free states.

The state also bans people from bringing whole deer carcasses or central nervous tissue — the brain and spinal cord, which contain the highest concentrations of the protein that causes CWD — into Arizona.

In addition, Arizona is one of only a few states to ban hunters from using deer urine or grain feed as bait to attract game, because of concerns these methods can cause the disease to spread more quickly.

“Some of these things occur in other areas of the country,” Justice-Allen said. “Here we’re cautious and just don’t allow it.”

Despite such efforts, chronic wasting disease has continued to spread since it was first detected in wild deer populations in Colorado in 1981.

“It’s something that we’re always thinking about and concerned about,” Justice-Allen said.

This is part of the reason why Arizona Game & Fish has redoubled its efforts in recent years to collect more samples. The disease, however, often is spread by natural deer movement, which can’t be controlled. Wild deer can travel 50 to 100 miles, so it’s possible CWD infected deer from a neighboring state can cross into Arizona.

“In some states like Montana, where it was just detected last year,” Justice-Allen said, “it’s probably been there for a year or two before they found it.”

If the disease comes to Arizona, state workers and hunters hope it will be discovered in a few months instead of a few years.

“We try very hard to manage our herds to keep them at a maximum level, and all it would take is one serious case of CWD to just throw everything out of balance,” said Rusty Rogers, an avid hunter and committee member for the White Mountain chapter of the Rocky Mountain Elk Foundation.

The quicker Game & Fish can respond, the greater the likelihood it could limit the spread of the disease.

The department would have to remove the infected deer and any other deer that could have come in contact with the infected animal and its waste.

In other states after CWD was detected, officials released bonus tags to hunters for trying to keep the deer population down, and instituted mandatory CWD testing.

A long road ahead

AZGFD spends about $70,000 on CWD testing each year, which is around 27 percent of its wildlife-health budget.

The department hires extra interns in the fall to help operate the Springerville testing station and another one in Kaibab, pick up samples from taxidermists and meat processors, and monitor hunting camps.

“It’s a lot easier for us to keep diseases out than it is to try and control them once they’re here,” Justice-Allen said.

Knowing their game is safe to eat also provides hunters with peace of mind.

“To be clear, it has never been found to cross the species barrier from deer or elk to humans,” Drever said, “but it is still a concern that people have had in their minds of ‘Do I want to eat an animal that has a disease?’”