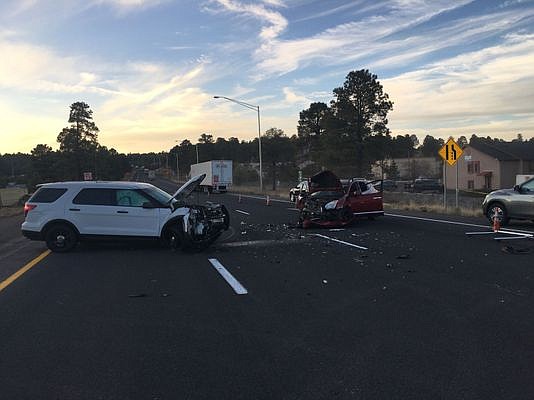 An AZDPS Trooper stopped a wrong-way driver on I-40 in Flagstaff Nov. 17. (AZDPS Photo)

FLAGSTAFF, Ariz. — An Arizona Department of Public Safety Trooper was injured after colliding with a wrong-way driver on I-40 near Flagstaff Nov. 17.

According to the Flagstaff dispatch center, at 3:39 p.m. reports began coming in regarding a red Nissan Rogue driving recklessly on Milton Road. The callers stated the vehicle had almost struck several cars and was driving on the sidewalk.

Officials said a trooper found the vehicle on Interstate 40 and tried to contact the driver. The driver then fled and began driving eastbound in the westbound lanes on I-40 near milepost 195.

A DPS sergeant in the area located the vehicle on I-40 and was involved in a collision with the Nissan Rogue just west of the I-40 exit to Milton Road.

The road was closed for about an hour following the crash at milepost 194, with traffic backed up for several miles.

The sergeant, the female driver and a juvenile passenger were transported to Flagstaff Medical Center for non-life threatening injuries.

DPS said impairment of the driver has not been ruled out and the investigation is ongoing.