Book Review: Emerging readers in for a colorful treat with 'Rosa Gets It Right' 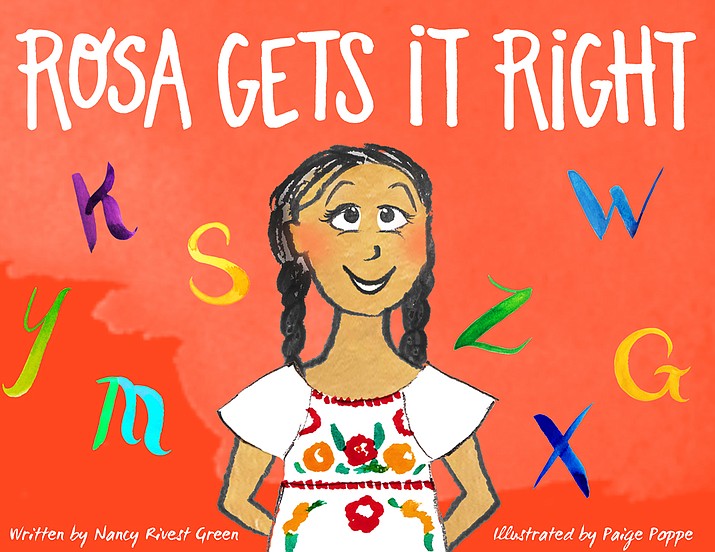 Green's latest book, "Rosa Gets It Right," is an early-learner alphabet book with both English and Spanish words and a scavenger hunt for eager readers. (Submitted photo)

Smart-as-a-whip Rosa, a feisty little girl with pigtails and an ever-curious attitude, is so tired of hearing, “Wrong again, Rosa!” A visit to her local library changes everything for Rosa, and she learns that reading can finally help her get it right.

Green, whose last book ventured into the canyon lands in her home state of Arizona, envisioned the world of Mexico in the 1940s — home to the small, colorful villages just like Rosa’s. Green said Rosa’s story had been swirling around in her head for a long, long time, since college, in fact.

“This story has been in my head for a long time, and I just felt drawn to going back and working on it,” she said.

Green said the idea for the story began in an interesting way — a nap, which was never something she was particularly fond of, according to her mother.

“This one day, at the University of Arizona, I just fell asleep in the middle of the afternoon in my dorm room, and I dreamed this book,” she said. “I had to get up and go to class, so I begged a friend to take notes for me so I could write down this book. It’s been in my head ever since.”

Green has traveled to Mexico several times, and the brightly colored homes and scenic vistas are an important part of Rosa’s world and the feeling of the book. Green said she chose her illustrator, Paige Poppe, for her bright watercolor style.

“She’s a young woman just out of college, lots of enthusiasm,” Green said. “She uses those bright colors that you see everywhere in Mexico — I thought she was such a good match for this book.”

The book also holds a couple of surprises for young readers as well — Green introduces a few Spanish words into the alphabet section of the book, as well as a scavenger hunt.

Each of the alphabet words is located somewhere in the story so young readers can go back and find them,” Green said.

“Rosa Gets It Right” is dedicated to Eve Watson, a park ranger Green became friends with during her year at Grand Canyon.

“I never knew her as a little girl, but she was kind of feisty, and imagine she was a lot like Rosa when she was young,” Green chuckled.

The book, which officially launched Sept. 23, is currently for sale at squarepegbookshop.com. Green said she plans to embark on a book tour in Flagstaff and other communities soon.