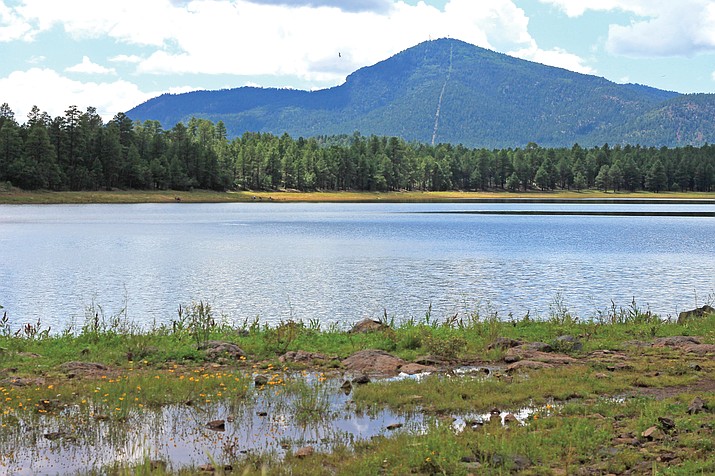 Aging pipelines will move into their first phase of updates following the approval of a $2.5 million loan to replace the Dogtown water line. (Wendy Howell/WGCN)

WILLIAMS, Ariz. — City leaders took the first step toward confronting aging water lines in the city of Williams by approving a $2.5 million loan to replace the Dogtown water line.

Replacement of the Dogtown water line was identified as a top priority in the recently completed Water Master Plan conducted by Woodsen Engineering. The water line is presumed to be 60-70 years old — a holdover from when the railroad used water for its steam engines — and is under constant repair.

Officials at the Williams water treatment plant believe that 10-18 percent of the water produced in Williams is lost in the system, and engineers suspect much of that loss is from the antiquated Dogtown water line.

Currently the city uses Dogtown Wells 1 and 3 and Dogtown Lake as the primary source of water for the city. However, the well water and lake water are combined into one water line that carries the mixed water to the Cataract Pump Station, which is then pumped to the city’s water treatment plant for processing.

The engineers outlined a plan to replace the Dogtown water line with two lines, one that would come from the wells and one from the lake. The water from the wells would be lightly treated and sent straight to a storage tank. The lake water would be pumped to the water treatment plant.

The two wells are the highest producing wells for the city, generating approximately 250 gallons a minute.

Another bonus to the separate water lines is the possibility of allowing other sources of water to be put into the system with the added capacity.

The city secured the $2.5 million loan for the design phase of the project, with the design fee estimated at $1.65 million. The interest is semi-annual at 1 percent, with the principal to be refinanced into a construction loan, or paid in full, within three years.

WIFA has approved an 80 percent subsidy for the loan.

“Right now with the design loan, the subsidy would be 80 percent,” Buonocure said. “That’s very good.”

The city anticipates that revenue generated by its water and sewer funds will be used to repay the loan.

Once the design phase is complete, Buonocore said the city will then apply for a construction loan. The total estimate for the project is $15 million.

“This puts us in a good position for when we go for the construction loan because they already funded the design,” Buonocore said.

The city has tasked Woodsen Engineering with the design plans and construction administration for the replacement of the Dogtown water line.

The engineers estimate the proposed water lines will be 80,000 linear feet or 15 miles.

Boundary and topographical surveys will be conducted, which could include 30 private parcels and US Forest Service land among others. BNSF and ADOT agreements will be worked to allow the water lines to cross the railroad and portions of Route 66. An environmental assessment will be completed and proposed alignments may be reviewed if sensitive areas are discovered during the process.

The design phase is expected to last up to two years, and if approved, the construction phase would last approximately four years.

The foundation for the new Williams Health Clinic is in place. (Wendy Howell/WGCN)

George Glen was appointed to the Planning and Zoning Commission at the Nov. 8 Williams City Council meeting. He will replace outgoing member Harry Schmitz.

The council reviewed the Request for Proposals for the management of Elephant Rocks Golf Course. Golf Committee member Don Dent said the group hopes to review proposals at its Dec. 5 meeting and begin interviews. They will then make a recommendation at the Dec. 13 city council meeting.

Williams Fire Chief Chase Pearson said the department is continuing its work on fire prevention. They have several carbon monoxide detectors for residents. They plan to get the message out about preventing carbon monoxide poisoning as people begin using their furnaces this winter.

Williams Police Department is gearing up for its annual toy drive. Police Chief Herman Nixon said the program will be different this year, but anyone who knows someone with a need should contact the station.