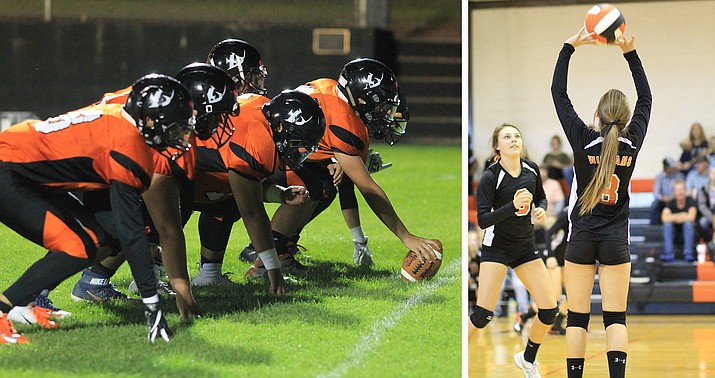 Vikings football and volleyball teams finished their state playoff runs this weekend. The Vikings lost to Hayden in the semifinals and the Lady Vikes lost to NFL YET. (Wendy Howell/WGCN)

WILLIAMS, Ariz. — The Williams Vikings football and volleyball teams’ playoff runs came to a sudden halt this weekend, as the Lady Vikes lost to NFL YET and Vikings football lost to Hayden.

After going undefeated throughout the season, the Vikings streak ended with a 30-6 loss to the Lobos in the state semifinals. After suffering injuries to over half of its starters, the Vikings entered the game with several determined, albeit less experienced players to carry the team.

The Vikings lost David Lozano, Chance Pearson and Kolby Payne to earlier season injuries and then lost Dorian Ayala to appendicitis the day of the semifinal game.

“We were just beat up and we didn’t compete at the level we needed to,” Brownlee said.

Viewers of the Vikings semifinal game saw almost a complete turnover of players. Many of the juniors and seniors were replaced with lesser experienced sophomores and freshmen who went up against a tough Hayden team.

“You expect to have bumps and bruises throughout the season,” Brownlee said. “But when you lose your starting quarterback and your starting running back, who is also a linebacker on the defensive side, before the quarterfinal game, that is a big void to fill.”

Brownlee said the coaches felt they had a good plan going into the game with Hayden, but said it was difficult for the back-up players to learn their new roles so quickly.

“I have to give a shout out to those players though,” Brownlee said. “They were determined and brought and intensity to the game.”

Brownlee said sophomore Alex Garrett played his best game of the season as he was one of the few remaining seasoned players.

“He had some great plays, both on the defensive and offensive side, he played very well, and was a leader for the team,” he said.

Garrett penetrated the defense for a 56-yard TD rush in the second quarter, Williams sole touchdown of the game.

“Mario had an exceptional game and played in a position he was unfamiliar with,” Brownlee said. “We were going over plays on the bus ride down to the game.”

Brownlee said he was also impressed with the play of Caesar Santana and Zain Grantham.

“Zain played his heart out,” Brownlee said. “He was frustrated and that kid wants to be 100 percent right and 100 percent effective all the time.”

Brownlee also called out Angel Ayala who had a big interception and a fumble recovery in the game.

“As a coaching staff we felt like we could have been in that championship game,” he said. “We feel if there’s anybody that could give Superior a good game, it would be us.”

Brownlee said he looks forward to next year and said the staff believes the team will be right back in the running for the state championship next year.

“Unfortunately we have to wait a year, but we have a lot of work to do before then,” he said.

The Lady Vikes dominated through most of the season going 15-3 and ranked fourth in the state.

“The girls just had an outstanding season,” said head coach Connie Stevens. “We just came up short in the end.”

Stevens said the lack of tough competition in the regular season hindered the team in the state playoffs.

“We just didn’t have an opportunity to learn from playing experienced teams,” Stevens said.

Stevens said she was pleased the Lady Vikes play this season and looks forward to having almost a complete return of players next season.

“We are going to be a force next year,” she said. “We are only losing one senior.”

Mogollon went on to win the 1A State Championship title Nov. 3.