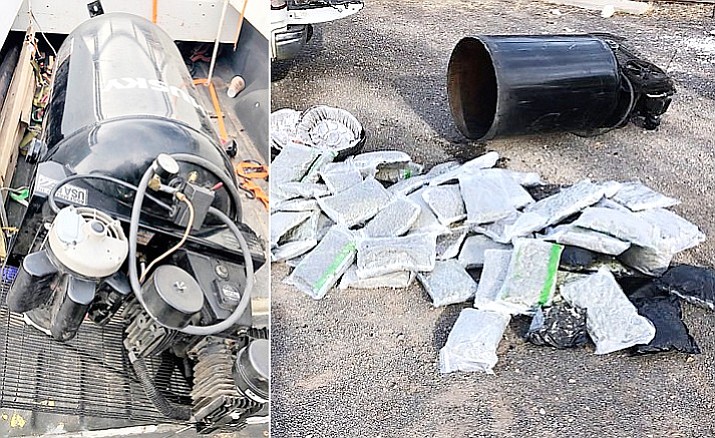 More than 70 pounds of marijuana was found inside an air compressor tank that was in the bed of a truck traveling along I-40 near Ash Fork Oct. 29. (YCSO)

ASH FORK, Ariz. — More than 96 pounds of marijuana was seized by authorities after a traffic stop along east Interstate 40 near Ash Fork Oct. 29.

At about 6:30 a.m., Yavapai County Sheriff’s Office (YCSO) K9 deputies were monitoring traffic in the area when one of the units stopped a white 2000 Ford F-150 for an equipment violation.

While speaking with the driver, 31-year-old Carlos Fabricio Vileriano from California, the deputy noticed a pill bottle on the passenger seat that contained marijuana, YCSO reported. It was eventually determined Vileriano was driving on a suspended license.

Vileriano remained unusually nervous while speaking with the deputy and seemed unsure about his travel itinerary except for the New Mexico area being his intended destination, YCSO reported. The bed of the vehicle contained several exposed tanks including large ones designed to carry propane and acetylene.

Inside a plastic box on the passenger seat, deputies found nearly five pounds of packaged marijuana, YCSO reported. Several of the tanks in the bed of the truck also appeared to have been tampered with, so the truck was removed from the highway to an inspection area.

The black acetylene tank had lightweight car body filler, aka “Bondo” brand, on the bottom of the tank. There was no obvious point of entry, but the tank had been freshly painted and was unusually heavy, YCSO reported. When the valve was opened, there was no pressure or evidence of gas. Deputies surmised the tank may have a hidden compartment.

The white propane tank was examined and several indications that the tank had been tampered with were noticed, YCSO reported. This included non-matching aftermarket welds on the tank bottom. When the valve was opened, an odor of marijuana was detected.

Deputies also removed a valve on a black air compressor tank taken out of the truck and could see plastic bags inside containing marijuana.

Unable to access the contents of these tanks otherwise, deputies borrowed an extraction saw from local fire personnel and cut each tank open in areas where there was an obvious pre-determined access point, YCSO reported. Inside the white tank, deputies found about 20 pounds of marijuana in various plastic bags, which appeared to have been placed through an opening cut into the tank and then welded shut before transportation. Inside the black compressor tank was more than 70 pounds of marijuana. Nothing but a large amount of body filler was found in the other black tank.

Further search of the truck interior revealed a small quantity of methamphetamine. Vileriano admitted to smoking meth before starting his trip and having knowledge of the marijuana found inside the truck. He claimed not to know about the additional marijuana in the tanks, YCSO reported.