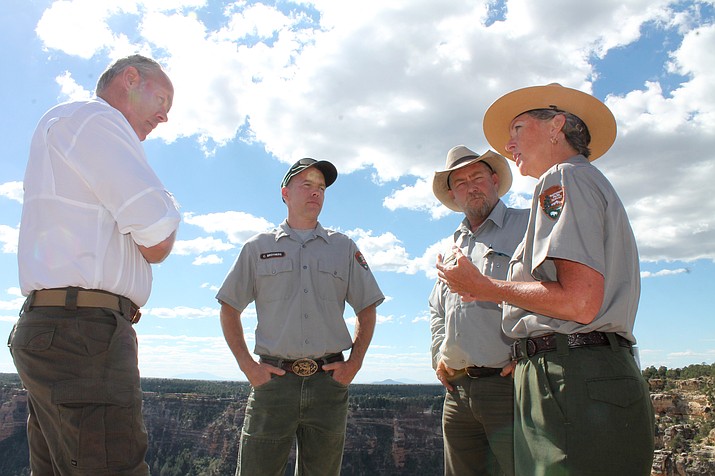 GRAND CANYON, Ariz. — Arizona’s national parks are feeling their age and need a $531 million makeover on hundreds of roads and buildings that serve millions of annual visitors, park officials said. It’s a problem in national parks across the country, but financial rescue may be edging closer.

The Grand Canyon, Petrified National Forest and other recreation sites, such as Glen Canyon National Recreation Area, are sagging under the weight of their popularity. As visitors increased 40 percent over six years at the Grand Canyon — 17 percent at all U.S. national parks — maintenance to parks and monuments has been delayed year after year.

Few claim the situation is dire, but advocates say the economic draw of tourism warrants timely renovations and repairs.

The backlog sweeps across the country, spurring concern in some quarters.

Painting over a backlog

“Grand Canyon National Park has thousands of structures and hundreds of miles of roads, and it’s a lot to take care of,” said Chris Lehnertz, the park superintendent.

The most pressing need is repairing the only water pipeline serving the South Rim, which is leaking, prompting water rationing.

Some volunteers said they are trying to make a dent in maintenance projects, one brush stroke at a time, and are spending weekends doing what they can.

One day in September, several volunteers and Secretary of the Interior Ryan Zinke brushed reddish brown paint on the walls of six cabins built in the 1930s in Grand Canyon Village. The volunteers hailed from Coconino Community College in Flagstaff, which has a new class that requires students to volunteer at the park.

“It’s a great real-world experience,” said college President Colleen Smith. “Everybody works together and as a team, and that’s what it takes to get things done.”

But volunteers can accomplish just a sliver of what needs to be done. One estimate by the Arizona Trail Association is that one hour of volunteering is worth a little more than $24. In those few hours that September weekend, nine volunteers made a $1,111 dent in the multimillion-dollar backlog, according to the National Park Service.

Zinke said Congress needs to work across the aisle to approve funding for national parks in the U.S., where the total backlog has reached $11.6 billion.

“Parks are not a Republican or Democrat issue,” said Zinke, who was appointed by President Donald Trump. “Parks are an American issue.”

A bipartisan bill, introduced by Arizona and Utah congressmen, called the Restore Our Parks and Public Lands Act, last month passed the House Natural Resource Committee on a voice vote. It still has to make it through the full House and Senate.