Arizona flu season off to a fast start 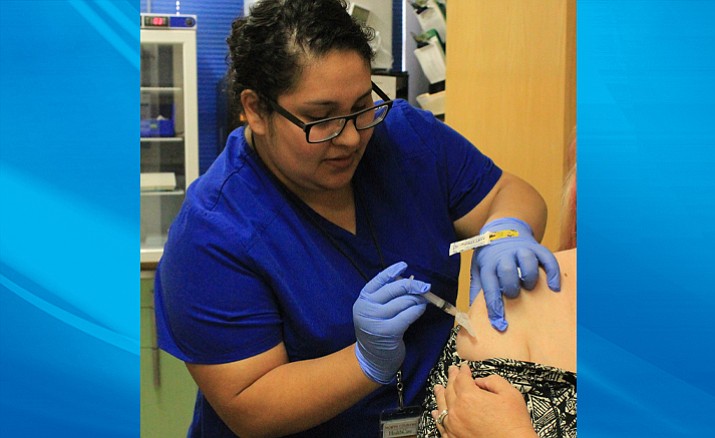 North Country HealthCare employee Lupe Duran administers a vaccination for the flu Nov. 18. Shots are now available at the Williams Clinic and Safeway.

PHOENIX -- Three weeks into this flu season, the Arizona Department of Health Services already had confirmed 96 cases, slightly above last year’s numbers but close to three times the number of confirmed cases at this point in a typical year.

“We are seeing some similar case numbers, maybe even a little bit of an increase from what we saw from the previous year,” said Eugene Livar, interim chief of the Bureau of Epidemiology and Disease Control at the health department. “We are definitely higher than what we’ve seen for the average for this time of year.”

But although that may not look like a good start, Livar said “the only predictable thing about the flu season is that it’s unpredictable.”

So far, the 2018-19 flu season is keeping pace with 2017-18, which was one of the worst in years in Arizona, with the state’s 35,570 reported cases more than three times the average of the preceding three seasons. The flu was cited in 1,178 deaths in the state last year, compared with a five-year average of 740 flu-related deaths, according to health department data.

One clue to what might happen in the U.S. is how the flu season played out in the Southern Hemisphere during fall and winter there, said Grant McFadden, director of the ASU Biodesign Center for Immunotherapy, Vaccines and Virotherapy.

“Usually, flu strains that circulate up here begin by circulating in the Southern Hemisphere,” he said. “So what happens in Australia is a harbinger of what can happen up here.

“By the way, I understand is that the flu virus circulating this year is a little nastier than usual, makes people a little bit sicker.”

One thing experts do know is that getting the flu shot is the best way to prevent infection, and the Centers for Disease Control and Prevention urges people to get vaccinated before the virus starts spreading throughout the population.

Two types of flu shots are available this season, state health officials said. Both will protect people from the two current strains of flu virus, but Livar said it’s “important to know that the flu will still cause the same signs and symptoms whether you get A or B.”

Even though there are two kinds of vaccine available, the CDC said there is “no preference expressed for any one vaccine over another,” and that everyone older than 6 months should get vaccinated.

Despite widespread publicity, Livar said his department still hears common misconceptions about the disease and the vaccine.

“One of the common ones (misconceptions) that we do get is that the flu shot will cause the flu, and that is incorrect,” he said.

“The flu shot is one of the best tools you have available to help protect you and your family from the flu, along with washing your hands, covering your cough and staying home when you’re sick to help prevent spreading the flu and other illnesses.”

Another mistake, McFadden said, is not taking the flu seriously.

“As many people can die from the flu as in a car accident,” he said. “I guess the major misconception is for people to underestimate how dangerous and deadly flu can be.”