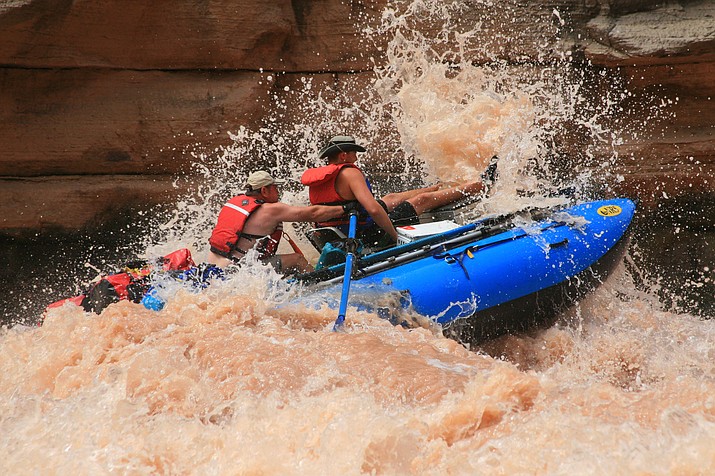 Four hundred and sixty-eight permits are available for 12 to 25 day river trips on the Colorado through the Grand Canyon for non-commercial trips.

LEE'S FERRY, Ariz. — Twelve-year-old Max Hurndon has just completed his second do-it-yourself paddle of the Grand Canyon, Lee’s Ferry to Pearce Ferry. Max made the trip in his kayak self-support this time, as did his father and another friend. The trio paddled with another group with a regular kayak and a raft. The group launched May 1 and were out 10 nights, reaching Pearce Ferry early in the morning of May 11.

Max and his father kayaked Grand Canyon late last summer, not long after his 12th birthday. Having just completed his second paddle of the Grand Canyon a week before his 13th birthday, Max becomes the first 12-year-old to paddle the entire length of Grand Canyon twice under his own steam.

Max found his self-support kayak was able to punch through the big waves easier, and had more momentum. There were two rapids, 24.5 Mile and Crystal, where Max was flipped and his spray skirt failed. He was able to paddle to shore, drain the water out of his kayak, and then continue. Max explained that everything in his kayak's hatch was dry. A watertight bulkhead in the boat provided extra protection from water. Food and two chairs in dry bags in front of his feet also remained dry.

The 280 mile long trip was somewhat easier for Max this year, as he knew some lines through the rapids and had a general idea of what he needed to do, and what was worth seeing. And he learned a good lesson about trash management. At one point, Max clipped his lifejacket to a small tree. A pocket in his jacket had some candy in it. In the morning, Max put his life jacket on and was suddenly overrun with ants.

This time Max found his hands and fingers cracked and became quite sunburned. Next time he will work on using more sunscreen and hand lotion.

Toward the end of their trip, with weather reports supplied by his mother back in Georgia, the group knew severe winds were headed their way. The river runners decided to make a long day’s paddle ahead of the storm. Launching from Indian Canyon Camp at 207 Mile, the group paddled all day and into the night, arriving at the 279 Mile river camp about 1:15 a.m., where they had dinner and went to bed. The 279 Mile Camp is just a half mile above the Pearce Ferry take-out ramp. Mike, Max’s father, noted that this was the longest single day paddle he and his son had done, 30 miles being their previous one day mileage.

Max’s parents are advocates for young adults paddling Grand Canyon only if the parents and youth spend time beforehand investing in training in whitewater. Mike noted it is important to learn competence in an effective roll and maintain bow management while remaining calm under stress. Mike has recently started a local chapter of Team River Runner, an organization dedicated to get veterans like him out on rivers. He is also thrilled his wife is learning to roll a kayak.