Veterans ride to Washington D.C. during annual Run For The Wall 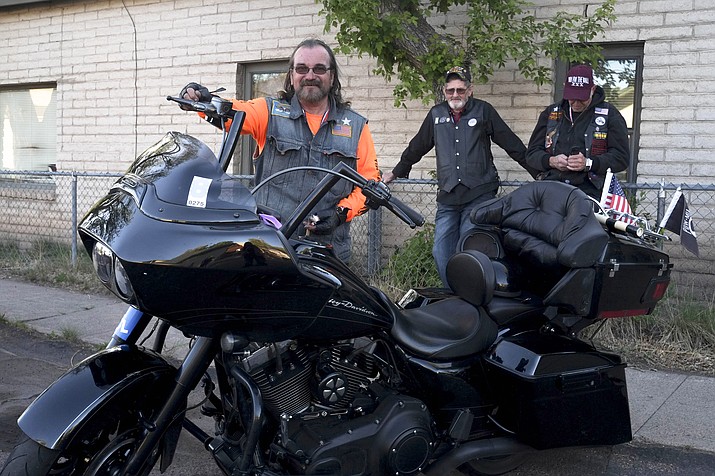 Run For The Wall riders rolled into Williams May 16 to enjoy a hot meal and warm bed for the night. Robie Vandiver (left) is one of nearly 1,600 riders. (Loretta Yerian/WGCN)

WILLIAMS, Ariz. — On May 16, more than 1,600 veteran motorcycle riders gather from all parts of the country and set out on an epic ride of more than 3,000 miles to Washington D.C. where they will converge at the capital May 27.

Run For The Wall Visits Williams 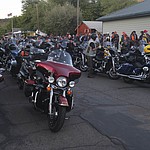 One of the first overnight stops riders make is in Williams, where American Legion Post No. 13 welcomes them with a hot meal and friendly smile.

Veterans from every branch of the military and of all ages make the ride. The goal is to educate future generations on the importance of accountability in wartime actions, emphasizing no one should be left behind.

Robie Vandiver, president of the Oregon Veterans Motorcycle Association for the state of Oregon, has gone on eight runs over the last 10 years.

“I started on this central route in 2008, so this is my tenth anniversary,” he said.

Vandiver said he will be riding the entire way to D.C.

“Absolutely, that’s the coveted patch,” he said. “I’ve always gone all the way.”

Participating in the run is a special opportunity for Vandiver. His son told him about the run and told him he should think about joining them.

“I decided to do it, not knowing what I was getting into. When I got on this side of the Rockies I started seeing patriotism like I had never seen — ever. The first time anybody said welcome home to was a 14-year-old kid standing in front of The Wall,” he said. “It was 20 years from my date of discharge. I lost it — two big Marines held me up. Vietnam veterans are among some of the most hated veterans in the world. This is what helps us get well and that’s why we do what we do for the vets coming home today. We make sure they get a welcome home.”

Vandiver served in the U.S. Air Force during the Vietnam War in 1974 and was there for the withdrawal of troops from Vietnam.

Vandiver said he is particularly excited to be on the run this year.

“This is a wellness ride this year,” he said. “I brought two brand new guys with me out of my group in Oregon. One of them is an army veteran who served deep in country in Vietnam. He’s wanted to do this for years and he just couldn’t bring himself to do it. He’s watched me over the last 10 years do it and now he’s here.”

The group makes stops at veteran homes and civic minded organizations and have scheduled lunch and dinner stops every day.

Run For The Wall began in 1989 when two Vietnam veterans, James Gregory and Bill Evans, rode their bikes across the country talking to local radio stations, newspapers and television stations about the thousands of men and women still unaccounted for from U.S. wars.

The Run For The Wall crew has been stopping in Williams for years. Some of the riders have made the ride annually for more than a decade.

The American Legion has been feeding the riders for the same number of years. The Williams Kiwanis Club served breakfast the next day, along with the Wild West Junction.

RFTW Aerial Video by Run for the Wall ®

The trip is a 10-day ride from Ontario, California, to the Vietnam Veterans Memorial in Washington, DC, where the run officially ends. On the last day, riders meet on the steps of the Lincoln Memorial just before noon on the Saturday before Memorial Day. From there, they walk as a group to The Wall and declare their mission complete by placing a plaque at the apex. There are other non-RFTW events scheduled throughout the weekend, including the opportunity to participate in the Rolling Thunder Parade in Washington, D.C. Rolling Thunder Parade has more than 350,000 motorcycles which start from the Pentagon parking lots, parading through downtown Washington and ending at The Wall.