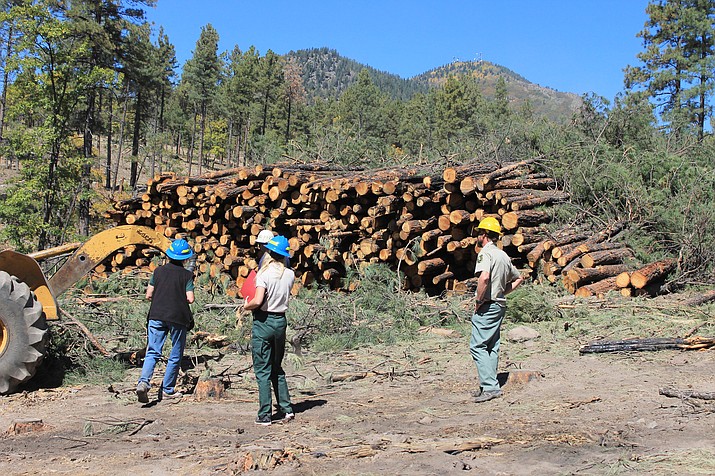 Kaibab National Forest employees observe the status of forest restoration efforts on the slopes of Bill Williams Mountain in October 2017.

Residents of Williams are keenly aware that a massive forest fire on Bill Williams would change the city as we know it today.

Now, because of a recent study by Northern Arizona University and the Alliance Bank Economic Policy Institute, forest managers can put a price tag to it.

According to the study, potential damages from a catastrophic wildfire and subsequent post-fire flooding in the Bill Williams Mountain watershed are estimated to be between $379 million and $694 million.

The price tag comes from two areas: damage from the fire and damage from resulting flooding.

Scientists have found fire not only destroys trees, low-lying vegetation, homes and other infrastructure, but it also severely alters the soil. After a severe fire, soils essentially are baked and thus become temporarily hydrophobic — they no longer are able to absorb water.

As a result of the soil condition, monsoon runoff rapidly pours down the mountain taking boulders, trees and other detritus downstream of the burns, causing significant damage to the mountain and the watershed below which includes the heart of Williams.

A portion of the study analyzed data gathered from the 2010 Schultz wildfire near Flagstaff.

An abandoned campfire sparked that 15,000 acre fire requiring the evacuation of 650 residences and the use of air tankers, helicopters, engines, water tenders and nearly 1,000 hand crews to extinguish.

The subsequent flooding was far more catastrophic to the community than the fire itself and resulted in over $130 million in economic impacts, the flooding of dozens of homes and the loss of a child in the debris flow.

Lucinda Andreani, interim deputy director of Coconino County, said FEMA chose to allocate the money to Coconino County for two reasons: one is the abundance of wildfires and flash flooding that has already occurred in the county, and two is the experience county officials have gained since the Schultz fire.

The county chose to look closely at Williams because of the Bill Williams Mountain watershed and the direct impact to the city below. The watershed has a high potential to burn, the potential debris flows could hit homes and two drainages lead to the city’s water reservoirs.

The 2018 Coconino County Post-Wildfire Debris-Flow and Flooding Assessment by JE Fuller provided the platform for the economic analysis of the properties, content and structures within Williams resulting from post-fire flooding events.

The study stated that increased runoff and erosion after intense wildfires on steep hillsides can increase peak runoff by up to 100 times the average.

Nearly 950 buildings lie in the flood zone. Loss of the residences would incur the highest cost at $135 million followed by accommodations at $91 million and retail at $24 million;

Damage to the BNSF railroad operations could cost $12 million to $23 million;

Catastrophic flooding could go over I-40 near the Country Club exit, which could damage the road and leave it impassable resulting in truck traffic disruption and delays that could cost $27 million to $53 million;

Subsequent loss of property values following the flooding is assumed at 6.7 percent;

Communications towers and other structures on top of Bill Williams could cost $39 million to $94 million to recover;

Dredging ash from the city’s water reservoirs and rebuilding the water treatment facility following post-fire runoff is estimated at $5 million to $10 million; and

The monetary loss from reduced tourism could cost $85 million to $170 million.

The authors of the study said the economic analysis results are conservative and the costs of a catastrophic fire with post-fire flooding is likely to be much higher and doesn’t include intangibles such as family heirlooms.

“We weren’t able to capture things like photo albums and things like mother’s drapes that have been passed on for years and years,” said Wade Rouse, one of the authors of the study. “To put value on that is very difficult.”

The study also did not include costs associated with damaged utilities, vehicle damage, street damage, impacts to outdoor recreation, impacts to air quality and associated health problems from ash and stress.

When compared to wildfire recovery costs, restoration of Bill Williams Mountain before a catastrophic wildfire is a cheaper alternative.

Not including the prescribed fire and thinning work that has already occurred or is planned around the base of Bill Williams Mountain, Kaibab National Forest estimates the costs of restoration on the mountain at $8 million to $10 million, according to Jackie Banks, public affairs officer for Kaibab National Forest.

Bill Williams Mountain Restoration Project was approved in 2015, and so far crews have treated close to 1,000 acres on the mountain.

The project aims to thin approximately 15,200 acres of dense vegetation on Bill Williams Mountain with traditional commercial timber harvesting and stewardship contracts, but will require more intricate hand felling, ground base logging and helicopter logging because of the steep, varied terrain.

The project has some flat areas for timber harvesting with heavy machinery, but the steep slopes and protected wildlife habitats require thinning by hand.

Although thinning on the steep slopes is challenging, the forest service has treated 700 acres with chainsaws, 200 acres with heavy equipment and completed prescriptions for 3,500 acres available as timber sales.