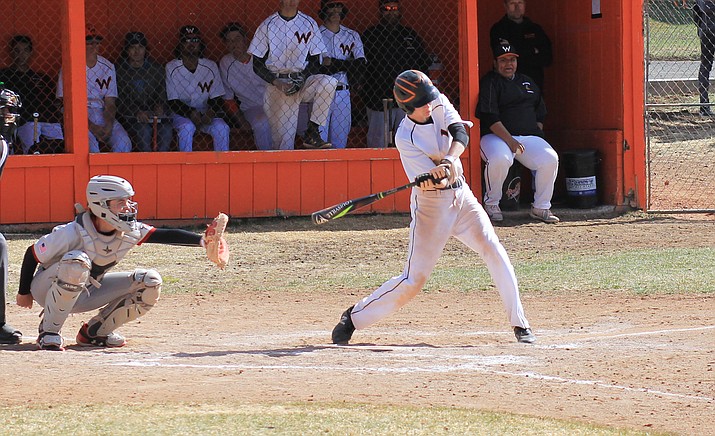 Payce Mortensen bats during an earlier season game. The Vikings went 20-8 in the season and were the 1A Central Region champions. (Wendy Howell/WGCN)

The Williams Vikings baseball team fell to No. 1 Bagdad 13-0 in the semifinal round of the 1A state playoff tournament May 11 at the Goodyear Baseball Complex.

The Vikings hitters were once again unable to score against Sultan starting pitcher Israel Loveall, mustering just three baserunners in the game. John Bryant had Williams’ lone hit, with Zain Grantham and Michael McNelly also reaching base via walks.

Bagdad, meanwhile, got on the board with five runs in the bottom of the first inning and never looked back on their way to a five-inning victory. Viking starter Frankie Kramer was not sharp, walking the first four batters of the game (including an intentional pass to Loveall) and six overall in his three innings of work. The Williams defense was also sloppy, committing six errors on the day.

Bagdad will move on to the state championship game May 14 at Tempe Diablo Stadium, where they will face defending champions Superior, which is coming off a 10-inning 3-1 victory over No. 2 Ray.

Bryant led the 1A Central Region in RBIs with 33 (also good for No. 2 overall in the 1A Division) and fielding percentage at .969.