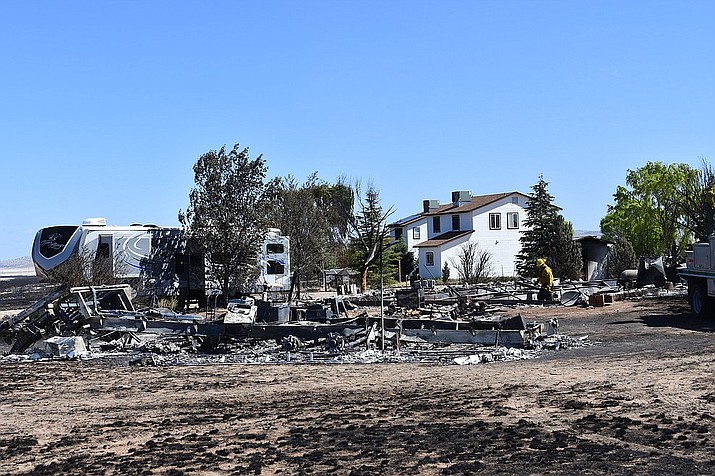 On the morning of May 12, 2018, a firefighter puts out hot spots on a home destroyed a day earlier by the Viewpoint Fire in the 7000 block of Whisper Ranch Road in the Poquito Valley community of Prescott Valley, Arizona. (Richard Haddad/WNI)

While more than 140 firefighters continue to make progress on containing the Viewpoint Fire that forced the evacuation of two communities in Prescott Valley, some residents returned Saturday morning only to find heartbreak.

Friday’s wildland fire destroyed two homes in the Poquito Valley area, while 12 other structures were lost along with four RV travel trailers and six vehicles, according to the Arizona Department of Forestry and Fire Management.

Fire investigators confirmed the blaze was human caused, and is still under investigation. Chase said right now, their best guess is the fire may have ignited by sparks created from safety chains via a trailer hitch. But that conclusion was not confirmed, he said.

Fire crews will continue to patrol for hot spots and begin mop-up efforts.

Starting shortly before noon Friday, CodeRED evacuation messages were sent out to residents in north Prescott Valley as the fire, driven by strong winds, ripped through the area.

Local police, sheriff and fire departments assisted in the evacuation efforts, with some going door-to-door. By 2 p.m., officials were beginning to move to prepare parts of Chino Valley for evacuation as the fire grew.

More than 400 structures were threatened as evacuations took place for a fire that raged to nearly 2,500 acres by mid-afternoon. More than 200 fire personnel were used at one point to help contain the blaze. A DC-10 airplane was used to drop fire retardant on the western edge of the Viewpoint Fire that started along 89A, and a helicopter was seen by locals collecting water from nearby Watson Lake in Prescott to help aid in the fight.

Firefighters had forward progress stopped on the fire around 4:30 p.m. Friday, roughly five hours after the initial report was called into the Arizona Interagency Dispatch Center.

See the original story in the Prescott Courier.