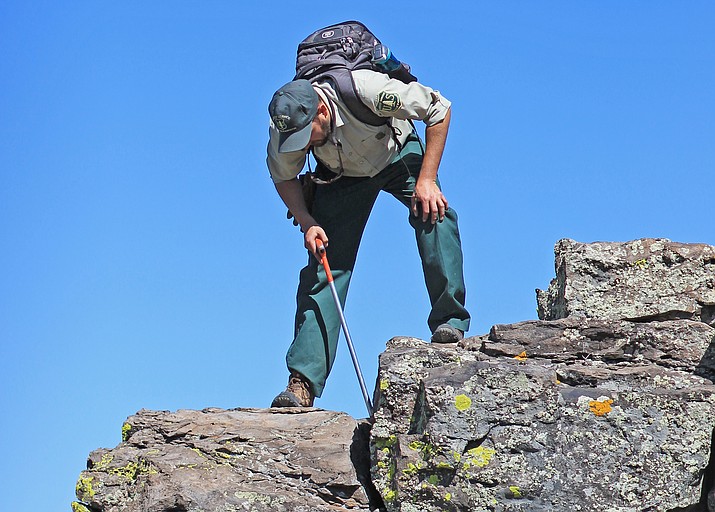 WILLIAMS, Ariz. — Poking sticks into rock crevices looking for rattlesnakes seems like something a precocious child might do, but last week it was two adult biologists playing this risky game in a remote section of Kaibab National Forest for the sake of conservation.

The biologists are tasked to evaluate how the restoration of the forest is impacting the biotic components of the forest, including reptiles like the

Biologists on the Kaibab are seeking den sites for the Arizona black rattlesnake to prevent impacts from loggers and other 4FRI activities.

The Arizona black rattlesnake is the most common rattlesnake in the higher elevations of northern Arizona. The species occurs from south of the Colorado River in Mohave County across the Mogollon Rim region eastward into Grant County in west-central New Mexico.

The snake is a medium-large species that typically is dark gray, dark olive or dark brown with numerous dark splotches. The splotches on the body morph into dark bands on the tail, which fade with age. Some of the species are darker than others and juveniles are considerably lighter-colored than adults.

Largent said not a lot is known about the Arizona black rattlesnakes, so biologists are uncertain how the intensive thinning and burning of the forest may affect them.

Bruce Christman and Travis Largent survey an area for dens.

“As a forest sensitive species, the regional forester has found reason to say we need to take another look at them,” Largent said. “It doesn’t mean they’re in decline, it means we just don’t know much about them.”

Kaibab Forest has contracted with Bruce Christman, a conservation herpetologist who, with Largent, is checking for den sites in the forest south of Williams.

Largent and Christman are using topographic maps that show potential den sites to guide their efforts. 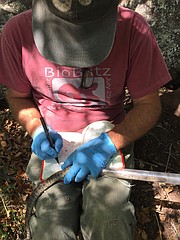 “Under 4FRI we’ve been tasked with developing a geospatial analysis based on suitable covariates to determine what would be suitable Arizona black habitat,” Largent said. “We are fool proofing this model, we’re testing it.”

Once the map is verified, Largent said forest managers can then use it to guide loggers and other forest users away from the den sites.

“The real purpose is that within this 4FRI management area, they (forest managers) can put a circle around it and say, ‘Don’t disturb these,’” Largent said.

Kaibab Forest has been surveying Arizona black rattlesnakes each spring and fall since 2016.

Christman said once a snake is located he spends some time determining if it is an actual den site.

“The best-case scenario is to come to a site and find five snakes here and around another pile of rocks is another five snakes, so we know it’s a den site,” he said. “That’s sort of the tricky part, deciding whether what you are seeing is telling you what you really hope to know.”

Christman said there can be hundreds of individuals using a den site and the protection of those sites is very important for the population viability.

“With global change, the prediction is that these populations (at the higher elevations) are probably going to be the ones left as the lower elevations become too hot and dry,” he said.

About the Arizona black rattlesnake

Scientists have identified 36 species of rattlesnake and Arizona is home to 13 of them, according to Arizona Game and Fish Department. All species are venomous with the venom made up of complex poisons. In addition to rattles, all rattlesnakes have a triangular shaped head, cat-like pupils and foldable fangs.

According to a 2007 study by Erika Nowak and Justin Schofer, Arizona black rattlesnakes are often found near springs and in riparian areas, as well as places with abundant woody debris, leaf litter, rock outcrops, talus and boulders.

Snakes emerge from communal hibernation dens in the spring and will often bask at communal sites and then return to the den at night to avoid cold temperatures.

Scientists agree that rattlesnakes are defensive and the rattle of the snake’s tail is a warning sign. The Arizona black rattlesnake has a unique rattle sound that is similar to a buzzing insect, Christman said.

“If you were to skin a rattlesnake, the body muscles are white or opaque in color, but the tale is a deep red,” he said. “If you cut the tail off and try to shake it, you won’t get anywhere close to that sound. The muscles fire as fast as hummingbirds wings.”

“The fang design and venom delivery apparatus is state of the art,” he said. “When they strike with their mouth, their fangs come out and hit and their lower jaw closes.”

As hunters, rattlesnakes smell their prey with their tongue and use heat sensing pits on their face to strike with accuracy.

“A rattlesnake just hits their prey and immediately lets go,” Christman said. “The prey then runs off and succumbs to the bite. The snake picks up the trail of the prey and follows it and eats it.”

Rattlesnakes mate in late summer and fall, and give birth to four to 11 live young the next summer. Females and their young remain together for one or two weeks.

NAU professor Erika Nowak has extensivly studied the Arizona black rattlesnake and she, along with other researchers, project a 40 percent loss of range for the snake as the climate warms in Arizona. The most extreme losses of habitat would be at the lower elevation sites.

Largent said the viability of the Arizona black rattlesnake is important to the forest ecosystem, and if the population of the rattlesnake decreases there will be a ripple effect in the food web.

“They’re a predator, so anytime you lose a link in the chain you start to have trophic cascades,” he said. “They eat lizards, small rodents, birds. So, a lot of times you don’t fully understand the effect until it happens, until it’s too late. So, the key is to keep species that exist on the landscape, so we don’t have that.”

Christman said studies have found that one of the small rodents that the Arizona black rattlesnake eat are mice from the Peromyscus family.

“These mice include the mice that carry Hantavirus,” Christman said.

Rattlesnakes are vulnerable to being killed by those who view them as dangerous pests rather than the important predators they are, Christman said. In Arizona, hunters are limited to four rattlesnakes per year.

“If we can educate people so they know they’re in the animal’s environment and they don’t need to kill it…,” Christman said. “I get it if it’s in your backyard, but if you come out to visit the woods, then give it some space, let it do its thing.”

How bad is it if I get bitten?

Although data on specific bites from rattlesnakes is elusive, the Center for Disease Control estimates there are approximately 8,000 venomous snakebites each year in the U.S. — these typically result in about five deaths.

Most of these fatal bites are attributed to the eastern and western diamondback rattlesnake. Copperheads account for more cases of venomous snake bites than any other North American species; however, their venom is the least toxic, so their bite is seldom fatal.

More photos are available at the Kaibab Flickr page.