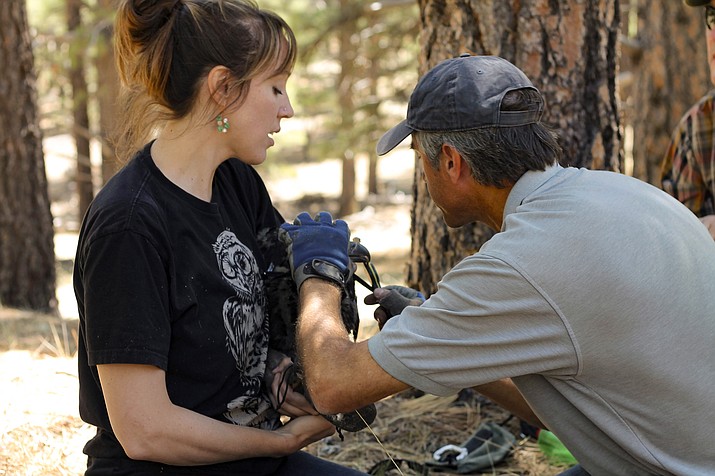 Kyle McCarty (right) measures the leg of a bald eagle chick to determine its gender before placing a permanent identification band on the bird. (Loretta Yerian/WGCN) 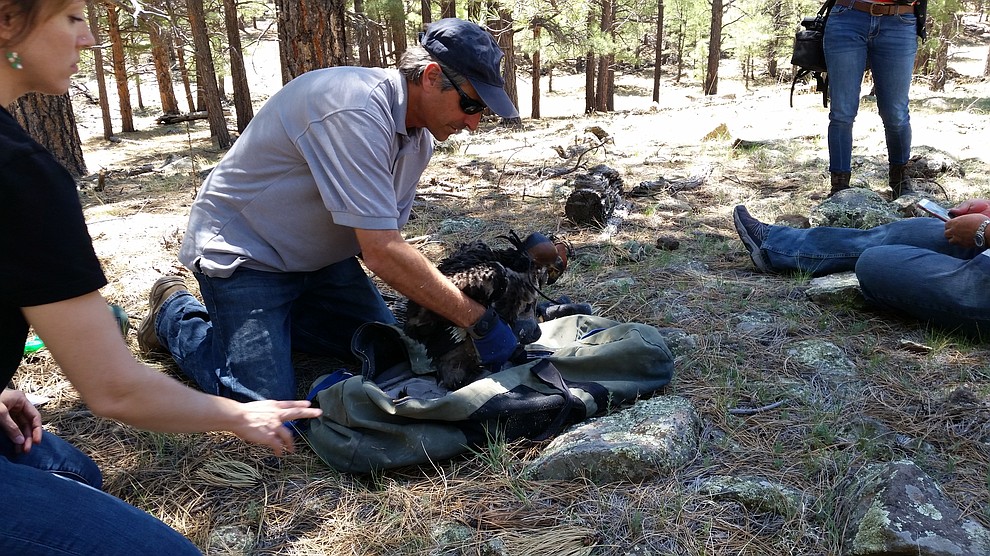 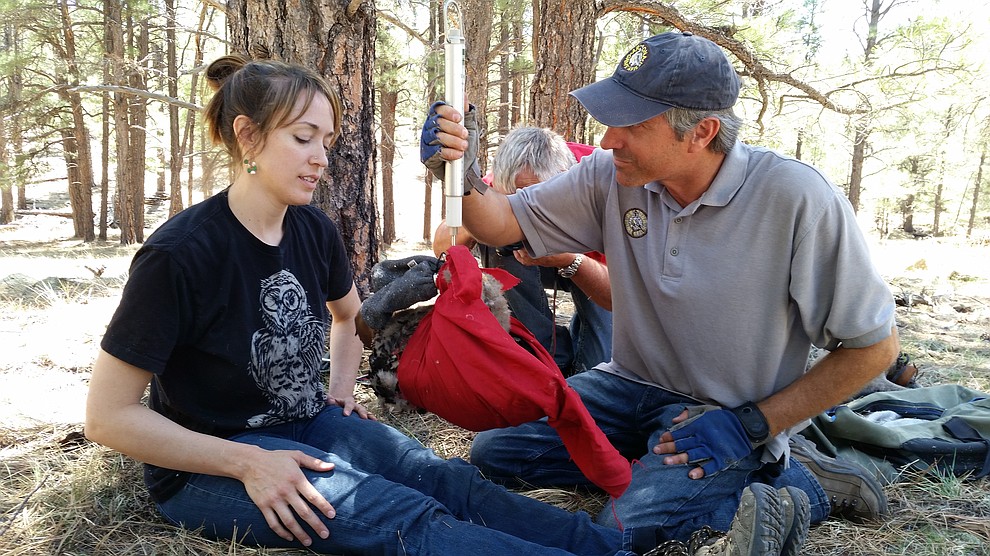 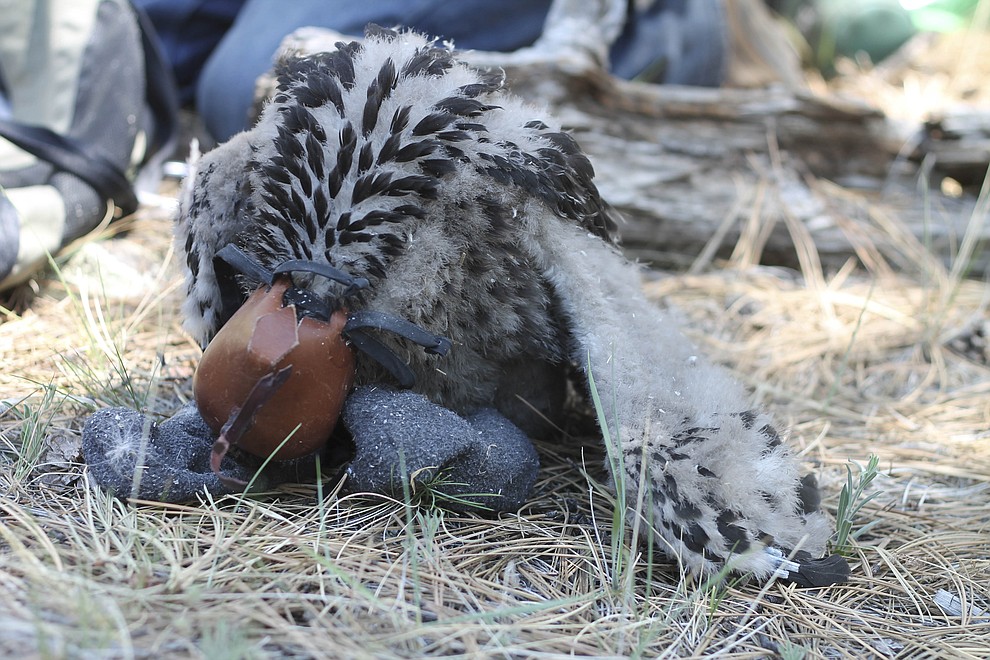 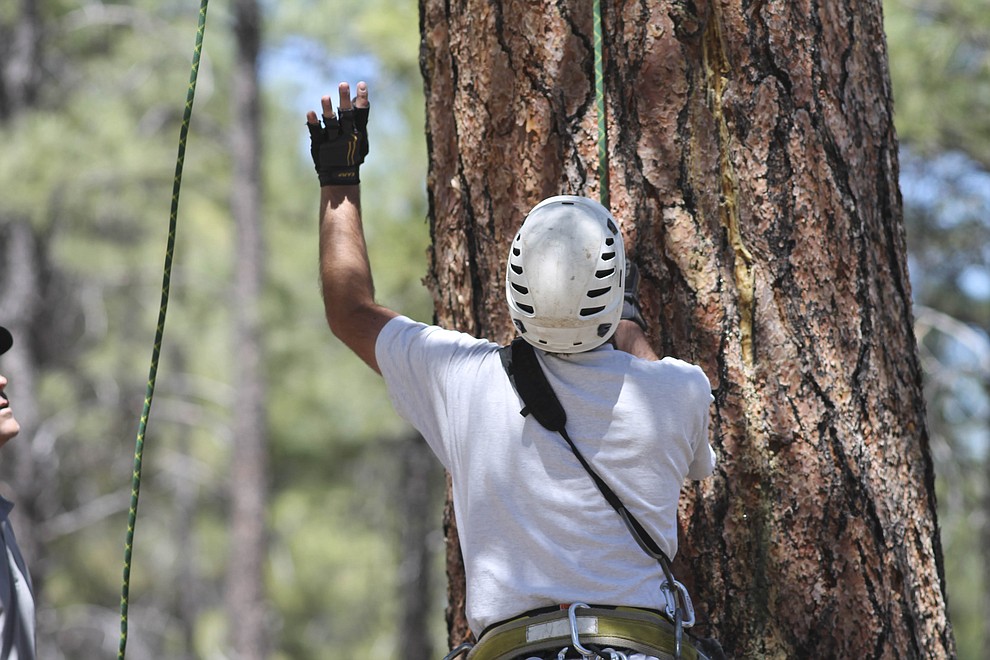 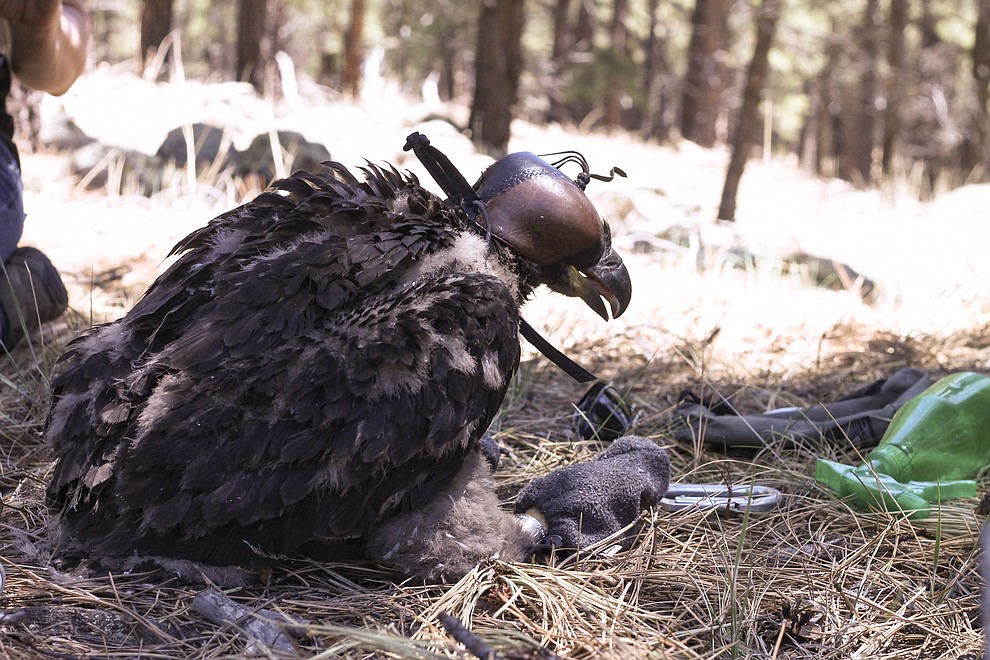 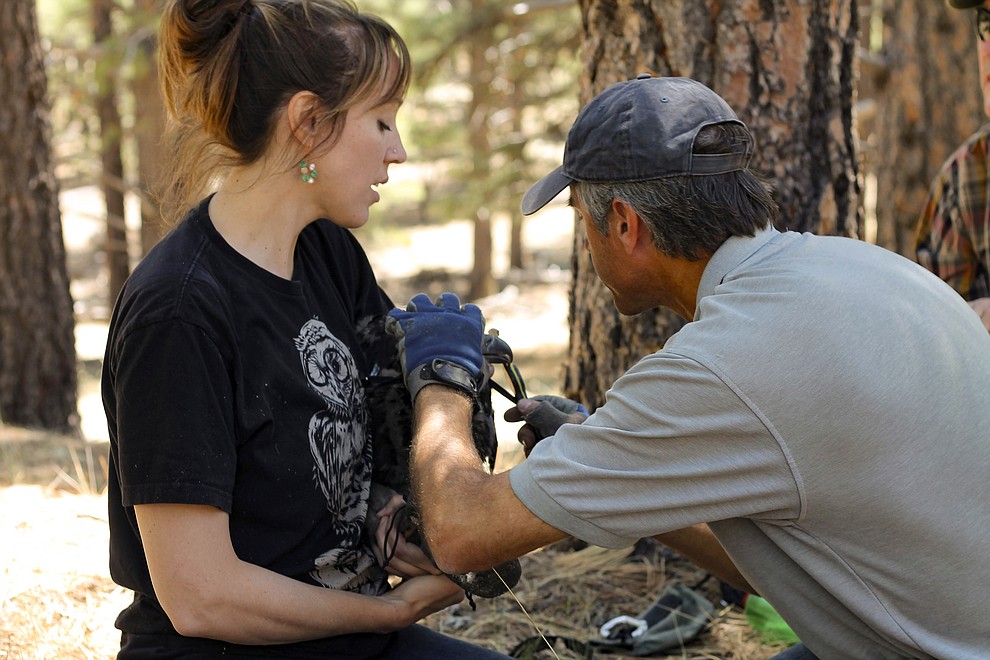 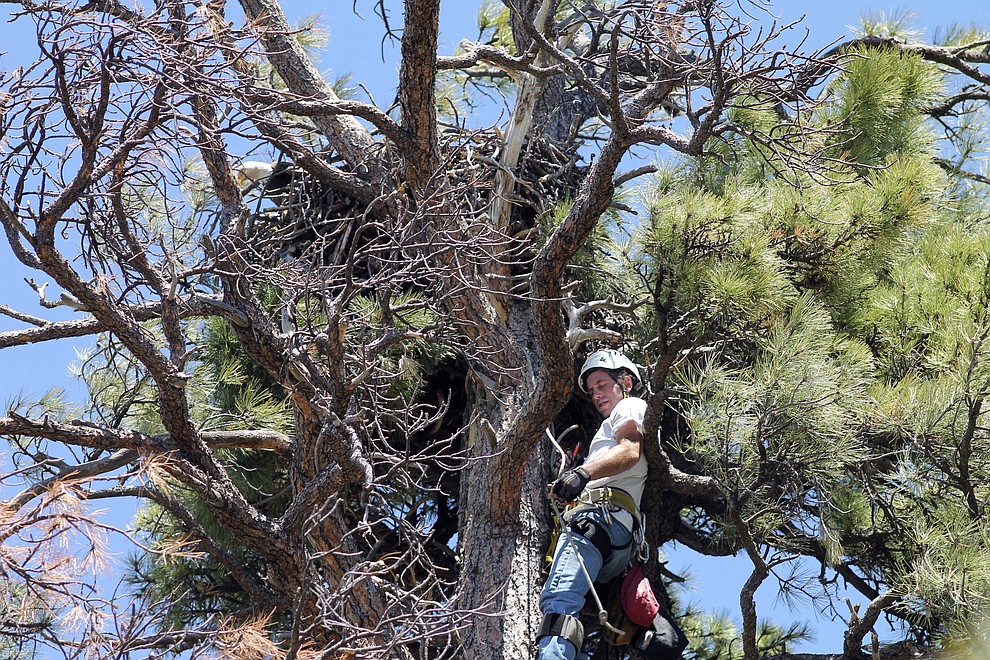 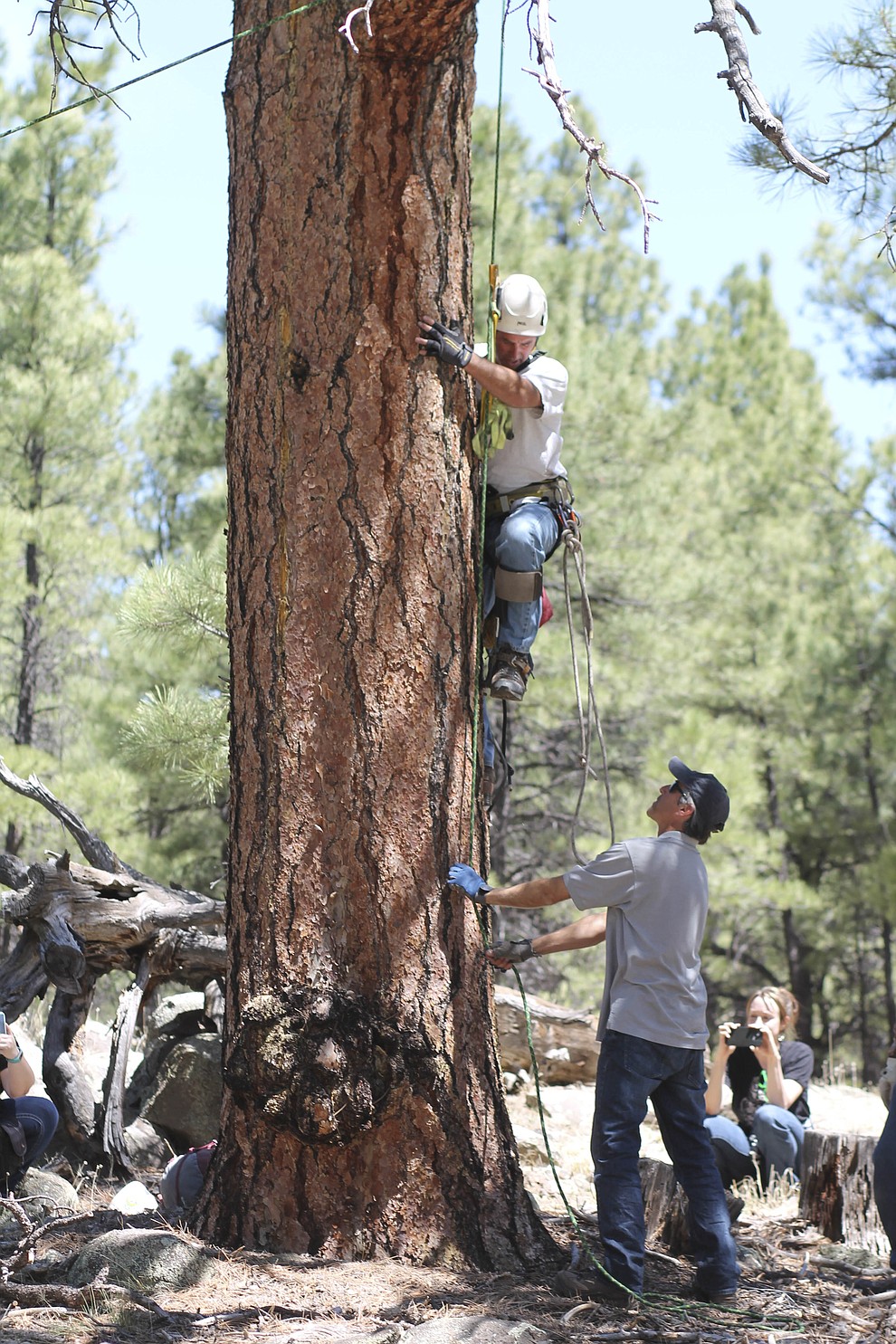 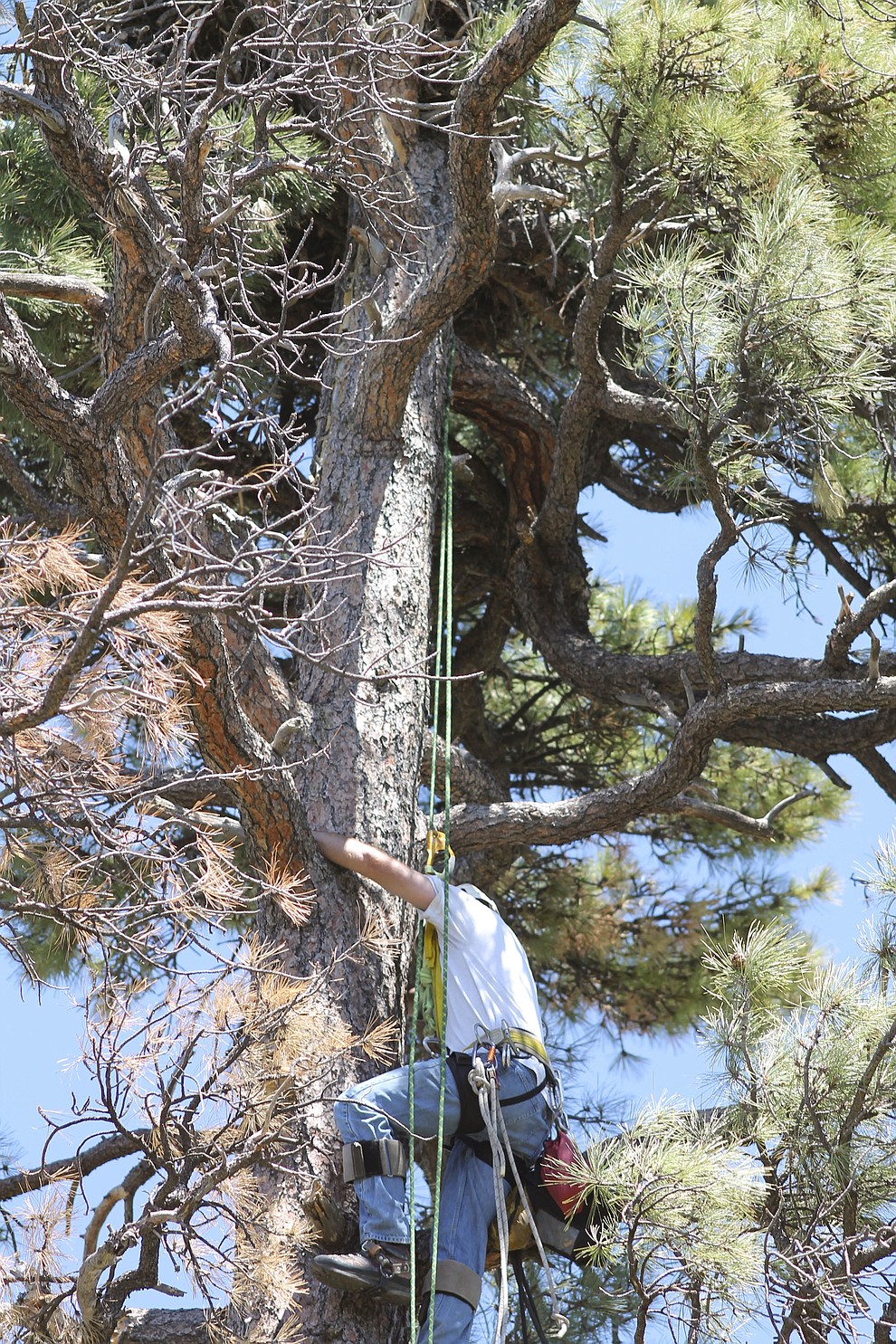 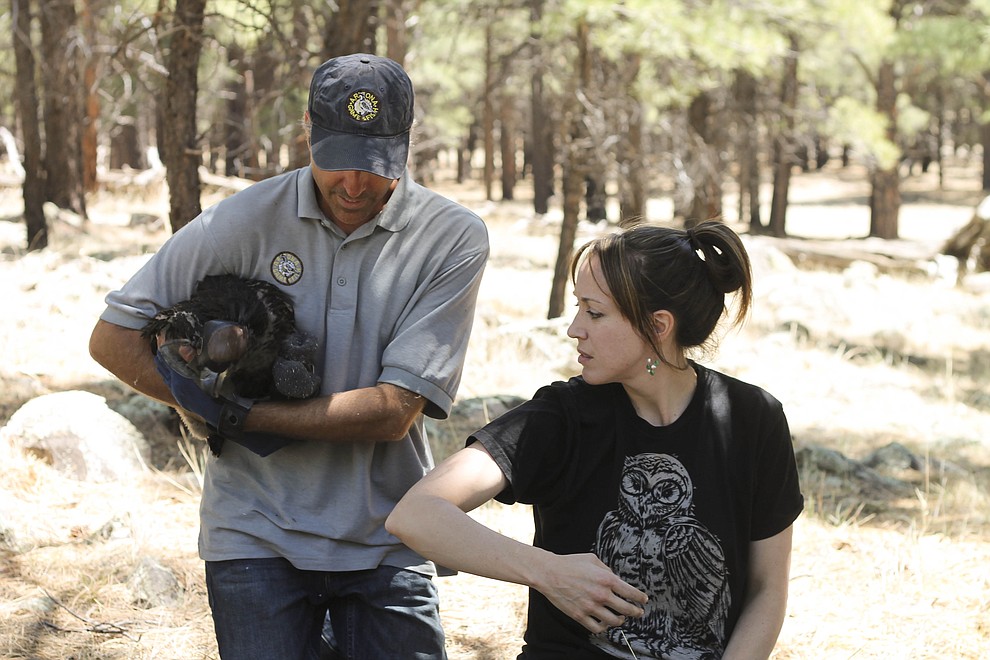 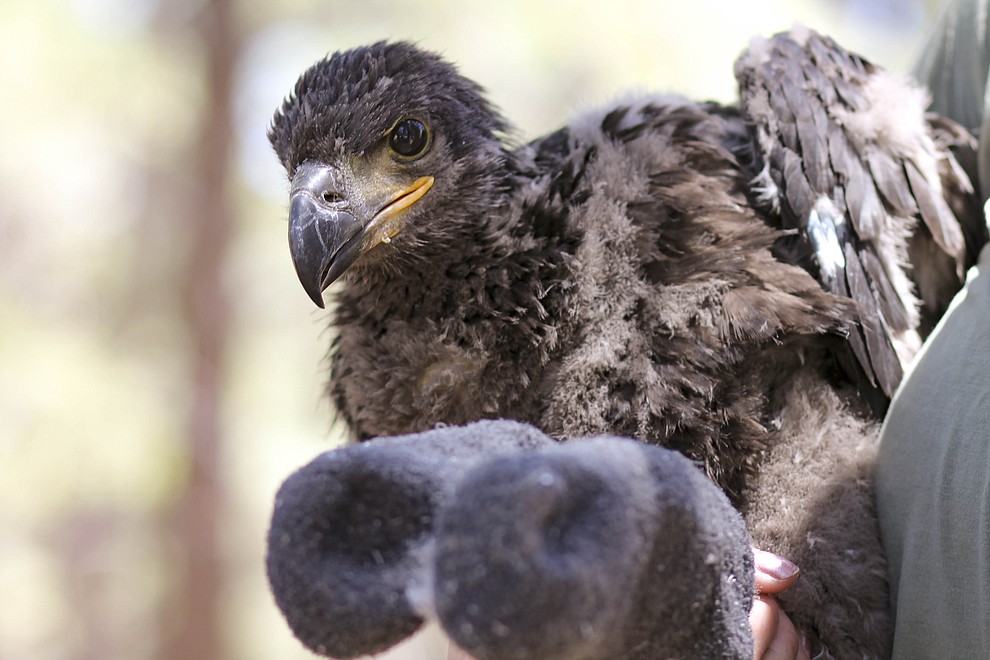 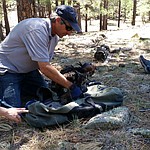 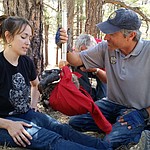 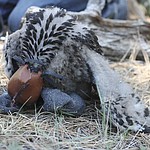 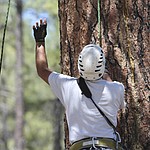 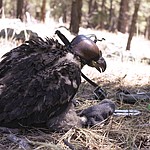 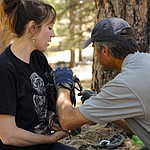 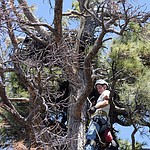 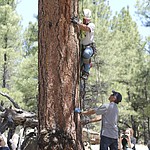 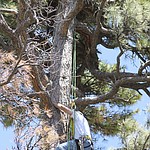 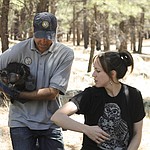 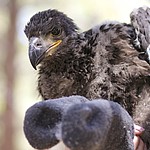 FLAGSTAFF, Ariz. — On a typically sunny, breezy spring day, a group of raptor experts, game rangers, photographers and reporters hiked from the banks of Flagstaff’s Lake Mary into the Coconino National Forest.

The destination: a bald eagle nest located in the tallest tree on the bluff.

The mission was to band the bald eagle chicks, who are now about 5 weeks old and roughly the size of a large chicken. The timing is crucial, said Kenneth “Tuck” Jacobson, raptor program coordinator for the Arizona Game and Fish Department.

Reaching maturity at about five years of age, bald eagles are one of a few bird species that mate for life, according to the National Audubon Society. They practice an elaborate courtship ritual called a cartwheel display, and will usually remain together until one of the pair dies, at which time the remaining member of the pair may take another mate and continue to produce offspring.

“We have a very narrow window, so we try to time it when they’re about five and a half weeks old,” he said. “They’re old enough for the parents to leave the nest for a short time but not old enough to where they want to jump out.”

At this point, they’ll be about half the size of a fully-grown bird, he said.

After locating the tree, Jacobson straps into a harness, helmet and climbing spikes for his ascent up the tree — the nest is located about 50 feet up, nestled on the branches of a ponderosa pine tree. Once he reaches the top, Jacobson will fit the chicks with booties, which cover their talons to prevent injuries to themselves or the crew. He also secures them with a special hood — taking away the birds’ vision renders them completely calm, which is crucial for the next step: lowering them carefully down to the ground in a duffel bag to begin the banding process.

While the eagle chicks are being attended to on the ground, Jacobson will remain at the top of the tree to observe the nest, searching for evidence about the birds’ overall health and what they’ve been eating. He will also remove any debris in the nest, such as strips of cloth, trash or other inorganic materials that don’t belong.

On the ground, AZGFD eagle field project coordinator Kyle McCarty carefully removes the two eagle chicks from the duffel bag and places them on the ground, where they remain almost inanimate. McCarty said eagles, along with other birds of prey, rely primarily on their vision — their sense of hearing is also decent, but their sense of smell is poor. Because their main source of gathering information has been removed, they don’t struggle or understand their surroundings very well.

McCarty said the eagle chicks are likely the offspring of a pair of eagles that has been occupying the nest for the last three or four years.

“These adults unfortunately don’t have bands, because we aren’t able to band every chick, but they probably are (the same pair),” he said. “Over the years, we’ve learned that they will return to the same territory every year if the nest hasn’t been disturbed.”

Reaching maturity at about five years of age, bald eagles are one of a few bird species that mate for life, according to the National Audubon Society. They practice an elaborate courtship ritual called a cartwheel display, and will usually remain together until one of the pair dies, at which time the remaining member of the pair may take another mate and continue to produce offspring. Lifetime mating isn’t a short-lived experience, either — McCarty said the oldest bald eagle recorded by AZGFD is about 31 years old. The average lifespan is somewhere around 15-20 years.

Banding the eagle chicks is a simple process. An official silver AZGFD is placed on one leg, while a higher-contrast blue band is placed on the other — that one is much easier to see for identification purposes. Before placing the bands, McCarty measures the chicks’ feet, which is generally the easiest way to determine the sex of the birds. Unlike most mammals and other birds, the male is the smaller of the two sexes. According to the National Eagle Society, the female bald eagle is about 25 percent larger than the male, weighing in at about 10 to 14 pounds. Males weigh in at anywhere from 7 to 13 pounds.

The chicks, one about five and half weeks old and the other slightly less, already weigh six and seven pounds, and McCarty determined from leg measurements that they are both likely male. McCarty said the age difference is because bald eagles don’t typically lay both eggs at once, but instead will lay an egg and begin incubating it until the next egg is ready.

Once the eagle chicks are measured, weighed and banded, they will be hoisted back up the tree and placed back into the nest. McCarty said once the parents — who have been perched nearby and circling overhead for the entire process — find the chicks back in the nest, life will continue as if they had never been disturbed.

In another five to seven weeks, the chicks will fledge — jump out of the nest to learn the graceful swooping and gliding motions eagles are known for. They may hang around the nest territory for a few weeks after that, but McCarty said they will then disperse and find their own territories and establish their own nests.

According to the Raptor Resource Project, a study of nearly 900 bald eagles found that, on average, young birds will disperse about 42 miles from their home nest, meaning these chicks will likely stay and reproduce in Arizona, although it’s possible they could go farther.