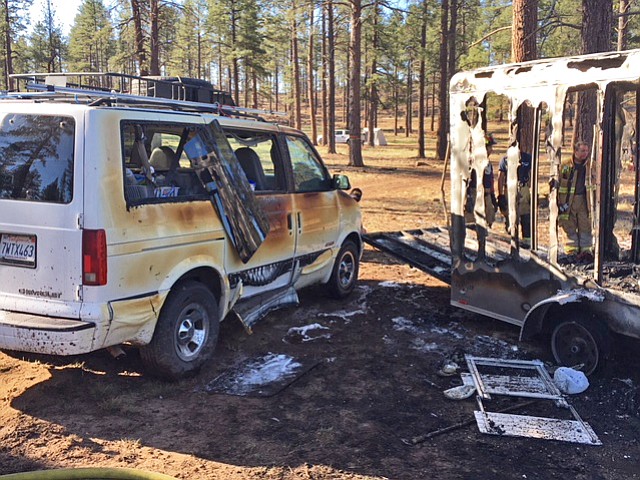 A 74-year-old man sustained serious burns in a trailer fire on Forest Road 140 south of Williams May 5, according to the Coconino County Sheriff’s Office.

At 6:52 a.m., officers received a call of an explosion and subsequent fire with a man injured near Dogtown Lake.

Firefighters with Williams Volunteer Fire Department and an officer from Williams Police Department responded to the scene. It was later determined to be outside the city’s jurisdiction and CCSO deputies also responded.

“Initially we thought it was at Dogtown Lake and we were going to be assisting the city, but it turns out it was in the county,” said CCSO Sergeant Ethan Mitkowski.

Williams Fire Department was able to extinguish the trailer fire and Guardian Air was requested to transport the patient.

Officers located a landing zone for the helicopter while Williams Fire and Kaibab National Forest ensured the fire did not spread.

An initial investigation and interviews with the patient led officers to believe the man was attempting to light a propane heater in the modified utility trailer when there was an explosion. The explosion and subsequent fire destroyed the trailer and left the man with burns over 40 percent of his body, according to Mitkowski.

“We are assuming it was propane inside the trailer and the fire just caught from there,” Mitkowski said.

Mitkowski said bystanders who were camping nearby heard the explosion and called 911. The injured man was visiting the Williams area and originally came from San Jose, California.

The man was transported to the Maricopa Integrated Health System Burn Center, where he was in critical condition.