Vikings baseball wins two at state, advances to 1A semifinals 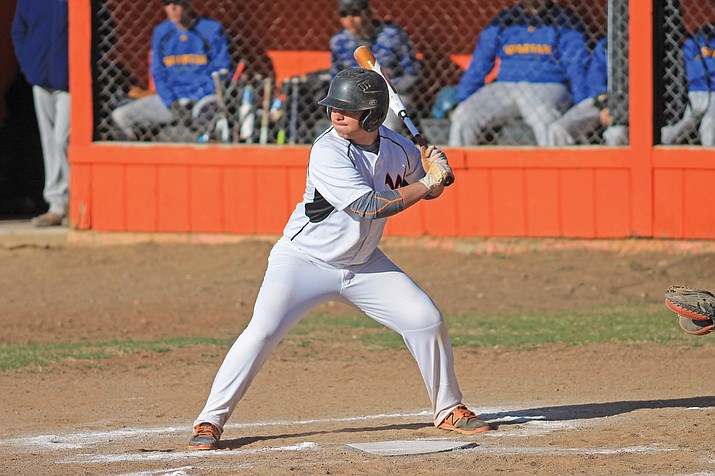 Tate Grantham bats in an earlier season game. The Vikings beat St. David May 5 to advance to the 1A State semifinals. (Wendy Howell/WGCN)

The Williams Vikings baseball team won a pair of games in the 1A state playoff tournament May 4-5 at the Goodyear Baseball Complex to advance to the semifinal round.

In the opening game, Williams topped No. 12 Fort Thomas 10-0 in six innings as Vikings starter Joe Zabala tossed a no-hitter, striking out six against just one walk.

Zabala was matched initially by Fort Thomas pitcher Kendall Stanley, the overall 1A strikeout leader on the season with 118. Stanley kept Williams off the board through the first three innings, striking out five while limiting the Vikings to a pair of singles.

But Williams was able to put three runs on the board in the fourth when Zack Perkins was hit by a pitch to lead off the inning, and Payce Mortensen and Frankie Kramer followed up with a pair of singles.

Fort Thomas mounted their most serious threat of the day in the top of the fifth, as the leadoff hitter reached on an error and the next batter walked. However, Zabala was able to coax a ground ball to shortstop Carsten Brinkworth for a 6-4-3 double play, and then struck out the next hitter to strand the remaining runner at third.

The score would remain 3-0 until the bottom of the sixth inning, when the Vikings exploded for seven runs on five hits, bringing 11 batters to the plate before Tate Grantham finally raced home on a wild pitch to complete the walk-off, mercy-rule victory.

The Williams offensive attack was led by Mortensen with three hits, two runs scored and a stolen base. Kramer and Brinkworth also chipped in with two hits apiece, while Zain Grantham scored two runs and drove in another two.

The next morning, with temperatures rapidly climbing toward 100, the Vikings triumphed 5-3 over No. 5 St. David in a hard-fought nail-biter.

After the teams traded runs in the first inning, the Vikings were able to tack on a single run in each of the second and third innings. The 3-1 lead was short-lived, however, as St. David responded for a pair of runs in the bottom of the third.

After these shaky first few innings in which he hit three batters and racked up 57 pitches, Kramer settled in and kept St. David hitless and run-less the rest of the way. He needed just 45 pitches over the final four innings and was able to complete the game before reaching the pitch count limit.

With the score tied at 3-3 in the top of the fifth, the Vikings loaded the bases with nobody out on a Mortensen single and a pair of walks by Michael McNelly and Zain Grantham, with the heart of the order coming up to bat. But the 3-4-5 hitters came up empty, as St. David pitcher Kason Jacquez was able to wiggle out of the jam.

The score would remain tied until the top of the seventh, when Zain Grantham walked and advanced to second on an errant pickoff attempt, again putting a runner in scoring position with the middle of the order coming up. This time the big bats delivered, as Perkins and John Bryant stroked back-to-back doubles, driving in the two runs that would ultimately provide the margin of victory.

The Vikings’ first four hitters (Mortensen, Zain Grantham, Perkins and Bryant) all had four hits apiece to lead the offense, while Grantham also scored twice, including the go ahead run in the seventh.

Following the two victories, Williams will move on to the semifinal round May 11 at 6:30 p.m., when they will face No.1 Bagdad in a rematch of the regular season finale. This game will also take place at the Goodyear Baseball Complex. If they are able to get past Bagdad, the Vikings will then advance to the state championship game, scheduled for 4 p.m. May 14 at Tempe Diablo Stadium.