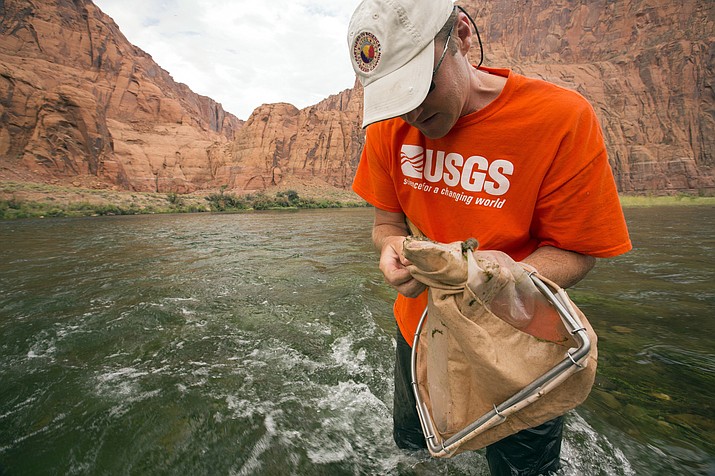 FLAGSTAFF (AP) — Any great fishing hole depends on the health and well-being of its bugs.

In a key stretch of the Colorado River below a dam on the Arizona-Utah border, anglers have been pulling out long, skinny trout that don’t give up much of a fight with a hook in their mouths.

Turns out, they don’t have enough to eat, scientists say.

Researchers with the U.S. Geological Survey are hoping a monthslong experiment to release low, steady flows of water from Glen Canyon Dam will give the eggs that bugs lay just below the water’s surface a better chance at survival. It starts this weekend.

Scientists are anticipating a 26 percent increase in black flies and midges by next summer, and the eventual return of bigger bugs seen in other stretches of the Colorado River that largely have disappeared from a prized fishery known as Lees Ferry. When insects thrive, so do fish, bats, birds and other predators, scientists say.

Insects attach their eggs to hard surfaces like rocks, wood or cattails near the river’s shore. Fluctuations in the water for hydropower create artificial tides that can expose the eggs and dry them out.

If they’re not back underwater within an hour, they die, said Jeff Muehlbauer, a research ecologist with the Geological Survey.

The so-called bug flows are part of a larger plan approved in late 2016 to manage operations at Glen Canyon Dam, which holds back Lake Powell. The plan allows for high flows to push sand built up in Colorado River tributaries through the Grand Canyon as well as other experiments with the flow that could help non-native trout.

“It’s an ongoing endeavor to understand first, what’s the status of all these different resources — the fish, the sandbars, the cultural resources — and then making adjustments based on how the ecosystem is changing,” John Hamill said, a volunteer with Trout Unlimited who helped work on the plan.

The flows won’t change the amount of water the U.S. Bureau of Reclamation must deliver to three states and Mexico. The lower water levels on the weekend would be offset by higher peak flows during the week, the agency said. Still, hydropower is expected to take a $335,000 hit.

“We’re not wasting water or anything in the name of bugs,” agency spokesman Chris Watt said. “We’re using the flows that we’re required to send down the river. We’re just fluctuating when they go to possibly assist the insects.”

Scientists say they are hoping to see positive responses from Glen Canyon Dam to Lake Mead on the Arizona-Nevada border.

Anglers typically fish a 16-mile stretch of the Colorado River below the dam, either in a walkup area or by taking a boat upstream closer to the dam. While they have caught fish that were hearty and longer than 14 inches, Hamill said the “sorry condition” of the fish at times has driven anglers elsewhere.

“That’s been a challenge,” he said. “It hasn’t been a very dependable fishery.”

When Ted Kennedy started working for the Geological Survey in 2002, other scientists noted the curious lack of stoneflies, caddisflies or mayflies throughout the Grand Canyon and the low numbers of other bugs.

He began studying the larvae stages of bugs, then asked river guides and students for help studying the adult stages.

Since 2012, the volunteers have set out plastic containers with a battery-powered black light for an hour each night, luring bugs and tracking the conditions. They deliver bottles of bugs to Geological Survey scientists.

What they found is that fish have an unstable food source. That means they are longer, skinnier, can’t swim well and don’t have the energy to reproduce or fight.

“When things are bad for midges, there’s not much else to take its place,” said Kennedy, a research ecologist.