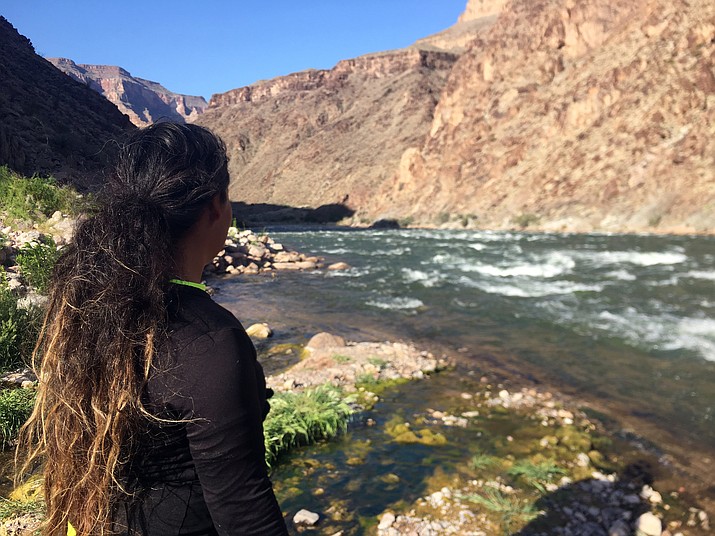 Patricia Cesspooch scouts the first set of rapids her rafts will encounter for a two-day excursion along the Colorado River in the Grand Canyon. (Lillian Donahue/Cronkite News)

GRAND CANYON, Ariz. — As downstream rapids roar, multicolored rafts line Diamondhead Beach at the base of the Grand Canyon.

Patricia Cesspooch stands out in this scene, surrounded by men and machinery, hand-rigging her two inflatable yellow rafts before guests arrive.

Cesspooch, a member of the Hualapai Tribe, has long loved her ancestral land and dreamed of making her living on the Colorado River. In early March, Cesspooch and her partner, Rickey Massey, started Grand Canyon 9 Rapids, an independent whitewater rafting business, a goal she has been pursuing much of her life.

“I started playing around with the idea when I was about 23 years old,” said Cesspooch, who’s now 54.

She grew up with the Grand Canyon as her backyard and was drawn to the river as she watched her grandfather navigate it.

“I used to see my grandfather coming in with one of the larger companies, and I wanted to do that,” Cesspooch said. “So at the age of seven, I did hop on the river with complete strangers. I got in trouble after that.”

As she grew older, she worked toward her goal of starting her own business, finally getting her rafting permit in 1998. However, starting her own company on the Hualapai Reservation proved more challenging than she imagined.

The tribe stopped her business from opening in 1999 when the Tribal Council declared a moratorium on all new rafting companies operating on the reservation — yet still allowing the one and only tribe-funded rafting company to continue.

Cesspooch did not give up. She made and sold jewelry for years, saving money to one day, hopefully, be her own boss.

That day came in 2014, when the moratorium was lifted, allowing Cesspooch to start her company. Not an easy feat for an independent entrepreneur and a Native woman.

“It’s been a long journey. It really has,” Cesspooch said, tearing up. “I do get emotional about it because I’m here. That’s the great thing.”

Grand Canyon 9 gets no financial help from the tribe, making family and guests crucial to its survival.

However, Cesspooch is not alone in her efforts to get her rafting business off the ground.

Although she hasn’t received support from her tribe, she has received it from other entrepreneurs.

“It’s just what neighbors should do,” said John McEnulty, owner of Grand Canyon Caverns and Inn, a nearby lodge and attraction. He has partnered with Cesspooch to provide housing for guests just outside the reservation.

The name Grand Canyon 9 comes from the nine sets of rapids encountered each trip on which Cesspooch, her small crew and guests travel more than 53 miles down the Colorado on either one or two-day excursions.

Before hitting the rapids, Cesspooch tells her guests to leave all their worries behind on the beach. It’s advice she has learned firsthand.

“You feel a cleansing, that’s what I feel,” she said.

“All my troubles and worries, they’re not on that water, and that’s the greatness of it all.”