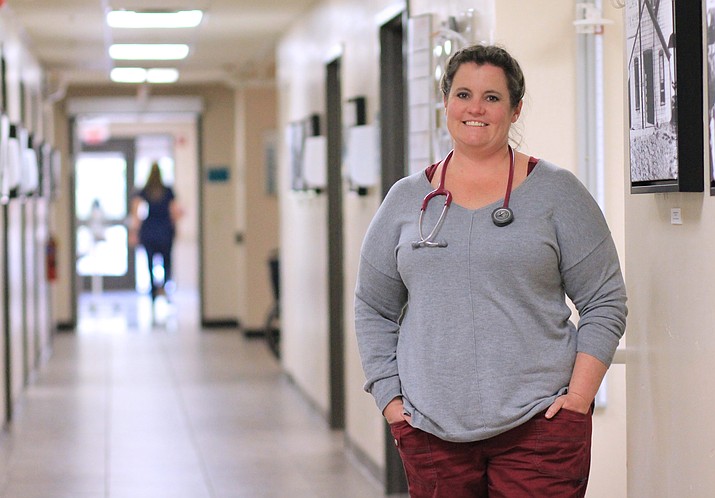 Crystal Gonzalez is an RN at North Country HealthCare in Williams. Gonzalez grew up in Williams and decided to return here after completing her nursing credentials. (Wendy Howell/WGCN)

When Crystal Gonzalez was a child she said she always had an answer when someone asked “What do you want to be when you grow up?”

Although Gonzalez kept her dream of being a nurse intact after she graduated in 2001, her path veered from joining the military to becoming an Emergency Medical Technician to eventually completing her registered nursing degree.

“I just was trying to figure it out,” Gonzalez said. “I didn’t know any nurses, there was no one in my family that was in that field either.”

Gonzalez first began working at NCHC after the birth of her children so she could be closer to her family.

“I worked as a CNA (certified nursing assistant) for a short time here because my son stayed here in town with my mom,” Gonzalez said.

She returned to FMC for a few more years before returning to Williams and working full-time at NCHC.

“I was so crazy busy at the hospital (FMC) in the ER,” Gonzalez said. “I loved it, but it was crazy at work and crazy at home with the boys. I needed a break.”

Gonzalez said she has enjoyed working at NCHC and returning to Williams.

“You come to work and you’re at work as much as you are home, but it’s all these girls… all of my coworkers are just like family,” She said.

As Gonzalez gained more experience at NCHC, she said her supervisors and coworkers encouraged her to further her education and become an RN.

“Nell (Brown) and Nora (Dimuria) pushed me,” Gonzalez said. “Nell is amazing, she’s our supervisor but also our role model.”

Gonzalez decided to apply for the nursing program at Coconino Community College (CCC) and over several years she gradually completed her requirements for the degree.

“While at the hospital I could see the nurses coming out of Coconino and see what a good program it was,” she said.

"This is my community, this is where I grew up.”

With her RN degree, Gonzalez continues to work as a full-time primary care and urgent care nurse at NCHC, and part-time as a labor and delivery nurse at FMC.

“I love that I get to go hold babies and take care of the mamas,” Gonzalez said. “I like to keep up to date at the hospital and keep some of the certs of for here.”

At FMC, Gonzalez gains more experience with skills such as fetal monitoring and neonatal resuscitation since there is a higher volume of patients there.

“I like it there, but Flagstaff is so big. Sometimes I know my patients there but almost every day here (NCHC) I have quite a few patients that I know,” she said.

Gonzalez said that is her favorite part of being nurse.

“This is my community, this is where I grew up,” Gonzalez said. “So, its family — you’re treating your family, your friends and even the teachers that taught me in high school.

Although Gonzalez loves her job and her coworkers, there are tough moments that come with being a nurse too.

“We have those diagnosis that we have to relay to the patients,” Gonzalez said. “Or we hear that a patient has passed, that is tough.”

But Gonzalez said she feels privileged to be a part of a person’s life when they may be going through their most difficult moment.

“It can be difficult because someone will come in with a new cough and you do a chest x-ray and you find its cancer,” She said. “Then you have to tell them but its also rewarding because it’s their most vulnerable state. You were there during that, you get to help them through it and just be there and be supportive.”

Gonzalez said she imagines being in the nursing and medical fields for a long time. Now with her RN degree behind her, she has begun working toward a master’s degree in public health education.

“I like to be a patient’s advocate,” she said. “I tell my patients “I don’t understand what it is to have this, but I understand what I can do to help you.” I think that is what is making me want to do more.”

With a new health clinic on the horizon in Williams, Gonzalez said she is excited to continue caring for patients in Williams.

“The new clinic will be nice for all of our programs,” Gonzalez said. “We are a community health center and I look forward to bringing more health awareness to people.”