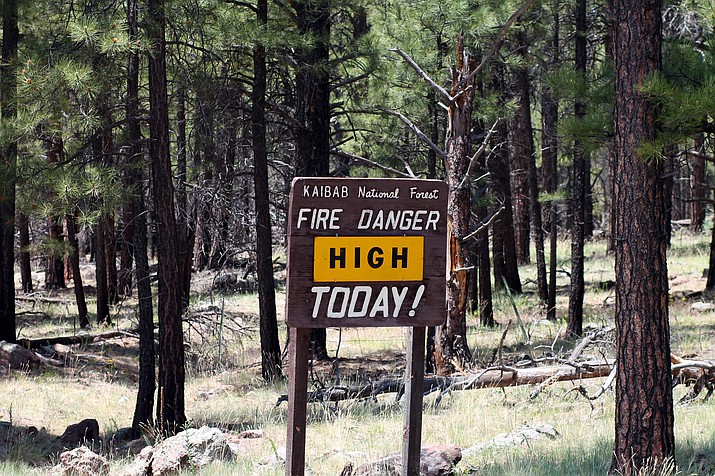 Signs like this one located through the Kaibab National Forest alert visitors to the prevailing fire danger of the day.

The new restrictions limit the number of activities that are typically allowed on the forests and will remain in effect until significant moisture arrives.

The Forest Service uses fire restrictions to help prevent human-caused wildfires and to limit the exposure of area residents and visitors during periods of potentially dangerous fire conditions.

Implementation of fire restrictions normally occurs based on a combination of factors that are carefully measured. Criteria used to determine when to implement restrictions include things such as current and predicted weather, fuel moisture, fire activity levels and available firefighting resources.

Stage 2 fire restrictions prohibit the following across the entire forests, including developed campgrounds:

Visitors may use a device fueled solely by liquid petroleum or LPG fuels that can be turned on and off. Such devices can only be used in an area that is barren or cleared of all overhead and surrounding flammable materials within three feet of the device.

Visitors may aslso operate generators with an approved spark arresting device within an enclosed vehicle (enclosed RV cabinet) or building or in an area that is barren or cleared of all overhead and surrounding flammable materials within three feet of the generator.

Forest officials would also like to remind visitors that having a campfire on the national forest while under fire restrictions is a violation of law requiring a mandatory appearance in federal court and consequent fines and possibly jail time. Visitors should use extra caution when recreating on all public lands during fire season.

An abandoned, illegal campfire was found to be the cause of the Tinder Fire, which started April 27 and has since burned through more than 12,000 acres — including 30 homes — near Payson, Arizona. As of May 7, that fire is 79 percent contained.