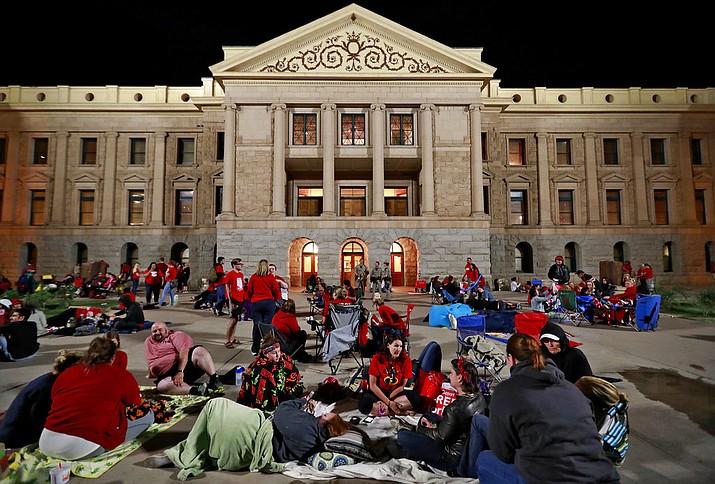 Teachers camp out as the Arizona legislature debates a budget negotiated by majority Republicans and GOP Gov. Doug Ducey Thursday, May 3, 2018, at the Capitol in Phoenix. The budget gives teachers big raises but falls short of their demands for better school funding. (AP Photo/Matt York)

PHOENIX (AP) — Hundreds of thousands of Arizona schoolchildren returned to classes May 4, a day after state lawmakers approved 20 percent raises for teachers and ended a six-day walkout that shuttered most classrooms around the state.

Teachers at a high school in the Phoenix suburb of Mesa lined up to greet students with cheers and handshakes. An elementary school principal greeted students with high-fives on the other side of metro Phoenix.

Educators returning to work at San Marcos Elementary in the suburb of Chandler traded in their red protest t-shirts for shirts with their black and blue school colors and its bear mascot.

Wearing sunglasses and smiles, some San Marcos teachers hugged and wrapped their arms around each others' shoulders to start the day.

Strike organizers called for an end to the walkout May 3 after an all-night legislative session resulted in a 20 percent pay raise by 2020. Most districts planned to reopen May 4 but Tucson's largest district said it would resume classes May 7.

The education funding plan approved by lawmakers shortly before dawn was immediately signed by Gov. Doug Ducey, awarding teachers a 9 percent raise in the fall and 5 percent in each of the next two years. Those increases, which are in addition to a 1 percent raise granted last year, will cost about $300 million for the coming year alone.

Ducey praised the legislation as "a real win" for both teachers and students.

The Arizona walkout was part of a bubbling national uprising over low teacher pay and funding. The movement started in West Virginia, where a strike resulted in a raise, and spread to Oklahoma, Kentucky and, most recently, Colorado.

Thomas said educators should now focus on a campaign for a November ballot measure that would seek more education funding from an income tax increase on the wealthiest taxpayers.

"The budget is a significant investment, but it falls far short" of what the movement demanded,” he said.

Helen Hoffman, a counselor in the Phoenix Union High School District, said she was excited about the end of the strike.

"I'm worried about my students. I'm ready to go back," she said.

Education cuts over the past decade have sliced deeply into Arizona's public schools. Teachers wanted a return to pre-recession funding levels, regular raises, competitive pay for support staff and a pledge not to adopt any tax cuts until per-pupil funding reaches the national average.

The new funding package provides schools with a partial restoration of nearly $400 million in recession-era cuts, with a promise to restore the rest in five years. Other cuts remain in place.

"You know, talk is pretty cheap — it's your vote that counts," Republican Rep. Anthony Kern said. "If Republicans voted with Democrats tonight, you would be walking away with zero."

Democratic Rep. Reginald Bolding urged lawmakers not to congratulate themselves for easing the same crisis they created.

"You can't set a house on fire, call 911 and claim to be a hero. And that's what this body has done," Bolding said.